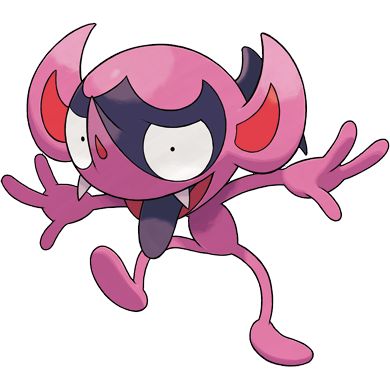 OH! LOOK AT IT! This one was really divisive when it was first revealed, most of the criticism revolving around its perfectly circular head and noodly appendages, but while I like Pokemon with a little more structure, I also like the rubber-hose cartooniness of this rotten little devil, who happens to be the first-ever Dark/Fairy Pokemon! I especially like that long, pointy bat-like nose with the single nostril, which apparently snorts up the "negative energy" emanated when other living beings feel annoyed. Like any classic goblin, gremlin or imp it loves to lurk in houses where it can steal small objects or perform various other pranks!

It also, interestingly, has a single bat-shaped "wing" on the back of its head. This is actually hair. It has basically a bat-wing rat tail. 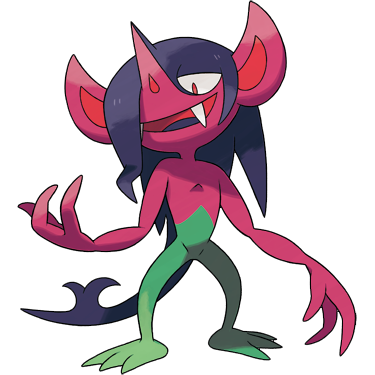 The evolved form, Morgrem...might actually be one of the slickest Pokemon designs I've ever seen? It certainly has more of a musculature to it now, if you hated those noodle limbs, and its hair has grown to give it a scuzzy, greasy emo look that feels really unique among Pokemon, with a nasty spear-shaped end. According to the Pokedex, it'll bow down as if it's begging for mercy before stabbing with its hair-blade. According to its other Pokedex entry, it likes to lure people into forests, but some people think it has the power to make crops grow. Even though it isn't based on any specific legend, this is finally a fairy type that feels directly inspired by authentic fairy folklore. 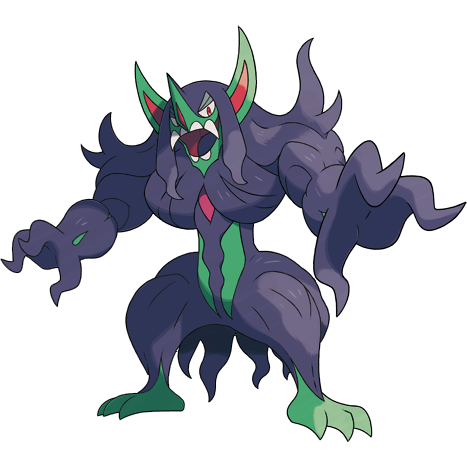 I miss Morgrem's stoner charm and pinkish skin when it evolves, I have to say, but there's no denying Grimmsnarl is an almost startlingly diabolical looking Pokemon. Some have expressed that it's so humanoid, so detailed and so sinister that it doesn't really fit into Pokemon's style, but we're so far beyond that having any real parameters anymore, aren't we?

What matters is you've finally got yourself a perfect Pokemon design if you're a particularly huge fan of all things we might classify as "goblinoid," and I personally think every aspect of it looks good. I think the pink interior of its sickle-shaped nose and ears is a great contrast to its kelp-green skin, I love the lipless teeth and I love the whole wicked effect of that colorful, sharp-edged face framed by thick, flowing black hair. Hair so thick and so flowing, in fact, that it wraps around the creature's limbs and canonically functions as an external "muscle structure," capable of unraveling into tentacles and blades as the ghastly gargoyle pleases! A wretched, tangly hair-clot green ghoul would have been a memorably creative and legitimately scary concept in any media, but I'm glad it wound up being a Pokemon.

It does, of course, also have a Gigantamax form, with an even more obscene amount of hair forming a titanic, lanky black body with even more defined cables of "hair muscle." I do like how its legs don't even end in visible feet anymore, and since its head doesn't appear to have grown much larger, it does seem as though this Gigantamax is almost entirely more hair. 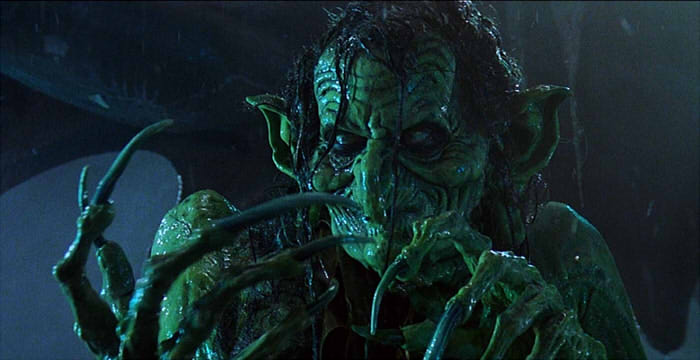 The moment I ever saw this Pokemon and knew that it was dark/fairy, my mind immediately went to the Celtic folklore tradition of monstrous, flesh-eating hags. Green skin, a pointy nose and copious, filthy black hair are all signature characteristics of figures like Jenny Greenteeth or her cinematic cousin here, Meg Mucklebones. These bone-gnashing, swamp-slithering grandmas are some of the most badass and terrifying mythological figures out there, and it's way too cool for the fairy type to finally have - huh? Oh yeah, this is a counterpart line to Hatterene which apparently means these things needed to be male-only, and thus their species is only capable of reproduction through an unnatural union with Ditto.

These two lines already have contrasting "elegant" and "monstrous" motifs, as well as the fact that Hatenna is repulsed by emotion but Impidimp craves and feeds on it. Ask yourself if being gendered counterparts adds anything to make these Pokemon more cool, fun or interesting, or even if you would have guessed they were before you were told. If your response is "who cares? What's it matter?" then that raises a whole other point: I've seen players just about everywhere call it silly to outright obnoxious that these two lines are gender-restricted, but "who cares" is the only counter-argument I've seen. Nobody is arguing that they find it entertaining or that it improves these Pokemon. There's only folks either indifferent or annoyed, and that's never good!

With so much Halloweenly flair and just extremely competent aesthetic execution, this line still gets a 5/5, of course. It's too "cool and badass" to be one of my 6/5's, but it's a neat concept with rad execution. What is it about long, messy black hair that's so scary? I wonder if we'll ever get a ghost type with this kind of theme, like them spookters what come outta the VCR's and stuff. Or one of those youkai made of black hair that gives you the flu. Wait...are we ever going to get more youkai Pokemon, now that the regions are never in Japan anymore? Do they also possibly avoid it because Yo-Kai watch ran with that ball? Man. I'll probably never get my dream Nuppefuhofu Pokemon I guess.