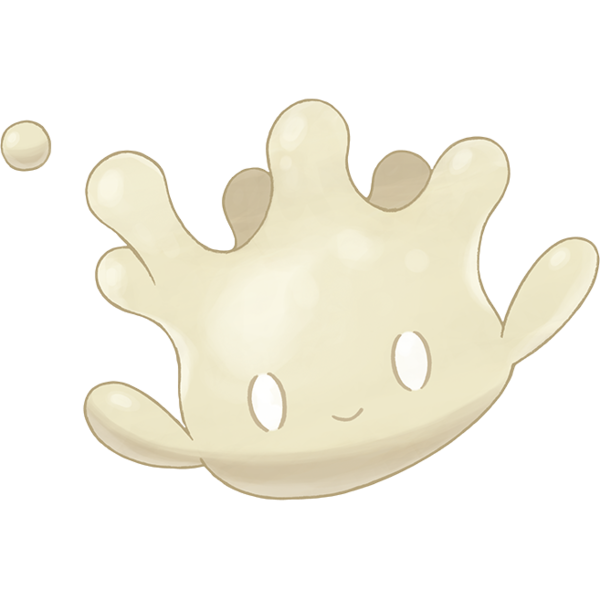 Having already reviewed the Regional evolutions, we skip ahead to Pokedex spot 868 for this particularly weird fairy type, which was somehow born from "sweet particles in the air" and is comprised entirely of cream. It's cute I guess; it's nice to get another Pokemon made out of some sort of goo or fluid. We haven't really had one since almost the first or second generation, not counting Goomy because that's a solid creature with a slimy coat. This is yet another Pokemon that's 100% female for no reason, though. 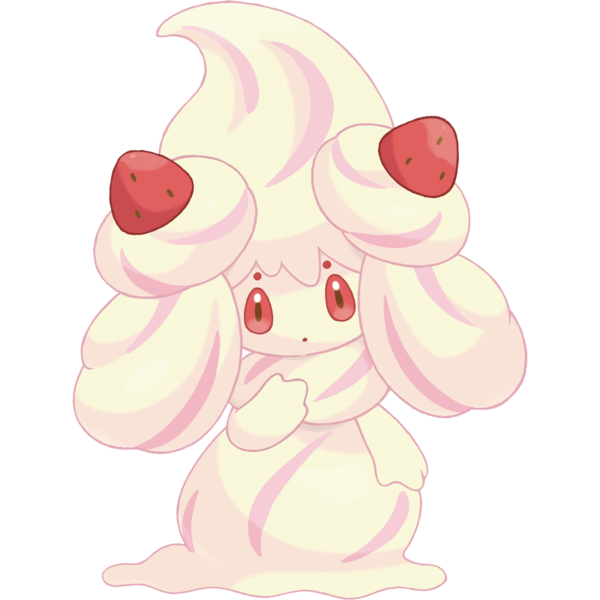 ...Oh, I guess the reason is because its evolution looks like this, further demonstrating that they're doing this now to every Pokemon that looks like a "human" and "pretty." Bleh! It's not all that terribly interesting a design, either. A whipped cream creature is a fun concept that I wish I liked more, I already really like Slurpuff, but this is otherwise such a plain looking humanoid type, and feels a lot like it's only supposed to be a middle-stage evolution to me.

The name seems to draw from the word "Alchemy," and this is because the dang thing comes in nine possible forms and has seven possible "sweets" on its head, giving it a total of 63 designs. To evolve Milcery, you actually just give it the sweet you want and then spin around a bunch. No, really, you spin your character around for different lengths of time at different times of day. It's amusing, but it doesn't seem like fans have latched onto it quite like the game's advertising expected them to; Haterenne line gets all the love I think they expected this one to get.

This was even one of the very first Pokemon they ever used to show off the concept of Gigantamax, which for Alcremie results in a giant wedding cake for a lower body, incorporating every sweet and flavor type in one design. It also attacks with "cream missiles" the Pokedex says contain over "170,000 Kilocalories," which it says are enough calories to knock you out. That's one way of putting it. I'm pretty sure that many in one meal would just implode your liver and kill you.

I actually like the concept of a cake as a Pokemon very much, the sheer wackiness of it and the absurdity of it being one of the "kaiju" forms, but I did say Alcremie feels to me like a middle stage design. When it can't Gigantamax, it's always going to be stuck looking unfinished, just a dollop of whipped cream that we now know was meant to go on top of a giant cake monster, though I guess the G-max is really not so much a cake monster as Alcremie standing on a big cake. Ehh.

My concept for a Pokemon region featured a cake too, but it was really sort of a jelly creature evocative of one, with burning candle-like growths that made an ice/fire type. I never came up with a design that I liked for it, but now that Alcremie exists I scrapped it anyway. RIP :(