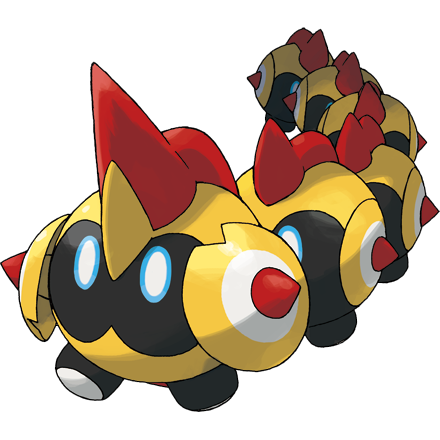 Oh good, a cute one! And another in that rare but classic tradition of multiple Pokemon behaving as a single entity. They felt like a major trope of the series back in the first generation, with Dugtrio, Exeggcute and Magneton, but we've seen very few since besides Klink, Combee and Wishiwashi. It's rarer still that they're detachable from one another, too! When this first leaked, many assumed it was a bug-type millipede sort of creature, before it was revealed to be a procession of funny little ball-shaped buddies and their leader. They're actually pure fighting, and easily the least humanoid looking of the entire type, which has previously deviated from an anthropoid body plan only for the quadrupedal fighting-type beasts and the Crabrawler line, none quite as weird as these waddling orbs.

About the only thing I don't care for is the white, red and gold of their armor, but I love the way the leader's shields look like weird eyespots when it closes them up. This is a very cute, very strange, very fun and unique Pokemon that I think will go down as a long-term favorite for a lot of players.