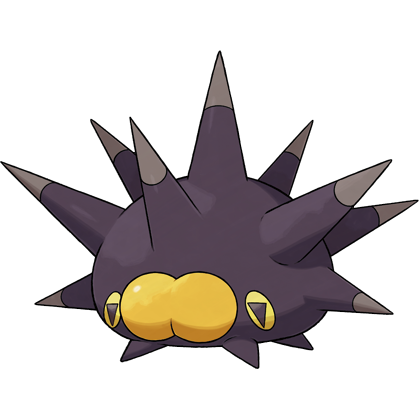 What's that? A sea urchin Pokemon!? Freaking FINALLY! That leaves brittle stars just about the only echinoderm group Pokemon has yet to represent!

Pincurchin is very cute, don't get me wrong, I really like the sad little triangle-eyes level with its "mouth," but, there's nothing really to it but a weak, single-stage, pure electric type Pokemon. It's interestingly enough the only other Pokemon now with Tapu Koko's automatic Electric Terrain, which is cool, but Pincurchin's stats are so low that hardly anybody uses it even for that. And besides having no evolutions, it doesn't have any particularly unique or surprising conceptual gimmicks like the similar Pyukumuku, which sucks because an animal consisting entirely of an orb and some needles has a LOT of potential for stylization. A totally fake "dex leak" leading up to this game actually made mention of a sea urchin, in fact, but held that it would be a poison type and that it would evolve into a whole cluster of connected urchins, which isn't that imaginative but would still be a little more exciting.

Urchins have always been among my favorite creatures, but fortunately not one of my top ten most-wanted in Pokemon or I'd be painfully underwhelmed right now. Maybe it's a teaser for an upcoming form or evolution, but I won't hold out hope. Once again I felt like doodling a couple of my own, just for fun:

I'll still give Pincurchin a 3/5 for being super cute and kind of an underdog, even if that yellow mouth has been likened to a butt by a lot of fans...and actually resembles something much more alarming than that, if you know anything about these animals. The only bright yellow element in a sea urchin tends to be its gonads, the part traditionally consumed as sushi. Like Pyukumuku, this Echinoderm seems to be stylized with its guts oozing out of it, but they're the guts you least ever want to be doing such a thing!

On a final note, because its name is a play on "pincushion," I typed the poor thing as "Pincurchion" instead of "Pincurchin" every single step of making this review, and now at least the page URL is stuck that way forever because changing it would delete all of your disqus comments. Of course, sometimes Disqus just does that to a page for no reason at all anyway.