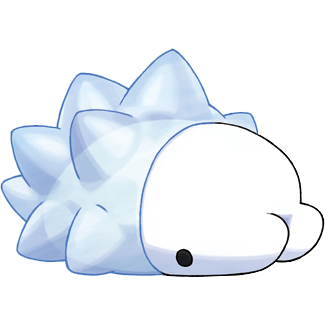 The generation's third bug Pokemon is also its first-ever bug/ice type, and immediately another fan favorite for its pudgy cuteness! The pokedex says it can spit sticky thread "imbued with a frigid sort of energy," and pretends to be an icicle as it sleeps hanging upside-down. It also eats snow to make the icy spikes on its back grow bigger. Like last generation's Cutiefly, Snom seems to owe its existence to the fact that a very particular insect made the rounds across the internet not too long ago, with many clickbait articles latching on to this photo of a jewel caterpillar, whose thick, jelly-like hide can gum up the jaws of predators like ants and beetles!

...Caterpillars, huh? Well, we know what that means. 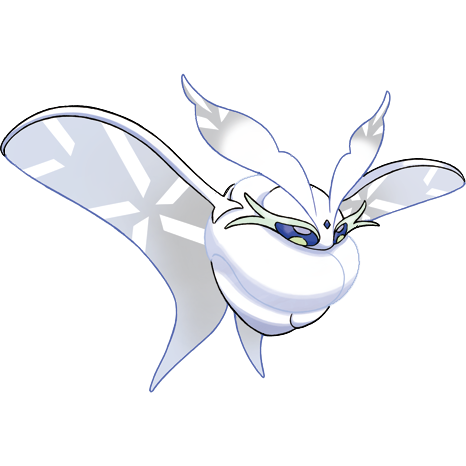 Snom evolves into Frosmoth, which makes Alola officially the only generation to skip adding another member of the Lepidoptera, but it's not a bad design at all; it's the first moth-based Pokemon to really emphasize the fluffy bunny-rabbit fairy look of many real species, I like its big eyelashes and I like its fuzzy limbs forming a puffy coat that conceals any more face it might have. The concept of an ice moth is also an interesting one because moths tend to shed some of their powdery scales as they fly, which video games and Godzilla movies have already used as one of their go-to "powers." It's a natural fit to make these scales into basically "snowflakes," how cute!

My apologies to your mobile data (you use your TELEMAPHONE to read this site?! Weird!) but this is now every single Arthropod or near-Arthropod Pokemon in the franchise. Just look at all that fine chitin! They aren't even limited to the bug type, either; another butterfly may have been the only bug type introduced by X and Y, but Kalos still included a fantastically lovable snapping shrimp and hilariously menacing goose barnacles.

Yet, all three Arthropods we've now gotten from Galar are repeats, and Frosmoth isn't just the third in a row...it's also the last. I've said that there's nothing wrong with repeating animals as many times as they want, but Arthropods make up the majority of the animal kingdom as far as we know, the entire series was inspired by insect collecting and there are entire genera, entire orders of insects, arachnids and crustaceans that they've yet to utilize. For every "bug" in an entire generation to be a rerun is something I genuinely never thought would or even could happen. They never once let me down in this department, and I guess I'd taken that for granted.

I'm surprised to find I'm even one of the only people I've seen so far who has brought this up, and the few of you still trying to argue that I'm unfairly hard on this generation surely have to concede by now that I have good reason to be disappointed. You barely have to see 1% of my reviews or any of the rest of my website to know there's almost no bigger draw to me than NEW ANIMAL REP every game. I wish more Pokemon were non-specific monsters, too, but seeing which real-world creatures get a brand new Pokemon treatment is something I thought a lot of other people got excited for too; that both the fandom and the creators put it pretty high on their priorities list.

Sword and Shield threw out a gameplay aspect I thought was the most important, and a lot of commenters insisted that was the only reason I didn't like its Pokemon that much either. But it also foregoes something I care about a lot from the Pokemon themselves, too. There's always been a long list of creatures I've always wanted as "dream Pokemon," and all seven generations checked off several of them at once until Galar, with yesterday's sea urchin being just about the only one.

At least this has inspired a special side-feature for tomorrow that maybe some of you will find fun...