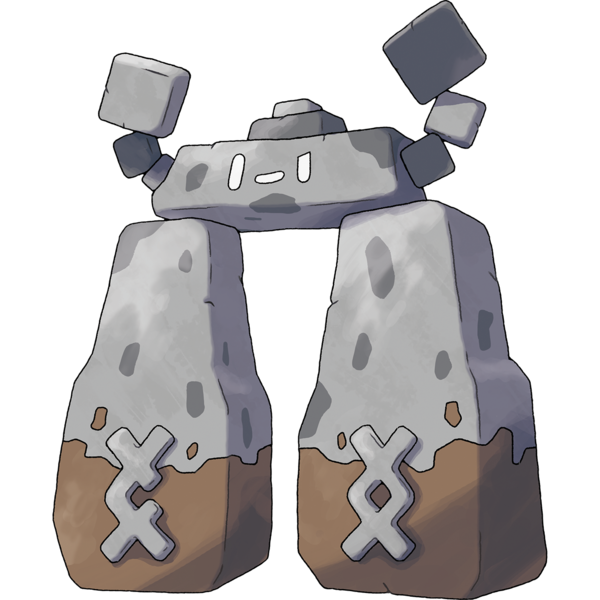 I've always liked object-based Pokemon a lot; I can't think of any I've given a negative rating to before. I like the idea of a "stonehenge" Pokemon, too, I think it's a concept with potential! Stonjourner, however, is another of Galar's Pokemon with that "half baked" feeling to me.

You know what all these Pokemon have in common? I've seen all of them described at least once as "LITERALLY just an object with a face put on it," which is usually a dumb sentiment because every one of these are still recognizable if you take their face back off again, some recognizable by silhouette alone.

Stonjourner, though? Yeah...that's...pretty much an object with a face put on it. It has rocks forming "arms" and the positioning of its face turns its lower slabs into oversized legs, but I feel like there was easy room for more stylization. At the very, very least, its facial features could have been more thematic or more integrated into its physical makeup; eyes as pits in the stone and a mouth that's a crack in the rock, for instance, or facial features formed by runes and symbols carved into it. They could've even used the Unown alphabet! What IS distinct about it is that it's kind of personified as a jolly hiker, and I like that its "feet" are still muddy from pulling them up out of the ground I guess.

Unfortunately when I tried sketching an idea for any alternative look it really really came out looking nothing like Pokemon's style. Still, this is a Pokemon that I feel needed SOMETHING more. It even kind of feels like it was intended to evolve or gigantamax into more of the "henge," maybe one that walks around like a caterpillar or something? Eh...that's basically my final feelings on this one. An "eh."