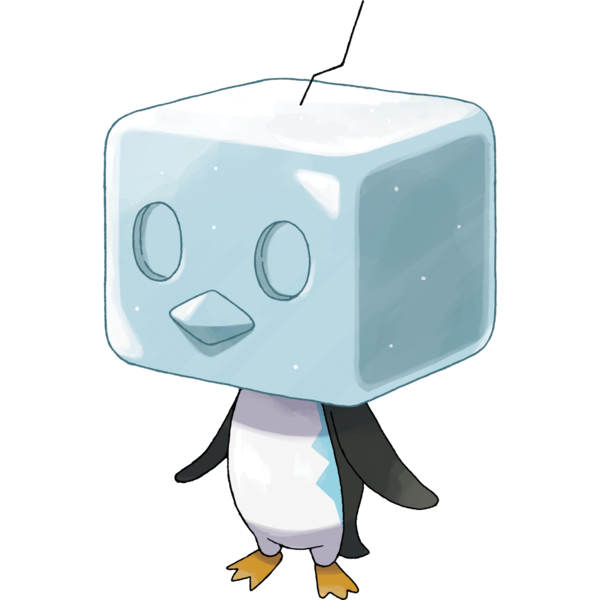 Stonjourner is followed up by another single-stage misfit, a penguin whose head is frozen in a big block of ice. A lot of people seem to actually detest this one, and I feel like maybe the ice head didn't need to be that humongous, but personally I feel it's a unique enough idea that I overall like it. I like how realistic the penguin part of it is and how the ice cube just has shallow pits for eyes.

Eiscue's ability, Ice Face, allows it to sustain a single hit before its ice cube breaks, much like Mimikyu's disguise ability. It strue head is amusingly small with sad, pale facial features I kind of like, though I think its real face should have matched the color of its body. Also, its single hair gets significantly shorter once the cube shatters. A hair which the Pokedex says it sticks into the water to catch fish, and also says connects directly to its brain. Weird!

I hate to use terms as generic and corporate-slangy as "quirky," but that's pretty much what describes Eiscue. It's quirky. It almost feels more like a rare gag villager from Animal Crossing or some goofy Marioverse enemy, and I can kind of understand why people either love it or hate it. Personally I lean more towards liking it, and I respect that it's such a different penguin from the cluttered Empoleon.