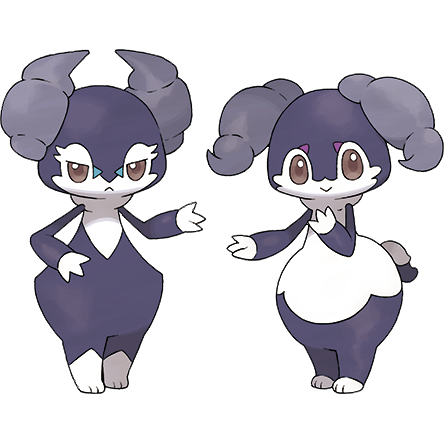 Euhh...what? What are these? When I first saw them I couldn't figure out what they were meant to be besides ambiguous mammal-things with arbitrary gender dimorphism and an equally arbitrary psychic typing.

It took a while to realize that, whatever the heck they're supposed to represent taxonomically, their thematic motif is that of a butler and a maid, accounting for their fur markings. This is why the dimorphism, which extends in a somewhat uninspired fashion to the male having more offense-oriented stats while the female is the inverse. The pokedex also tells us that the females are babysitters (of course) while the males are.............valets?

Who the hell is letting a Pokemon drive their car?

I just don't care for these things. They're just a couple of stereotypes embodied by ambiguous animal-things with very average sort of designs, yet another Pokemon this generation that doesn't feel "finished" yet.

People have asked me to acknowledge a bit more about them since putting this up, like the fact that those are supposed to be sheep-like horns on their heads that act as their psychic antennae, and that they may draw inspiration from "satyrs" and "house elves." While these are interesting ideas, they again don't feel all that evident to me. The horns look more like ears or hair, which was probably intentional but doesn't feel visually pleasant to me.

People began calling these things "satyrs" almost as soon as they were revealed, but I think that's a reach. They have horns and they stand upright, but that's about it; nothing else reads as a goat-human hybrid or aligns with any actual aspect of a satyr. Alluding them to brownies or house elves isn't too bad of a stretch, but I'd buy that more if they were fairy type. It feels more like it could just be a coincidence, that the designers probably were just thinking "little furry British butler critter" like how Audino was a little furry French nurse critter.