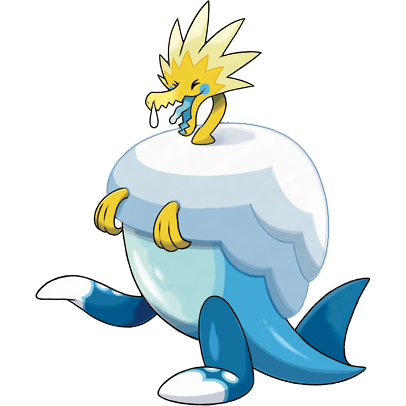 The next astounding discovery by the brilliant and fashionable Professor Liss is an Electric/Ice type, formed from the fossilized bird and the "fossilized dino!" A bad translation, though; in Japan it's explicitly a "plesiosaur fossil," which was not a dinosaur. It's also kind of a shame because I'd have loved a mosasaur or an icthyosaur!. If we're eventually supposed to see the front end of this creature (or encounter it whole) I'm hoping for the latter. No offense to the plesio's, but the bizarre dolphin-like appearance of the icthyosaurs was just so rad!

The Pokedex says this creature's electricity is generated by the constant shivering of its upper half and that it preserved food with its frozen body, but that it has difficulty walking and must have gone extinct because it was too slow. We know of course that the true form of the ice-type "dino" must have been pretty fast and powerful in the water, where it belongs!

This seems to be the least favorite among fans, partially because it never stops shaking and always has a droplet hanging out of its nose to indicate a cold. People really don't like the idea of a Pokemon that might live in constant misery, to the point that I've seen them feel uncomfortable even keeping one. It is just a blob of video game code at the end of the day, but I can't say I've never gotten that invested in video game entities myself. I still have no problem with this one though! I don't even mind the mucus like I did for Cubchoo, since Cubchoo was trying to pass an entire foot of frozen snot off as something cutesy, but here it's just a tiny detail on a weird, comical design to let us know it's sneezy. What if you give it a big fat scarf though?! Didn't anybody think of that???