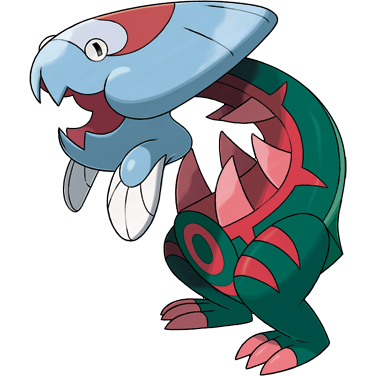 Welp, we've finally hit what I considered, for a while, to be the only new species in this generation that I really liked at all, and still the one I might feel the strongest about. This time it's the water/dragon combination of the fossilized drake and "fossilized fish," which is actually a Dunkleosteus, one of the coolest and most terrifying creatures to ever swim the seas! I really love what they did with the creature's face, those chubby cheeks and jagged beak translate it perfectly to Pokemon's style and the little squidward-like eyeballs are simply lovable! Now the dex is saying that this creature could run at high speeds on land, but could only breathe underwater, even though its other dex entry says its powerful legs and jaws made it an effective apex predator. Silly!

To tell the truth though, it actually wouldn't have mattered to me what kind of fish this Pokemon got its head from. What really matters is the simple placement of that head on its "body" for two reasons: 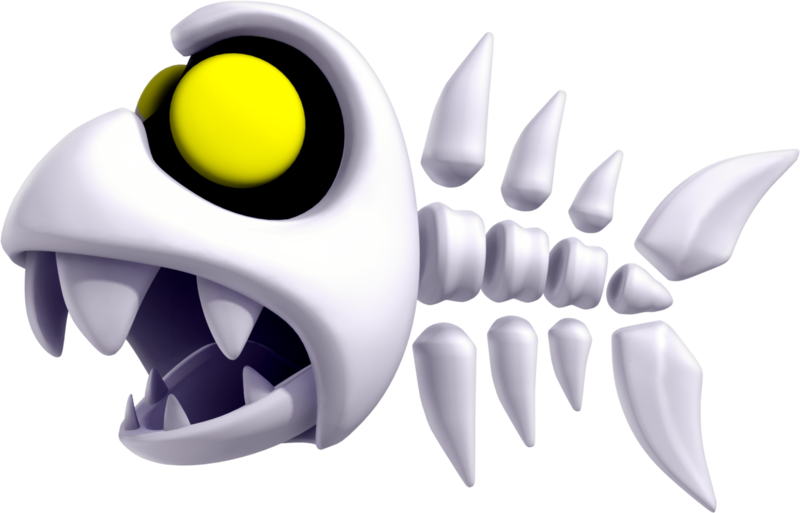 First, I've always wanted there to be a "dead fish" Pokemon. Fish skeletons are just so neat looking that they're almost always my favorite option for fleshless zoological undead. Any fisherman with a pickup truck could tell you that, not to mention such a Pokemon would have always perfectly complemented my use of Garbodor.

I haven't seen anyone really comment on it for some reason, but it struck me at first sight that Dracovish is arranged so the spikes of the drake tail form the "ribs" protruding from the "spine" of one big fishy carcass, a visual gag further enforced by the tail's fleshy pink elements and lopped off end! Gruesome!!! 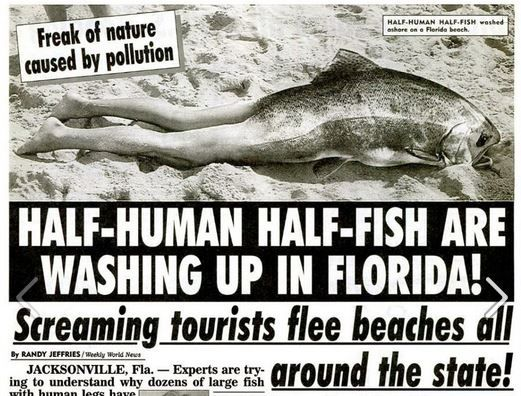 Second, I've also always wanted a "reverse mermaid" Pokemon; a fish with a pair of legs. My first encounter with this fine trope was this "Weekly World" cover story I saw when I was too young to grasp the concept of parody or satire, and as goofy as it looks now, I remember finding that poorly doctored image somehow utterly skin-crawling at the time. I'm pretty sure it gave me some JUICY nightmares about this wretched thing just kind of lying around in my house for no reason, obviously the most terrifying thing it could have been doing. I've been drawn to the concept of legged fish ever since, but especially when they're in the context of something monstrously abnormal, like this "Freak of Nature Caused by Pollution," or Junji Ito's Gyo, or how they appear in Monster Party or its grandma The Gegebomajuu or the one I still don't have from The Trash Bag Bunch.

Just by sticking a sea monster's head on the end of a thagomizer, they've created for me a reverse mermaid "skeleton" that's also canonically a terrifying abomination of irresponsible science. It's everything I wanted! Almost? Well...it's a perfect Pokemon, obviously, completely without flaw, but I think I might just be seeing what I want to see, and does that really count?

Either way it's kind of bittersweet, because one of my personal "fakemon" already combined those dream concepts more literally, and I'm still pretty attached to it, but there's one problem: It may have its own style, but the overall shape feels uncannily similar? Enough so that now I feel like I can never use this design for anything without it being a retroactive rip-off of this Pokemon.

There's also the much more minor, much more personal dilemma for me that Dracovish is an overnight superstar. Its water type "Fishious Rend" move (nice name!) combined with its bite-boosting "Strong Jaw" ability is so obscene as to chomp its way through a max-defense Toxapex in just a couple turns, and that's a Pokemon strong against water moves. Dracovish rocketed pretty much overnight into the top ten most-used Pokemon in the game, and I guess I have to admit, silly as it may be, that it's less fun to me if people assume I'm using a Pokemon for its competitiveness rather than its looks, a problem I already have with Toxapex and Pheromosa. I can't stop thinking of the aesthetic teams I would make with Dracovish, and none of them are even technically possible in this game.

Dracovish is one of the weirdest, coolest, most adorable Pokemon of all time, there's no doubt about that, but it's a Pokemon I give my 6/5 rating with a couple of mixed feelings; really dumb mixed feelings about an anime drawing of a broken fish with the wrong ass.