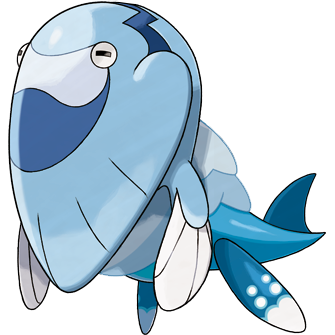 Oh, right, we're still not done these! Poor arctovish; the other use of the Dunkleosteus skull is completely overshadowed by the adorably bipedal and devastatingly lethal Dracovish, with many calling this one the worst and most forgettable of all four monstrosities, even its water/ice typing a rather conventional one when you get down to it.

Arctovish is still a lot of fun, however; since both of its halves now come from predominantly blue, finned or flippered sea life, it very nearly looks like a complete and natural animal, or would have, if our beautiful genius queen of legitimate responsible palaeobiology hadn't put its head on upside down and thought "yes, this is correct, this is what this animal looked like, and also why all of them died." Oh you pillar of academic integrity. Yes, the official word on this "species" is that it went extinct because its mouth was on top of its head and it could neither eat nor breathe correctly. Cara Liss created life from fragments of the dead, its face came out backwards and presumably gasping for air, and she said in her unparalleled wisdom "well sure, these idiots were just like that."

I don't think it was accidental that the markings on top of the fish head come out looking like a face from this angle; that you can interpret the line between its white and dark blue markings as a mouth line, or even the entire dark blue portion as a gaping smile! Its weirdness is just a little subtler than our last three, but that's what makes it just as cool, and it's a great day when you can say the "subtlest" of a set of things is the one with its entire face on backwards.

On a final note about the fossils, how cool is it that all four have a nearly "greyed out" shiny form? Not to keep bringing up my fan ideas, but I did have concepts for "mutant hybrid" sort of Pokemon that, oddly enough, also used greyscale shinies. My reasoning for this was "B-movie monsters," and I can't help wondering if someone had the same thought?