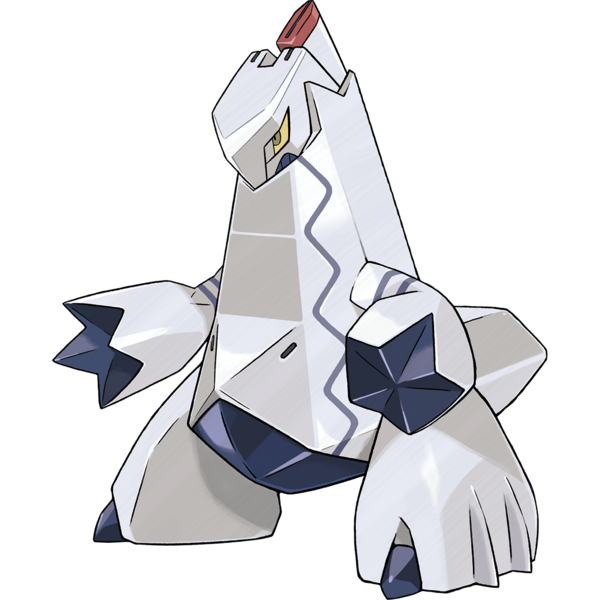 Aww, no more fossil freaks. I wonder if we'll get more of those in the upcoming DLC? We're actually almost near the end of our reviews for now already, this standalone steel/dragon kaiju basically the pseudo-pseudo-legendary of this generation.

Duraludon is shaped a little like Tyranitar and even said to have a rivalry with it, in a clear reference to Mechagodzilla. It's also capable of bending forward to function as one gigantic energy cannon, which is a fun gimmick, and I do think each element of its design looks fairly cool; especially those strange looking arms! The only negative is that it feels difficult to picture this thing walking around very effectively, and that multiple have noted how much it just looks like a giant asthma inhaler.

Duraludon is also our last non-legendary Pokemon to have debuted with a Gigantamax form, which turns it into basically a living skyscraper. The idea of a metal kaiju that IS a building is a cool and very novel one. I'm surprised I haven't seen it done more, with the association between kaiju and cities and how the most traditional kaiju body shape is similarly tall and towering. Neither form here is necessarily better than the other however; Duraludon as-is feels like a refreshing case of a Pokemon that's finally just a "monster" again, but I also like the objectmon that is its Gigantamax. I guess I just think both of them are valid in different ways.

Before we move on though, let me squeeze in here last-minute that Duraludon might have earned a 4.5 or 5 if its body had at least one "seam" indicating it as flexible in any way. I guess having a single stiff piece for a body is the "point" of the design...but it still looks awkward.