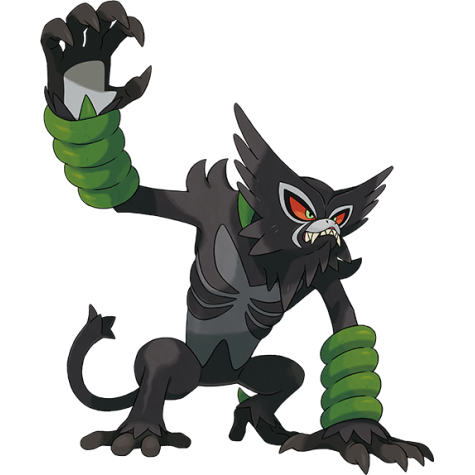 NOT ANOTHER APE!!!!...Is what I would say if this wasn't actually the coolest looking primate Pokemon and an entirely cool looking Pokemon by any standard. I'm pleasantly surprised! This dark/grass type is a terrifyingly clawed, fanged, red-eyed monkey with vibes of baboon and, if you ask me, a bit of lemur. The long, flared fur of its face, pale white rings around its menacing glare and rib-like pattern of its chest are all extremely stylish, and the grass typing factors in as thick, green vines wrapped around its arms; a monkey that generates its OWN vines to swing from! That's actually clever!

It also kind of evokes Spider-Man slinging his webs, and I'm inclined to wonder if they weren't in fact thinking of a play on "spider monkey" here.

What's also interesting about Zarude is that it may be a legendary Pokemon, but for once, the whole point of this legendary is that they hang out together in large numbers; in terrifying, terrifying packs of giant, screaming, vine-slinging carnivorous monkeys. I sincerely like every aspect of this Pokemon, and can think of no major complaints. I even like the fact that this Pokemon ties into a new movie, in which Ash encounters an orphaned human actually taken in and raised by one of these greatly feared beasts, and now you can see just how huge they are. I feel like I'd be more interested in actually seeing this movie if it were allowed to be a side story without Ash and Pikachu shoehorning on in there, but you know how it goes with major brands and their marketing.

Players can actually receive a special "Dada Zarude" with the same little tattered cape as this one, but that feels a little weird doesn't it? How is everyone downloading this specific kid's adoptive monster dad into their Pokemon Storage Box? Is it somehow a duplicate, perhaps? Is it a normal Zarude that was inspired enough to take on the same form? I've never really liked when a widely available Pokemon literally represents a totally unique character. It just feels wrong!

Regardless, this one gets a perfect 5 from me as a concept and design.