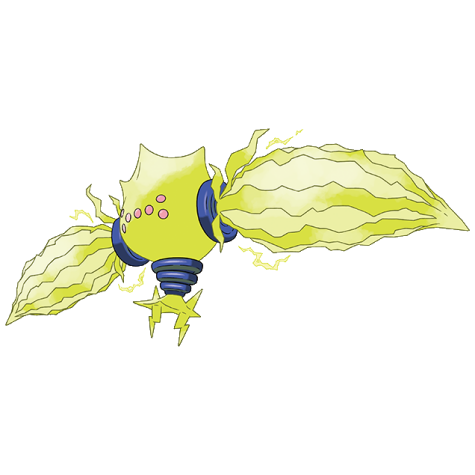 And then, clear out of the blue, we got hit one day with the reveal that there'd be new "Regis!" That's honestly rather pleasing, I have to say; the huge, ancient statue-like monsters were definitely too strange and unique to leave behind for good, and what's fascinating about the new additions (plural! There are two!) is that they aren't restricted to the "solid materials" of their predecessors. That is, the originals were stone, ice and steel, with the final addition of the normal-type Regigigas, but our first newcomer to the family is electric type, said to be nothing but energy generated by a single massive organ! What do they even mean "organ?" Something biological is in there? Is there a living organ inside the other Regis, then??

The design is just awesome, too. It's shaped very much like one big lightbulb, with a very cool pattern of the usual spidery little eyes, then it has cute, tiny lightning-bolt feet and a couple of HUGE, crackling, more flame-shaped energy arms! It also has metallic bands to further emphasize the lightbulb look, but these aren't apparently a natural part of the being; they're restrictive braces someone added to it, and removing them "unleashes its true power," which sounds pretty disastrous.

Overall, a beautiful and entertaining addition to one of the most interesting Pokemon sets...but I do find the name pretty awkward to say, and I can think of many that would roll more comfortably; Regizap, Regibolt, Regilectro, Regispark...it's like they go out of their way to rule out any that are easy, to the point of settling on only the clunkiest options. Are they just avoiding any that fans already hit on for fakemon?