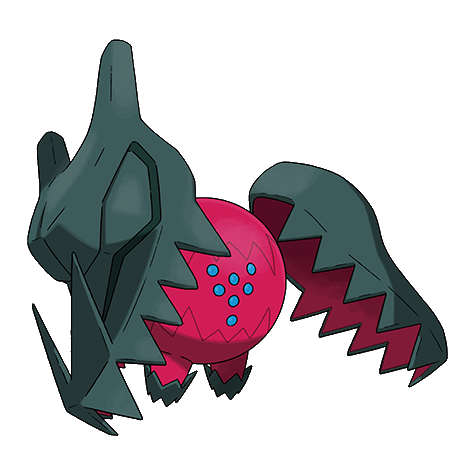 Oh, ouch, it's been a couple weeks since I posted Regieleki...but I actually wrote all of these DLC Pokemon reviews more than a month ago. It says something about my enthusiasm for the franchise that I keep forgetting to put these up daily, and I feel bad for having that fatigue, because I do think this dragon type regi is pretty interesting. This one is said to have been formed by Regigigas out of "dragon energy" it condensed down to a crystallized form, but that it only had enough material to make its head, rumored to also be the animated skull of an actual, long extinct legendary dragon.

So the design we have here is a spherical, purple, kind of scaly-looking regi-body, and the "arms" are the upper and lower jaws of a gigantic, petrified dragon skull vaguely reminiscent of a massive, unknown Charizard variant. It's a bit funny looking, and I feel the design could have flowed a bit better, but as a concept it's pretty inventive and impressively monstrous, the kind of thing you might expect to encounter as a Dark Souls boss. I definitely like it a lot, and adding a dragon type artifact-beast even fits back in with this generation's Medieval European themes. You know what, I thought I didn't like this one as much as Regieleki, but I'm going to give it another 5. It's good.