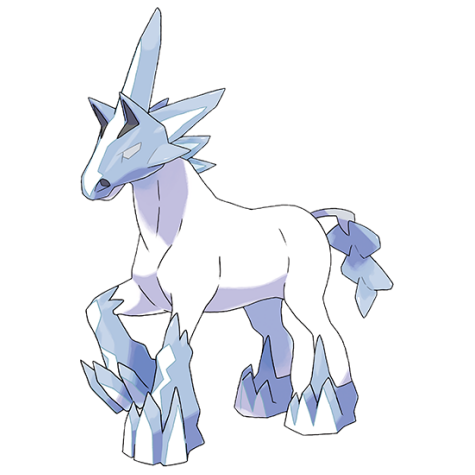 Horses are one of those animals like cats, dogs, bears, monkeys and butterflies that humans love significantly more than most other living things, so it's honestly pretty surprising that there were previously so few in the Pokemon world. I can't say another legendary horse wasn't an inevitability, then, perhaps even obligation on behalf of Pokemon's marketing, and this is just one of two counterparts now available in the DLC. Coupled with the aforementioned Ponyta line, Galar really expands the options for you equestrians.

Glastrier is a pure ice type Pokemon, said to be "belligerent" and menacing, which is cooler than the delicate snowy unicorn I might have expected. The design, however, I'm very uncertain of. Its visual gimmick is the ice encrusting its hooves and head, forming a helmet with a "mane" of sword-like shards. That's certainly cool, and I also like that its pure white eyes are just visible under the translucent eyes, rather than having "eye holes." Except for these accessories, however, it is literally just a white horse, realistic and very plain. While I appreciate such an uncluttered look in a legendary, it still could have been pushed a little farther and more "epic;" making those ice blades strikingly long, for instance, or having the tail continue into a more winding chain of ice crystals. As it stands, it looks more like a mid-game Pokemon. Inoffensive, but not extremely memorable to me.