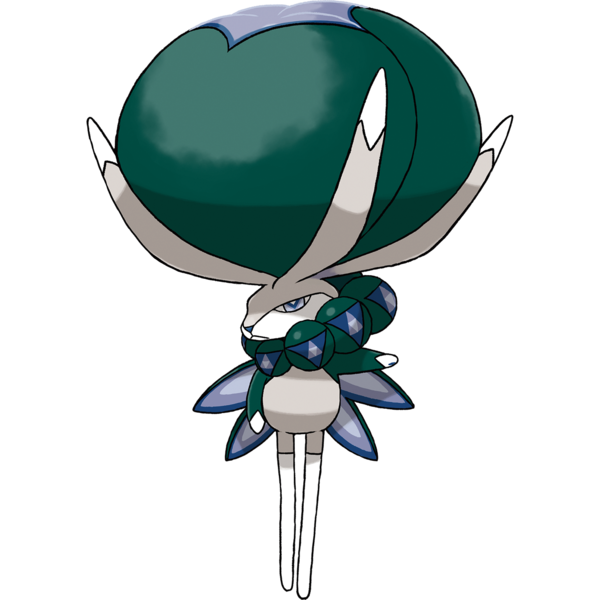 Haha. What!? This is what we're currently ending the whole Pokedex on? This is Galar's "Mewtwo?" Its "Deoxys?" The thing you designed to be the new most awe-inspiring and mighty warrior out of almost a thousand monsters? What am I LOOKING at!? And why do I kind of love it as much as I almost viscerally don't?!

This design is just bizarre, even for a Pokemon. Considered the "High King" Pokemon, it's a psychic/grass rabbit whose four ears cradle a huge, green tomato-looking bulb I guess was meant to look like a flower bud and evoke some sort of giant intellect. On paper, that's a novel concept I could see working many, many possible ways...but they went and gave it this serious expression on a realistically shaped lagomorph head, and then they gave it little nub arms, a small sphere for a body and a couple of perfectly straight, needlessly long poles for legs. It genuinely looks like they took the head from a more lifelike, more dramatic Pokemon and pasted it onto one of the sillier early-game mascot Pokemon. Its elements DO NOT synergize with one another. Nothing about this design feels "right."

But, like I said...I kind of enjoy that? Maybe it's with a bit "irony," maybe I just feel bad for how poorly it was received, I really don't know. I may never know. These are design choices so odd and arbitrary that they have broken my ability to fairly evaluate them. What I do know is that many players seem to wish the body better matched the head, but if I had to do one or the other, I'd rather that the head better match the flatter style of the body, sort of like this: 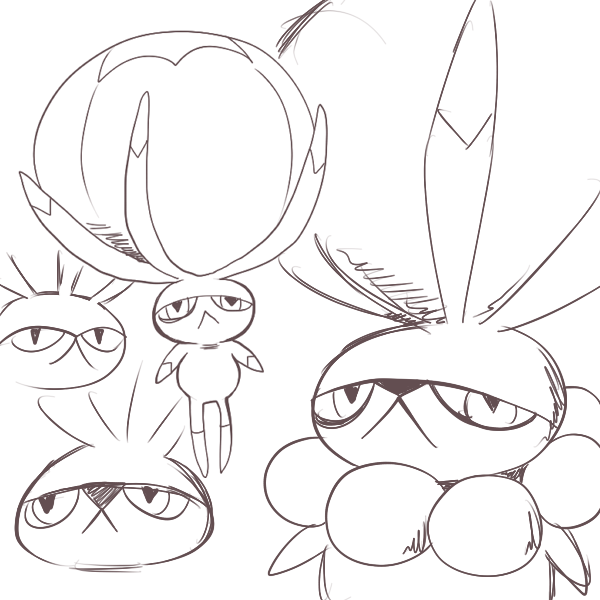 At some point in the DLC "hype period," fans did catch wind (or just assume) that maybe Calyrex has an alternate form; that maybe what we're seeing is the "fallen" Great King, feeble and weak, that the player might get a chance to restore.

As it turns out, Calyrex has two "alternate forms" it achieves by "fusing" into "one" Pokemon with either Glastrier or Spectrier, and those who heard about this before they ever saw it almost immediately thought it would mean Calyrex's body growing into an imposing, elegant ungulate of some kind, like some mighty and noble forest elk. Ha. 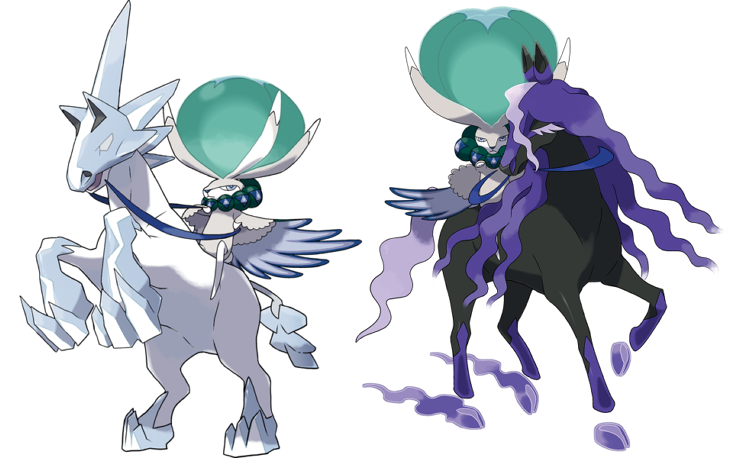 "Ice Rider" and "Ghost Rider" Calyrex, Psychic/Ice and Psychic/Ghost, are of course literally Calyrex riding on the back fo one of the two horses. This is seemingly why the horses look so plain and why Calyrex has those silly long legs, but absolutely nothing about this looks impressive to me. If you happen to love either of the horses and you love Calyrex I'm sure it's awesome to be able to use two of your favorite new Pokemon in one slot, but even then they kind of just detract from each other, don't they?

Calyrex does not stylistically match either of the horses, like, at all. The way Calyrex crams more detail into a smaller outline makes it look more like a different piece of artwork scaled down and pasted onto these cleaner and roomier horse designs. Neither horse shares any common shapes or design cues with the rider. Calyrex's white elements don't even match Glastrier's white elements, and its grey elements don't even match Spectrier's grey elements. These Pokemon were simply never designed to actually look stylistically pleasing together or play off one another in any identifiable fashion. Yes, just plopping one thing onto another thing is "the point" here, but it's a point that still should have warranted some kind of interplay between the visual theory of the three Pokemon involved. The result is a gimmick intended to wow the audience and sell more games, but only looks haphazard; even a Shellder takes on a fun new style when it's sitting on top of a Slowpoke!

I guess we'll meet here again when another batch of new, official Pokemon drop in another one to two years.