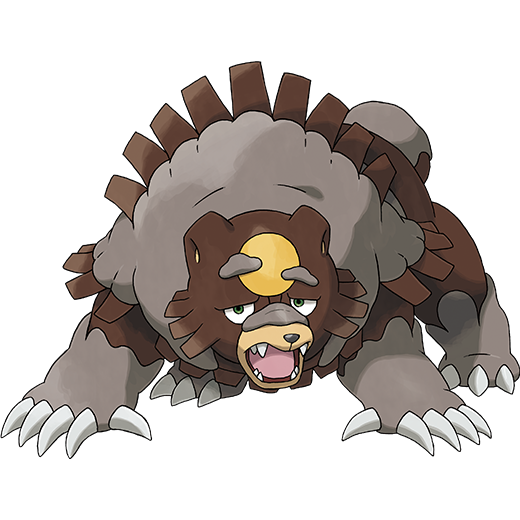 Ursaring, like Stantler, is another second generation woodland critter Pokemon that's received a new evolved form, and it's fairly interesting really. It evolves only when exposed to peat during the full moon, so it's a nocturnal swamp-dwelling bear, and it really looks like it would be. It's much bigger and bulkier than Ursaring, it's quadrupedal, its fur is much darker brown (almost blackish in-game), it has a "full moon" marking on its head now, and it has a gloomier expression. Most notably, it has pale grey mush draped over much of its body and caking its paws, which can be mistaken for fur in the official artwork, but looks a lot wetter and goopier in-game, because it's seemingly just peat!

I've already seen players remark that they never even heard of peat until this game, and as far I know it doesn't really explain to the player what peat is, but peat is usually made of decayed, fermented moss, especially sphagnum moss, and the presence of peat is part of what defines a wetland as a "bog." Peat is highly resistant to decay and acidifies the surrounding water, keeping microbial activity and nutrient levels fairly low. This is both why bogs can preserve dead bodies as mummies for many centuries, and why bogs repeatedly trigger the evolution of carnivorous plants; you can only really find venus fly traps, North American pitcher plants and various sundews in a peat bog!

What all this has to do with the bear pokemon, I'm not totally sure, but this ground/normal type can apparently control peat to defend itself. It's cute that some little wads of peat also look like disheveled "eyebrows" on its forehead, but also like clouds passing over the full moon marking.

Its best quality, in my opinion, is how "unpleasant" it looks in a certain charming way it shares with its real-world counterparts. It's a nasty heap of a beast that looks perpetually bored and grumpy, which feels more "right" for a bear than most other fictional bears and certainly any other Ursine Pokemon thus far. I feel like there's gotta be a fair number of people who really like bears and were waiting for a Pokemon to capture this specific feeling. The feeling of a big, dirty grizzly lumbering out of the woods and going "hhOOUuuUGGHHH" out of its horrible flapping lips before it knocks your head off and only eats some of you before it's too tired. That's this Pokemon.