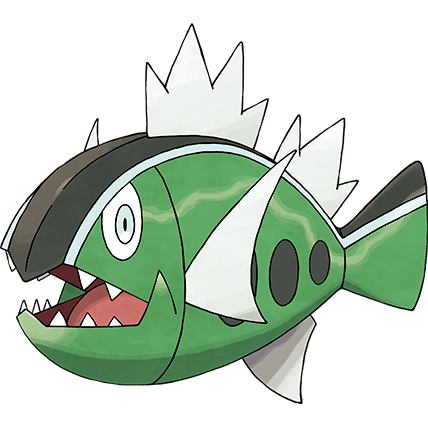 Some of the new species we're looking at evolve from new forms, too, so we're still not done looking at "Hisuian" versions of existing Pokemon, either! You may recall that Basculin came in two different colors with slightly different facial expressions, but was otherwise just a single stage fish Pokemon with no other noteworthy gimmicks, and sadly had very few dedicated fans over the years. The Hisui region introduces a third color morph, the white-striped, which has rounder, more fearful-looking eyes. Whereas other Basculin are said to be viciously territorial, Hisui's white-striped variety is known to be calm and gentle. 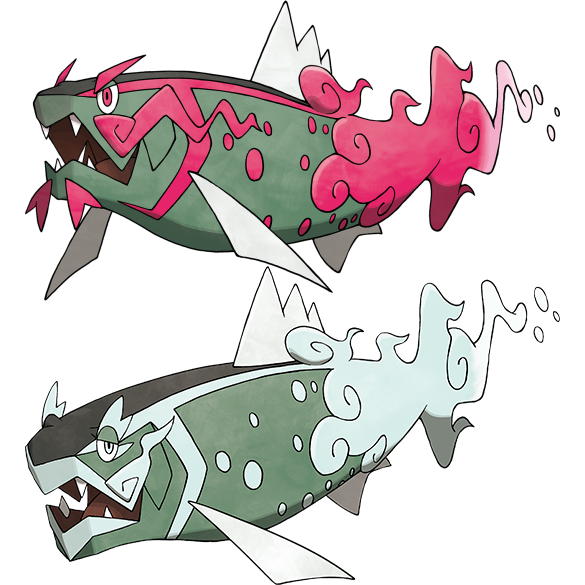 If a Hisuian Basculin has lost at least 294 HP from the recoil damage of moves like Double Edge, it evolves into a rather surprising water/ghost Pokemon, Basculegion. More elongated and angular, it looks a little more like a salmon, it has jagged "whiskers" and it has what resembles curly, supernatural flames in place of a tail. It also varies in design depending on its gender; females retain the white markings, while the males gain red accents and a more aggressive expession.

The concept behind this evolution is that it's the last survivor of a migratory school, and possessed by the souls of its fellow Basculin who give it enough power to keep going. That's a pretty fun and interesting idea, though it's not really communicated by the design. Putting some fish-like shapes in the "flames" would have gone a long way, even if it might have felt a little like a repeat of Wishiwashi's schooling form.

I'm also not sure how I feel about the fact that the flames are actually rigid. They look like they'd be ectoplasmic vapor, but in the 3-d model these curly wisps are hard and unmoving, even though in both the artwork and the model there are little flakes constantly breaking off from the end of the "flame." I guess I actually kinda like this decision, because it would be obvious to just make them ghostly. The whole Pokemon is seemingly meant to look like an ornately carved wooden ship, and I kinda feel it has the kind of angular design we associate more with the first generation, with Pokemon like Magikarp.