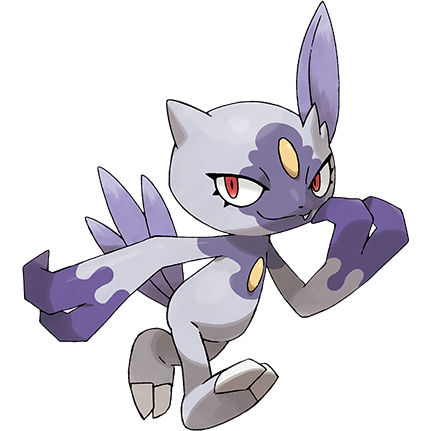 Based on the Kamaitachi or "sickle weasel" Yokai, the original Sneasel is a dark and ice type, but in the Hisui region, it's a fighting/poison type, taking on a pale grey coloration with blotchy, purple stains on its face and talons to communicate the "poisonousness" fairly well. Despite the fact that it now "drips poison," it's said to be less spiteful than the dark-type Sneasel. I'm not really sure why they changed both of its typings, however; dark/poison or ice/poison would have both been appropriate, and ice/poison would have been a novel new combo as well. 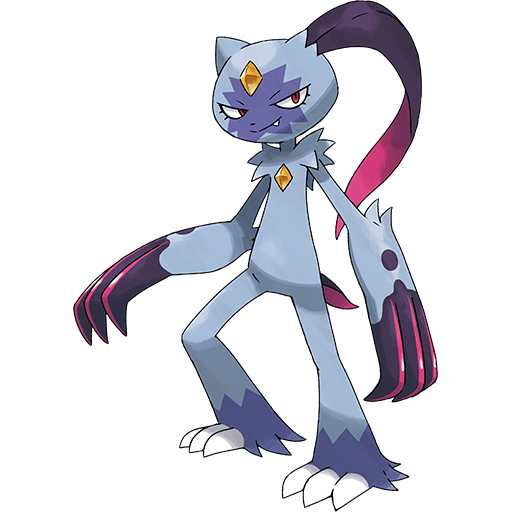 Instead of a Hisuian Weavile, the toxic weasel evolves into Sneasler, a taller and lankier design with nastier looking sickle claws and a more elongated left ear. It's an interesting change of pace for the poison type, actually the first one in Pokemon history to be a furred mammal, if you don't count the kind of furry-looking, kind of mammal-adjacent design of Gengar, maybe. It's also nice that Sneasel fans get a new option, but by being an alternative evolution rather than a further one, it doesn't render Weavile obsolete. I can see a lot of people preferring this one if they happened to love Sneasel's personality, since it sticks closer to it, but if you like them both, their typings are different enough that you could use Sneasler and Weavile on the same hypothetical team without too much overlap. Not bad!