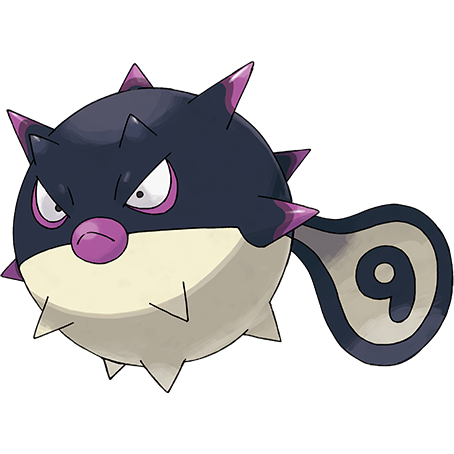 Wow, Qwilfish! I always felt this poor little puffer was one of the most neglected and forgotten of all Pokemon, so of all the Hisuian forms and evolutions we've looked at, it probably deserved something new more than any other. Now dark/poison rather than water/poison, it's black where Qwilfish is usually grey-blue, its lips are more intensely purple, its upper spines are stained with purple poison and it even has purple bags under its eyes. It's said to be hated by local fishermen because it sprays poison everywhere when caught, presumably spoiling the rest of the catch and surrounding water.

Hisuian Qwilfish learns the new signature move, Barb Barrage, and if it's used the move at least 20 times in "strong style" - a new battle mechanic for Legends - it can evolve further: 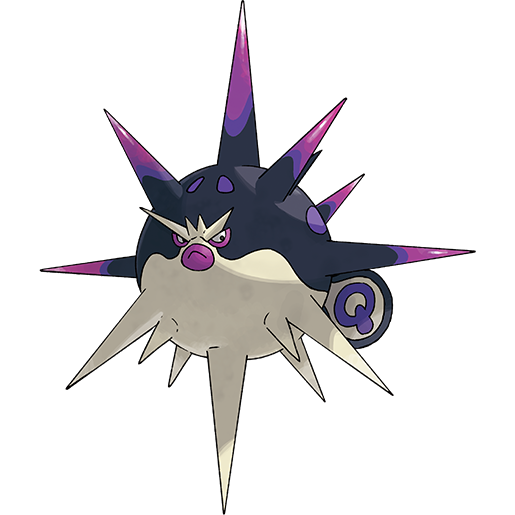 So Qwilfish fans have waited over twenty years for it to evolve into something, but I have no idea if they generally like Overqwil or not. The name is great, and the fact that it's mostly just a much bigger Qwilfish isn't bad I guess; it basically preserves almost every element of its predecessor, but its spikes a whole lot longer, it has a "Q" mark on its tail, and it has additional spines above its eyes. I guess it's adequate for what it is, but I don't know...it feels a little too straightforward, maybe, and I don't personally like how much smaller its eyes are compared to its lips. I think its eye and mouth proportions should have just stayed relatively the same even as the body grew bigger, and then it would have hung on to some of the grouchy "cuteness" of Qwilfish. I guess the simplicity of it feels kind of authentic, I could certainly see this as an actual Gen II design, but I think I really have to hear from dedicated Qwilfish fans on this one. People who've most passionately hoped for an evolution will always be the ultimate authority on whether that evolution was worth the wait.