LOST GEN I POKEMON:
HOLY CRAP IT WAS TRUE 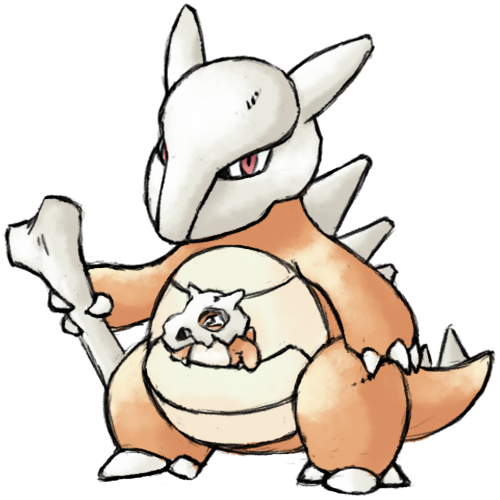 Are you kidding me?! For real?! Really?! All this time, the fan theory that Cubone is just an orphaned Kangaskhan was spot-on?!!?

All we know of this one is the back sprite, but it's pretty obviously a more evolved Marowak with what does indeed appear to be a child it's carrying. Whether or not that child has a skull head of its own is difficult to tell, but if it does, that would imply that the baby is a fellow orphan adopted by this fully grown Marowak!

There's still a chance that this wasn't really meant to be tied in with Kangaskhan at all, admittedly; they may have just really liked Kanga's child-carrying gimmick, and thought they would reuse it for at least one other pokemon. On the other hand, fans certainly noticed similarities between baby Kanga and Cubone since the series was brand new, so it seems unlikely that this is all pure coincidence.

In any case, the concept of an orphaned Kangaskhan becoming a Cubone and growing up to adopt another Cubone is positively heart-wrenching. She spotted another of her own kind, all alone, wearing the skull of its dead mother...just like her own tragic childhood! Perhaps the skull-wearing habit was just an adaptation all along to protect a homeless 'khan until the off chance that it found a battle-worn new skullmama.