What a cool reason to return to these reviews! In case you're the one Pokemon fan who somehow missed it, the dataminers over at The Cutting Room Floor recently dropped an unprecedented bombshell on the fandom with their acquisition of a beta Gold and Silver, originally playable only at a special 1997 event in Japan a full two years before the release of the second generation games.

Hidden in the data of this rare treasure? Dozens of never-before-seen Pokemon designs. Some would become Pokemon we know and love today, while others weren't so lucky, and it's no wonder Gamefreak tends to keep their beta content under such a seemingly tight lock and key. Now that we've seen some of the monsters we could have had, it's likely that they'll never hear the end of it. 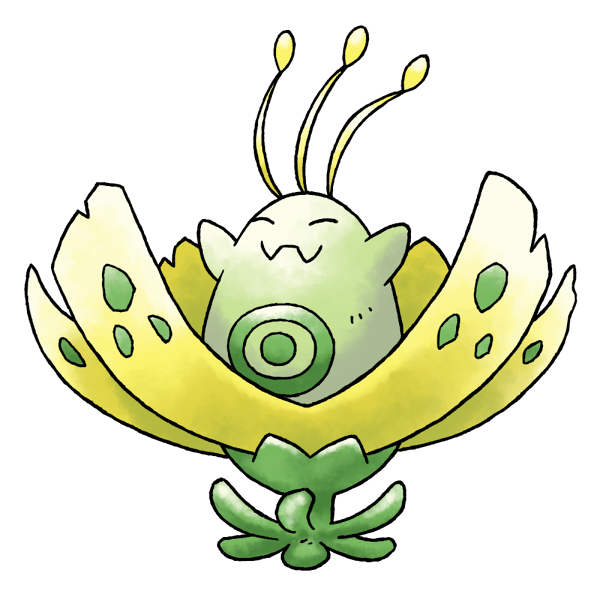 Our very first example is "Hanamogura" here, and again, thank Rachel Briggs for providing sprite-accurate artwork as close as hypothetically possible to the Sugimori art we could have gotten.

The name of this pokemon roughly translates to "flower mole," and in the beta game, it was the middle evolution between Chikorita and Meganium. Yes, instead of Bayleef, we very nearly got this bizarre little blob critter emerging from a flower-like pod! Who knows what on Earth they were thinking here. Chikorita would have to both plant itself in the ground and become seemingly much smaller to take on this transitional form. Could it be that Chikorita and Meganium were significantly different as well, before even this beta version?

One by one, we're going to check out each and every beta design that differs in any significant enough way from whatever came to replace it, and if you haven't yet spoiled yourself on these, you can prepare yourself for a lot of heartbreak to come.