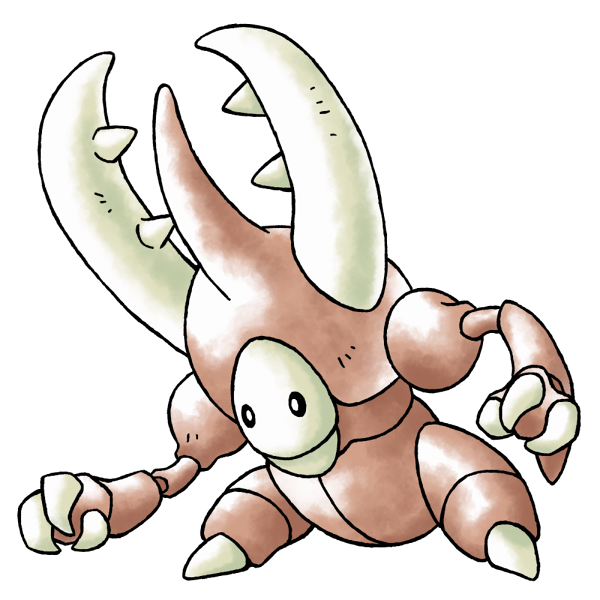 DUUUUUDE! I have yelled so much in these reviews! This thing is COOL! We all wondered where a Pinsir evolution was hiding back when Scyther evolved into Scizor, and most assumed that's what we were seeing when they revealed Heracross, but in the end, it turned out Heracross and Pinsir were unrelated rivals. I knew something was up! It turns out Pinsir really was meant to evolve into a different kind of beetle, and Heracross came along to replace poor Plux.

I still like Heracross well enough and LOVE the beastliness of Pinsir, but this design with the pale little mask-like face is so fascinating in its own right! It's such a unique aesthetic among bug types or even among pokemon in general, and something I can't help associate first and foremost with some of the angels from Evangelion, even if that's not the first place I ever saw a big monster with a little, white mask. It really emphasizes what a Hercules beetle is actually like; their horns are pretty fearsome, but their true face is tiny, tucked away and harmless.

Thing is, Plux looks different enough from our other beetles that I really don't think it's well suited as an evolution, but would work a lot better as a third line, with perhaps a unique typing among them. Bug, Fighting and Dark have a relationship of sorts, so I could see this as a great Bug/Dark pokemon, its unreadable face hiding a cold ruthlessness; the creepy-silent sort of fighter that just stares while it pummels you to dust. We fiddled with the color of Scizors yesterday, so let's see how Plux would look in black: