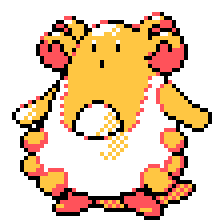 The idea of an evolution for Chansey began with the much more bizarre Happi, but it apparently didn't morph into Blissey directly. Instead, it took a temporary detour into this somewhat slimmer creature, holding its egg in an entire "apron"-like pouch. I think it's also noteworthy that this stage still evokes the axolotl I came to see in Chansey's design; not only do the "ears" still resembling frilly gills, but it has even more of a tail on it. I guess I kind of like it, overall, though there's something a bit off-putting about those fleshy nodules on its sides. I'm not usually one to knock a creature design with a few good nodules, even obvious cysts, blisters, boils or warts, but sickly skin growths don't quite suit this Pokemon line, and the way those things protrude through the white skin of the "apron" is distressingly most evocative of, well, a bunch of hernias. I don't like that. Now I'm kind of clenching my stomach in just thinking about it. At least it's consistent with the brains oozing out of Happi? WAS all this, in fact, supposed to kind of look like the "egg" was "breaking?!"