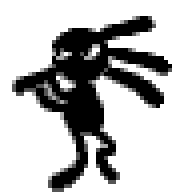 Okay, sory you can't make this out too well on my dark layout, but the earliest Gen II sprites bizarrely include an almost pitch-black silhouette clearly modeled after the modern interpretations of one famous Kokopelli rock drawing. In Hopi spirituality, Kokopelli was a trickster god associated with agriculture, fertility and music, even delivering unborn children to new mothers with a basket or sack he carried on his back.

I probably don't need to tell you why this would have been a somewhat to extremely controversial Pokemon. The Hopi were very nearly driven to total annihilation, and today cling to existence on a strikingly small patch of reserved land. A video game company using one of their actual gods as a money-making mascot would not have gone over well with some parts, so I think we all dodged a bullet here, but they didn't entirely just scrap this idea 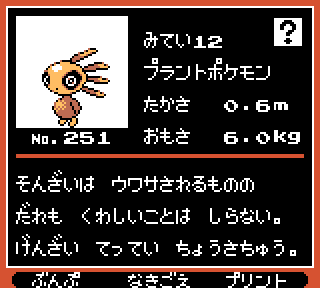 No, Kokopelli was originally going to be the final legendary of Gold and Silver, but eventually mutated into a funny little forest-critter who retained only the head crest, and any Pokemon fan should immediately recognize the beginnings of Celebi. In a transformation more extreme than Shuckle, something referencing the real world became another entirely original creature, and one of the cooler "Mews" at that!