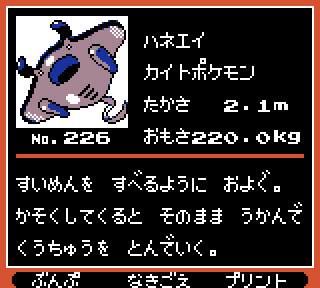 The new leak confirms that Mantine replaced Haneei in the game's coding, which is a shame, because that angel-devil themed ray is still a cool concept and design. Mantine is cute, of course, but it's such a plain and straightforward manta ray, isn't it?

Proto-Mantine, on the other hand, at least had a little more personality of its own, and emphasized a cartoon "airplane" sort of design with two remora-like torpedoes. Or torpedo-like remoras. Or...just organic torpedoes? They don't seem to have very obvious faces on them. 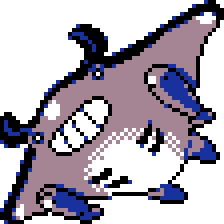 The design has even more character in another scrapped incarnation. Mantas don't have teeth, but this big goofy grin looks pretty fun on a dive-bombing manta monster, and I even really love the lack of a tail here; just a couple little paddly fin-feet instead!

It feels like both this design and Octillery were reworked specifically to be less evocative of war weapons. I never really put it together at all that the Remoraid attached to Mantine was like a fighter jet's weaponry, and now I'm inclined to wonder if there was any point at which this Mantine was in fact the early Remoraid evolution, or even if it formed a split evolution with the tanklike Octillery? Perhaps the two Pokemon were simply intended as counterparts or rivals, since they were also pretty close together in the Pokedex.