So, we just spent more than a month and a half going over every one of these (hit up the Archive if you're coming here from another website!) and it's time to take a look back at them as a whole.

Everyone knows that for everything we see in a final piece of media, there had to be any number of prototypical, rejected concepts, and we often get an eyefull of them in art books, artist blogs, creator interviews and more. Gamefreak, however, has always kept a pretty tight lid on unreleased or unused Pokemon, and it's easy to understand why. New pokemon are an event, and they are permanent. While other franchises will discard and redesign their characters as they see fit, every single new wave of Pokemon games is expected to make every single Pokemon available to players in some way, and every single Pokemon is expected to retain more or less the exact same base design through the journey.

The internet is already abuzz with demands that some of these beta pokemon see eventual release. Everybody has a favorite. Everybody wants to know what the hell some damn fool was thinking when they let some of these designs slip through the cracks. 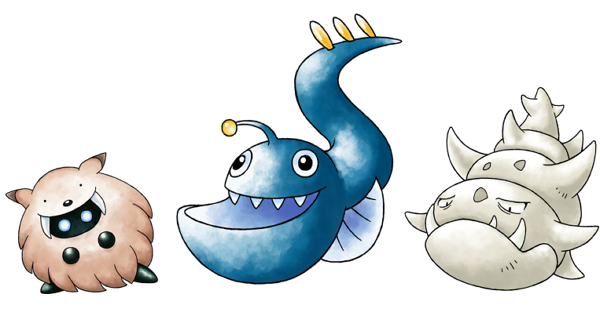 ...But what we're seeing on this page is no doubt barely a taste of the other pokemon still languishing in Gamefreak's archives. Can you even imagine the ongoing chaos and heartbreak if we could see more of them?! I finally understand what all that Cthulhu stuff really means about maddening, forbidden knowledge, not meant for the human soul. I almost don't WANT to know how many more potential favorite pokemon I might never get to level up in an actual, officially licensed game.

On the other hand, many of these early concepts definitely have an "incomplete" feel, while others, however polished, were still benched for a reason or reasons known at least to the staff at the time. Some mistakes are inevitable and some ideas may have been killed undeservingly, but every single Pokemon we ever get to see is the end result of a process. No matter how much you may like or dislike a given pocket monster, there was at some point a debate between multiple people over its inclusion and a reason for their final decision. I may disagree vehemently with some of their conclusions, and I think we all have an inherent right to vocalize our critique of any product we're consuming, but for everything they've ever done that wasn't personally to my taste, they've done around a dozen and a half things that totally, totally were.

If anything, I'm all the more appreciative of the fact that of all the concepts they must have piled up over the years, they still chose to keep such Pokemon as a garbage bag or a mossy anchor.

I think the saddest thing here is that I don't like any of the final Johto pokemon as much as I like these six betas. Sorry, Forretress and Shuckle. The second generation has always been my least favorite, but what they scrapped here could have placed it on par with the first.

It's hard to bias this away from my personal favorites, but if you gave me the power to "rescue" only six of these pokemon, this is what I'd pick out. For you guys and me. THE MOST SUPERIOR TO THEIR FINAL DESIGNS:

THE MOST INFERIOR TO THEIR FINAL DESIGNS:

None of these are even "bad!" I just found them less exciting!

PLEASE REMEMBER TO THANK THE CUTTING ROOM FLOOR for having released these forgotten phantasms to the world for the first time, and especially Rachel Briggs for every single illustration we've used to review them!