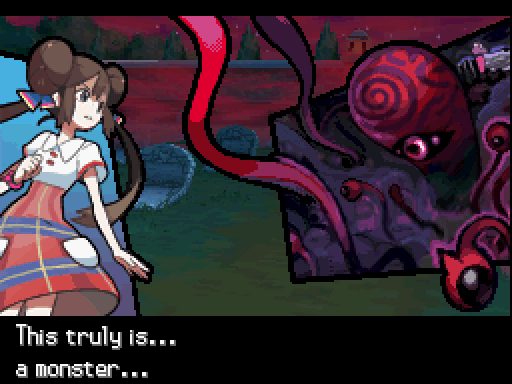 So we've completed the Pokemon: Black and White pokedex, but for the first time, we're still not technically done reviewing "monsters" from this generation. I should be excited for that, but Black and White's Pokestar Studios is an idea as infuriating as it is imaginative. As you may recall, the "Unova Region" is basically supposed to be America, so of course it would include a reference to Hollywood.

"Pokestar Studios" is basically a series of special pokemon battles the player can participate in as part of an in-universe film production, following a "script" with unusual rules and requirements. One scene might demand you harm only one of several enemies. Another might require you to use a certain type of move at a certain time.

Along the way, of course, you'll fight a variety of characters and creatures completely unique to this feature, and that's where the "infuriating" part comes in...as we'll see.

So, these animateed gateways are opponents in the "Mystery Doors of the Magical Land" film series, the black door strangely counting as a grass type and the white door as a fire type.

The faces in the doors are nothing to write home about, but would you look at those snakes? What I wouldn't give for these goofy, snaggle-toothed serpents as actual pokemon. I love, love, anything with those elongated eyes extending way past their actual head, and I know we at least got something like that with Krookodile, but why can't I have a Krookodile fighting alongside these purple goofs!? Dark/Poison, please.

I don't particularly demand the entire spooky door as a pokemon, but those snakes on their own could have been a five.

So now you get why Pokestar Studios is a little heartbreaking, and yes, even this is an example. You may recognize "Kadath" and "Arkham" as terms from H.P. Lovecraft. Celaeno, meanwhile, is Greek for "Dark One." These characters appear in the "Ghost Eraser" movie series, apparently the Pokemon world's equivalent to Ghostbusters. These characters only function as trainers, but how cool would it be if a shadowy ghost-type pokemon had a sort of illusionary, fully human looking body? I would absolutely put a pasty janitor with a creepy shadow on my pokemon team.

This is another in the "Ghost Eraser" series, and another functioning as a "trainer," since this ancient relic houses an ancient, sealed evil it will send into battle. I really like its four-legged, blocky arrangement, exposed "ribs" and its four off-kilter eyes; it really looks not so much like it represents a monster or a deity, but like it might represent the extinct, nonhuman race (or pokemon?) who carved it. It doesn't get a type, but it's obvious it would be our first-ever Rock/Ghost.

Yep, I would give this one another five if I could stuff it into a pokeball.

The big boss of Ghost Eraser, the evil entity sealed in the old statue, is a dark/ghost resembling a big, burly green smog-man encrusted with broken scrap. I do like the pipe-nose and overall idea, but I actually still like the statue it came out of a lot more.

I don't feel AS let down that this one isn't a pokemon, but it's still neat. I'd still accept it.

Another Pokestar movie franchise is the "giant woman" series, hearkening back to the real-world's "Attack of the 50-Foot Woman" and similar sci-fi pulp stories. There's nothing really to her design-wise, and obviously this wouldn't work as a pocket monster, but I appreciate the B-movie homage here.

This sci-fi space invasion features an alien mothership interestingly modeled after Cascoon, and a race of aliens resembling metallic women with beehive hairdos. If you've read a lot of my website and seen a lot of my artwork, you probably don't expect me to care for this as an alien design, but you would be wrong. Beehive hairdos are awesome, for one, and for another, I've always loved the largely forgotten "menacing space vixen" category of extraterrestrial. This is, in fact, one of my very favorite Pokestar designs.

Maybe they're really TOO humanoid to be pokemon, but if they were, they'd probably be to me as Gardevoir is to so many other nerd-o's.

Here's the point at which this Pokestar is just getting cruel. Look at these magnificently terrifying fiends we can never, ever carry around in a pokeball or pet on the tummy or feed Pokebeans to. Both are from a horror film series entitled Red Fog of Terror, in which mysterious entities arrive from another dimension, accompanied by a red mist.

With an eye in its belly and no other facial features, the "humanoid" comes across as something attempting to imitate our species, while the more abstract, monolithic "monster," with its surrounding eye stalks, looks more like a garden of abstracted plant life. I guess the stalks might actually grow INTO the humanoids, and then each humanoid eventually becomes a new "monster?"

It's never explained, though the humanoids are only normal type, and the monster form is dark type. Perhaps the humanoids even represent "infested" humans?

NOT ONLY do I wish these were real pokemon, but I wish this was a real horror movie.

Maybe you thought those interdimensional horrors would be my #1 favorite, but it's this little guy who just about kills me. The gangly, nightmarishly "malfunctioning" form of this steel/normal robot would be straight up there with Garbodor on my favorites list if it were an actual pocket monster, and what a great, thematic counterpart it would make to that very trash heap, to boot.

Honestly, that maniacal, glitching red face pulsing in and out from the head like some deranged accordian is one of THE COOLEST visuals I've seen in this whole franchise, and a cute, happy little robot evolving simply by breaking down would have been just an amazing concept. How can they dangle a design this good in front of us and it not even be a pokemon?! There are a couple of other Pokestar entities, like a giant, robotic Tyranitar, an inanimate time machine you can battle against and some costumed supervillains, but this is it as far as "creature designs" go, an interestingly rare glimpse into not only some non-pokemon monsters, but what people in a world of Pokemon would still consider interesting "fantasy characters." Oddly, not much more fantastical than the dragons, ghosts and giant insects they already share their world with...but that's kind of true for our own world too, isn't it? We've obsessed over sasquatch while gorillas and orangutans already exist, and can even learn to chat with us. We romanticize sea serpents when giant, nightmare squid are both more real and more outrageous. I'm sure even if I lived in the Pokemon world myself, I'd probably still be a big nerd for fictional monster designs.

We've officially reached the end of the fifth generation; our next page is the Gen 5 wrap-up, and then it's on to the 3-d games!