Welcome to bogleech.com Creature Review REQUESTS! Absolutely all reader suggestions have always been considered for free and always will be, but as a special bonus thanks to PATREON SUPPORTERS, the upper tiers can now MAKE me analyze the cool and interesting points of any single creature design or concept that they want and guarantee it goes up so long as it is work-safe, socially acceptable, and within fair use!

This means I'll review things I never normally would, things I never got to in my massive backlog of possibilities, things I wouldn't even normally review at all, and even things the requester came up with themselves! Yes, I will analyze your original characters here, if that's what you want!

The very first, however, is pretty typical of what we do here on bogleech, and that's not at all a bad thing!

The Queen Bee
(Jimmy and the Pulsating Mass) 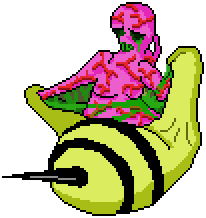 Jimmy and the Pulsating Mass is one of those games with so many elements that appeal to me so on-the-nose, it strangely makes it harder for me to get into. It's a weird mix of feeling like I've seen everything in it, feeling kind of wistful and sad that I didn't actually ever make anything like it, and not really wanting to see all of it because then it would be over, and then what would I even do with the rest of my life?!

What I'm saying is that if you like any of the kinds of things I draw or talk about, you will probably love this game to pieces. It's full of talking bugs and weird plants and wacky characters in a cute, colorful world with a dark, horrific underbelly, which is on FULL display in today's monster.

The Queen Bee is in fact one of the very first "nightmare" bosses in the game, meaning that she would have had a cuter, more wholesome form if she hadn't been corrupted by the titular Pulsating Mass. She's the queen of the anthropomorphic "buddy bees," who look like your typical muppety cartoon interpretation of an insect until they, too, are corrupted into dripping ghouls. 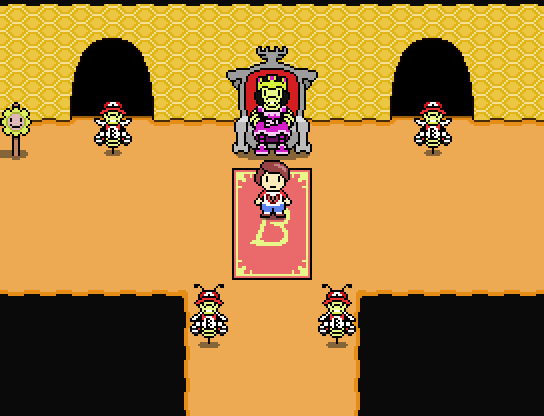 I don't believe the Queen Bee's uncorrupted design is really known, besides this tiny overworld sprite. It's interesting that while the other bees are only corrupted into more zombie-like versions of themselves, the queen has an entirely new, entirely different, human-like body erupting from what's left of her abdomen. A veiny, slimy ghoul that looks almost like its transformation is premature or was just interrupted, though it goes without saying that none of the Pulsating Mass's creations look a whole lot healthier or more complete.

This is the first time in the game that you're really confronted by something terribly, terrible wrong with your happy little fantasy land, so it's a pretty jarring shift you're only really prepped for by a few subtle hints. That, and the title of the whole game, obviously, which already tells you you're in for something morbid, though its easy to forget when you're so many hours into a setting with talking clouds and frogs in top hats.