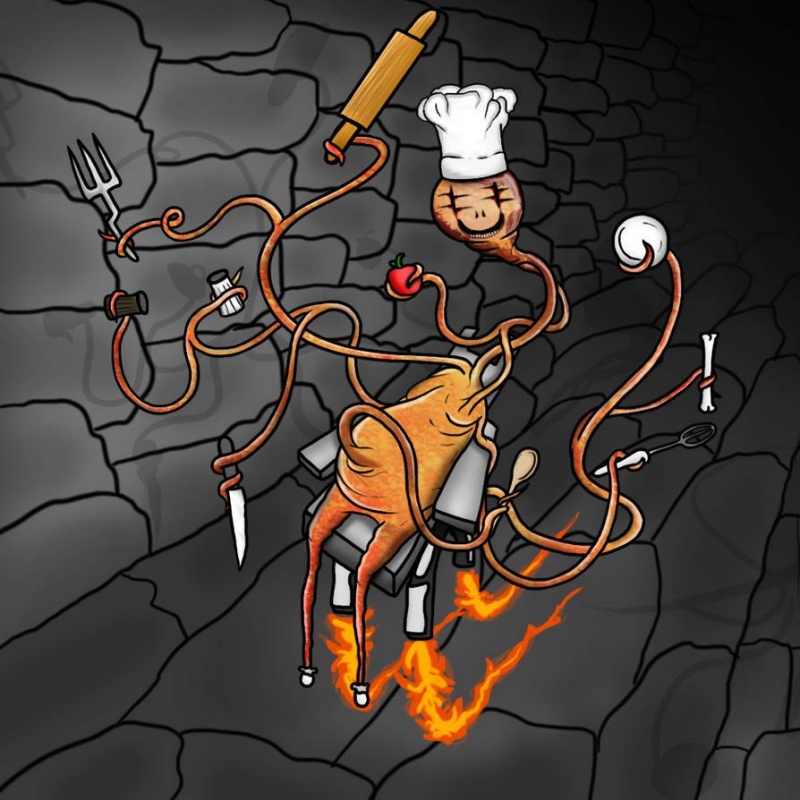 Yes, we're also accepting patron-created monsters here! You can read about this one in further detail here, but to summarize, the Helksis is a single, unique dungeon-dwelling monster obsessed with cooking. The flaming hover chair is a really funny idea for this guy, and how much its body looks like a roasted turkey corpse. Helksis cooked up his own feet at some point and allowed his legs to atrophy, but that's fine, because he has all those nicely branching, vein-like flesh tentacles to wield his implements. Circular heads on long necks are always strangely unsettling, and those scar-like eyes have a really unique shape I actually haven't seen in a character's eyes before.

The idea of a chef as a dungeon boss is a really fun one, with a lot of story potential to it; a lot of possible "adventure hooks." He can turn almost any organic material into dishes so amazing that he has his own dedicated cult and innumerable other bad guys willing to protect and serve him in exchange for a taste of his cuisine, which of course also qualifies as the "treasure" a band of adventurers might seek from his domain. Again, great adventure hooks! I don't see a lot of culinary themes in RPG foes, or a lot of culinary themes in monsters overall, for that matter. At least not as many as I think there should logically be, given how important food is and all.