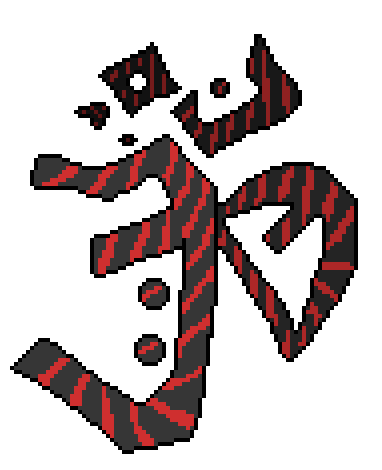 It's another Jimmy boss! And it's the best kind of RPG boss, too: the optional, unexplained and totally surreal kind! The Imaginary Numbers are an abstract concept encountered in the "asymmetrical cavern," a dungeon populated by nonsensical objects and equally nonsensical monsters consisting mostly of nondescript shapes.

The Imaginary Numbers are a frustrating boss. Every turn it has a 30% chance to dodge physical attacks, a 30% chance to reflect all magic attacks, and a 30% chance to counter all physical damage. It also has six "phases" it goes through, each with a number of different attacks, until it reaches the sixth and deals 400% damage to every character, repeating this each turn from then on. Fortunately, it also has a chance every turn to damage itself, which will reset its phases back to one.

The Imaginary Numbers really look like you would expect, a bunch of unknown and even crooked numerical-looking symbols, and it really suits a monster that functions in such an alien way!