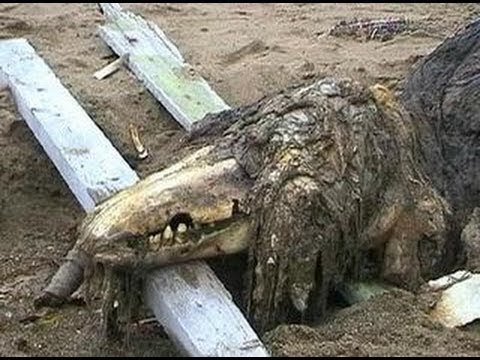 We're getting some of the most popular "classic" SCP's out of the way first, and I think three to five of those should be a good number before we dive into some more obscure entries. For now, let's look at the beloved 682, a gigantic lizard that seems to be unkillable, regenerating SO quickly that it can only be safely contained in a permanent acid bath. It sounds excessive and more than a little cruel, especially because the monster is intelligent enough that it can talk...but there isn't much else that can be done with it, since it vehemently despises all other living things, finds humans in particular to be "disgusting" and will go on an endless rampage of murder the moment it's ever given a chance.

682 is so fast, so powerful and so difficult to contain that it's the very first "Keter class" SCP we're reviewing. Our last two were only "Euclid" class, meaning that they're dangerous and anomalous, but can be safely and permanently contained. Keter class, on the other hand, designates an SCP that may pose a danger to all life as we know it should the Foundation slip up in keeping it under control.

The real fun of 682's entry isn't even the article itself, but the experimentation log detailing the foundation's many, many attempts to neutralize it. This includes tossing it into basically an arena match with dozens of other SCP objects, every single one of which fails one way or another.

They even shoot out its eyes at one point and put poor little 173 in there with it. The sculpture proves too small to do significant enough injury to 682, and the lizard soon sprouts a series of unblinking new eyeballs along its flanks to immobilize its opponent.

The photograph used, if you can't already tell, is actually a whale carcass mistaken in real life for a "sea monster," as whale carcasses virtually always are if they're just rotten enough. This ostensibly represents 682 still half-dissolved from its last acid dip, but it's hard for me to picture the monster looking a whole lot different from this raggedy corpse. The flesh dangling like shaggy "hair" is just too cool, and I'm glad most fan-art of the creature gives it a nice scraggly hairdo to match.

Basically, we have a single monster so murderous and so unstoppable that it could personally hunt down and kill enough people to fundamentally upend our very way of life, which is just bonkers of course, but that's why the SCP foundation came so close to just being called the TBB or "Totally Bonkers Bullshit" foundation, which I just now made up, but since this is a wide open community fiction project anyway, you can't stop me from declaring it an alternate canon.

A fun one, though it still feels like a "baseline" SCP by current standards; a solid classic.

And yes, I've decided to stay on as the rating indicator. What better way to measure something's greatness than to compare it with my superior toasteriness???