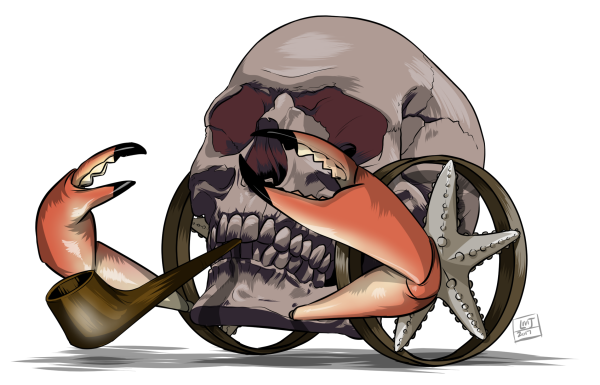 My favorite SCP's to read are probably those with increasingly strange and uncanny exploration or experimentation logs, but my favorite SCP's as concepts are those that constitute "characters," and 1754 is one heck of a character. Mischa illustrates it basically how I pictured it, besides the fact that all its components are supposedly made of bleached bone. I also can't help but imagine him moving like a Jan Svankmajer creation, and he probably stinks like formaldehyde, I'm sure.

The Unskulling Skull doesn't seem to mean anybody any harm, besides the fact that he sometimes likes to give you a light pinch, but the smoke from his pipe is a different story. If any vertebrate is caught in a cloud of the smoke, its skull will disappear and the rest of its anatomy will reconfigure as though it had never even evolved with a skull.

In humans, apparently, this moves the brain to the upper chest, the mouth to the neck, and puts the eyeballs on a pair of snail-like stalks.

What's more, these un-skulled weirdos change down to the genetic level, representing evolutionary lineage distinct from all known chordates. From then on, they also perceive all other vertebrate life as a skull-free version, they no longer remember things being any other way, and the sight of skulls - especially SCP 1754 itself - becomes abhorrent to them.

It's as if the SCP's smoke thrusts a whole alternate evolutionary timeline upon anything with a skull.

There's no attached experiment log describing what happens to non-humans, and we don't really need one, but it might have been pretty interesting to find out more, and find out if some animals in this alternate evolutionary tree might exhibit anything more than just the loss of a skull. What if some predator turns out to imitate the "eye stalks" of another species? What if some invertebrates change just to demonstrate that they would have evolved parasitic or mutualistic habits with unskulled vertebrates? What if, inexplicably, something else - an obscure species of jellyfish, or even a plant - is affected to gain a skull?

All this is pretty fascinating already, but then we hit the interview log, in which the SCP speaks like a neighborly dad from a nuclear 1960's family and doesn't give any relative, coherent answers. I love when it tries to invite the the researcher over for dinner and then completely disregards their response, as though having a completely different conversation in its own perception. Alternatively, as some wiki comments suggest, it may simply be that the SCP is only as "intelligent" as a chatbot or other imperfect simulation of sentience.

The best part of this may be the brief mention that it speaks disparagingly of the beings it has de-skullified, referring to them as "neighbors from down the street" while skull-bearing beings are its next door neighbors.

Perhaps the most adorable detail of this little guy, though, is the fact that he absolutely won't travel over any green-colored surface. We're not told why, but the only reasoning I can think is that it's not neighborly to step on someone else's lawn.

Some existing reviews and comments are of the opinion that this one is too "lolrandom" or too "weird for weird's sake," but to me, this hits an exactly perfect level of the inexplicable. Its elements are just related enough to feel like they hint at a distinct origin and purpose, but the foundation, like the reader, simply has no way of knowing what those would be at this point in time. It's only as "random" as something from our world would seem to the people of an entirely different one, which is the feeling I tend to get from other "nonsense" SCP's. Like the most quality of internet memes, shitposts and dril tweets, it's not interesting or funny because it "doesn't mean anything," but interesting and funny because it has to mean something we simply don't have access to.

When I was a young enough child, pretty much the entire world felt that way, and I think that's a lot of the fun adults get out of the surreal. It takes us back to an ignorance so profound that the simplest things seemed like magic.