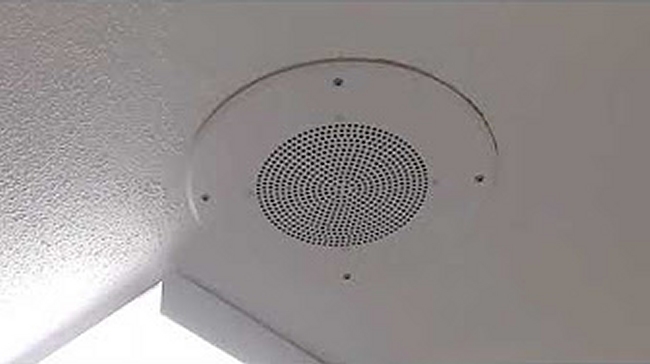 (2018 ADDENDUM: the author of this SCP has removed it and his other works from the site over convoluted "political differences," or something. I'm leaving this review up, but the SCP link goes to an archived version)

Today's SCP isn't an especially popular or highly rated one, but one that I've enjoyed ever since it went up. The "object" itself is nothing but a loudspeaker at foundation site 93, but an unidentifiable being in some unknown reality periodically speaks through it. This being apparently sounds pretty friendly, except that it speaks certain words in a deeper, more threatening octave and seems interested only in convincing our side to submit to "funtime happy game plan," apparently even claiming to be senior staff and other trickery to these ends.

We're given only one brief interview log for this one, but it indicates an entity or entities with a very different manner of thinking and a motivation that somehow succeeds at being both indecipherable and undeniably menacing, with a strong fixation on "fluids" and, apparently, the human digestive system. This is further demonstrated by "gifts" the being(s?) are somehow capable of manifesting into our world, which range from flower arrangements to hard drugs but always somehow incorporate human digestive fluids, my favorite of which are definitely the motion-sensing aerosol cans that just spray anyone nearby with pure stomach acid.

This is another example of a "theme" tying a bunch of "nonsense" together into something that begs ever more fascinating questions. What are these beings? Where are they really speaking from? What exactly is it they actually want from us, and what does it have to do with our digestive processes? What we have here is either a parallel world with an innocent but insurmountable cultural and biological gap, or a hostile enemy whose understanding of us is filtered through too alien a comprehension. It's a fantastic concept and well executed, even if it has been accused of "ripping off" something else entirely:

The author of SCP 2302 has said they were inspired by the Orz from Star Control II, and others have felt that it feels more like a "rip off" than an "inspiration." I disagree strongly. The speech patterns are similar, but the themes present and the questions raised are more than different enough to qualify as their own original concept that also happens to constitute a fun little homage to a PC game from 25 years ago.

2302 is one that I think warrants far more upvotes than it has (42 at the time of this posting), and maybe even some expansion.