SEASON 02, EPISODE 09: Hari's friend Gae-Un and her parents are invited to mingle with her extended family, finding a shocking degree of wealth and extravagance. The parents are blinded by it, but the manners of their wealthy relatives are more off-putting than just your usual high society snobs. They behave especially abnormal during dinner, ecstatically tearing into their food with an animalistic zeal that seems driven more by sheer pleasure than by hunger.

Gae Un's parents take a gift home with them - a ruby necklace - but with it, they pick up that same insatiable appetite and other strange behavior, not to mention the slime.

Enlisting her friends to figure out what's wrong with her mom and dad, Gae-un brings them along on another dinner party, but this time the guests begin to transform into insect-like monsters. You know the kind of insect demon we're dealing with from the title of today's review, but these aren't at all fly-like; they're humanoids with blue-black skin, multiple red eyes, sharp mandibles, slightly elongated faces and especially elongated back legs.

...But never fear! The feasting is all just part of a ritual to summon the true Beelzebub from the caverns beneath the manor! We get a beautiful demonic summoning circle with a design more like a moth-winged skull, a giant butterfly-like chrysalis rising from the Earth, and finally the monstrous fly demon itself. There's a lot of insect motifs going on at ocne here, but they all work well together!

Beelzebub was considered a demon of pride in the writings of the French inquisitor Sebastien Michaelis, but a century later, occultist Francis Barrett would describe it as a demon of gluttony. Here, Beelzebub is a demon of greed, which is being (fairly) conflated with gluttony. It's overall a spirit of selfishness and indulgence, taking enough for yourself that others have to go without.

Beelzebub's minions, which it can also create just by spitting on people, are referred to as "fly demons" in the app game, and maybe this was an artist's loose take on demonic human-fly hybrids, but their jaws and their silhouette is an awful lot more Orthopteran than Dipteran; like a cricket or a grasshopper, or to be precise like a locust! I'm not sure that was the intention, but locusts are a biblical plague, a sign of the apocalypse, and feared entirely for creating famine, so it makes all too much sense to be coincidental.

Beelzebub isn't defeated by any clever problem solving, sadly; this is a cut and dry Monster Attack that really just moves along more story for the demon-fighting characters.

I'm pretty picky when it comes to insect monsters, and especially fly monsters, but Shinbi's Beelzebub is acceptable as far as they go. The four wings are inaccurate to a fly, but accurate to the classic depictions of this demon. Its head and body are exactly a stylized blowfly, complete with the blue-green exoskeleton, white face and red eyes I always love to see. 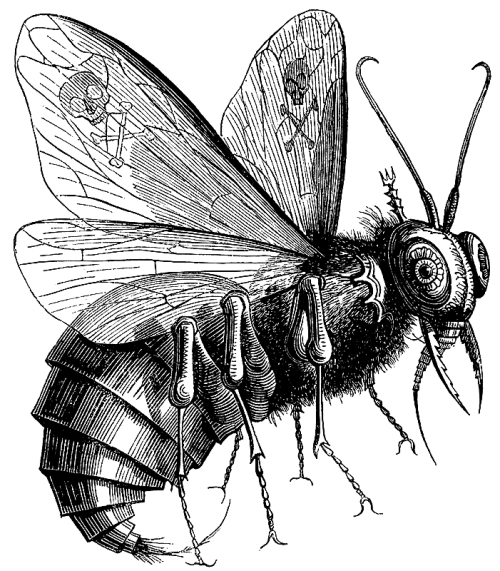 The only thing I can retract points for is the mouth, which is always what makes or breaks a fly monster's design for me. It has a proboscis, which is what's really important, and it's perfectly acceptable to lift the combination of proboscis and serrated mandibles from the classical demon, but they put all this below a more vertebrate-like mouth full of slobber, which makes the proboscis look like some kind of little beard or chin. I think I'd actually like the design better with just one or the other, or placing the proboscis in the mouth like a tongue.

Overall though, not too bad of a zebub by my standards, and its ability to create those locust-like demons is interesting whether or not they were consciously intended to be locust-like. They definitely can't have thought this far into it, while flies aren't quite renowned for either greediness or gluttony, they do thrive from death, and the aftermath of a bad enough locust plague is eventually a land littered with carcasses.

So the second season of Shinbi's Apartment introduces an ability for Hari and her little brother Doori to link up their "Ghost Balls" and summon a combined ghost. There aren't a whole lot of them, and there will be even fewer in these reviews, because I'll only be reviewing one when we've already devoted an October review day to each of its components. Splendidly, the first time we get to do this means I get to review...

I know the only ghost I need. Beelzenurse appears only briefly in one episode to battle a cat-woman ghost, and wins pretty easily. Adding buggy red eyes, antennae, fly drool, insect wings, and long messy hair to Puppet Nurse, she kind of trade's Nurse's grislier horror for pure cool factor and she doesn't evoke a fly so much as some kind of moth, but it's still a battle-monster that draws from Beelzebub and a knockoff Silent Hill Nurse, which is likely never happening again in a franchise like this. My favorite feature may be how the wings go from white to red and each end with a sharp little spine, because I'm pretty sure the intention was to subtle evoke hypodermic needles!

We can't really rate fusion monsters like we're rating individual ghosts here; they exist exclusively as a battle gimmick, they don't get to do anything especially creepy or disturbing, they never factor into any storytelling and their origins are just that two children thought it woud be cool to put different dead people and malevolent spirits in a blender, but we can at least give them one overall score!