"Cathy" smiles wide, dribbling soupy yellow scum. You know what it smells like and what it probably is...but why is it so thick?

You keep as polite as you can without gagging. 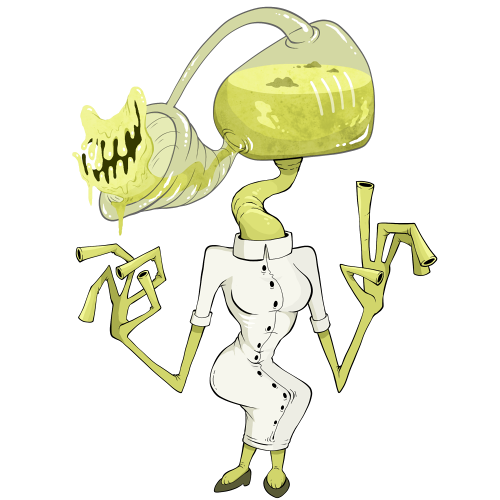 Haha, well, you know that Gynnie! I'm Frannie, by the way. You uh, come here often?

Sure do! That health tea of theirs is just to spew for. I should know...it's made with my secret syrup, wink wink! That's why they don't charge me...want a taste?! Still hot!

Oh, I'm so sorry to hear that! Well, they cater to tastes across the whole wide range, you know! You look total-bio...a flesh squeeze, vibrio or suppuraccino might be just the thing! The 'ccino is especially sweet this spiral; they get the sauce pumped fresh from the necrozones and add a squirt of snoutworm wax for a thicker surface film that'll really coat the nozzles on the way down!

I'm not sure what else you might enjoy, but your kind should probably avoid the SKWANGE this phase if you're not interested in total biovessel inversion! Maybe you're feeling adventurous, though? They did get the froth just right this batch...

Oh, but just listen to me gushing about drinks again...I can't help it! I'm a connoisseur! There's just something about fluids, you know?

That. All sounds. Lovely.

Actually, Cathy, could I ask you a little advice? I am having a bit of a problem, and I'm not keen on bothering Gynnie. She, uh, seems like she really needs her break right now...

Oh my, of course! Always glad to help out a fresh face! Don't hold it in, dear, let it flow!

A what problem? Sorry, Frannie, didn't catch that!

...Or, whatever you may be trying to tell me is a self-censoring conceptohazard. It would have to be a juicy one to exclude Hospital staff, but we've certainly been down that river before.

How about this: what isn't your problem?

Will that really work? Well...

Shucks, that is some potent infoblocking, I only caught half of that, to be honest, but I can tell this thing's really raining on your parade, and whatever you tried so far was a bit of a wash!

If I'm correct that this is some sort of pest problem you're communicating, did you try the usual poisoning or trapping route? You would have to consider an ideal bait, of course, something it would find an exceptionally tempting food source.

I guess that's one thing to try, thanks.

By the by, what's that I'm getting such a whiff of, if you don't mind my asking? Smells...crystallized!