Today, we're going to explore Harmburger and his world of meat. 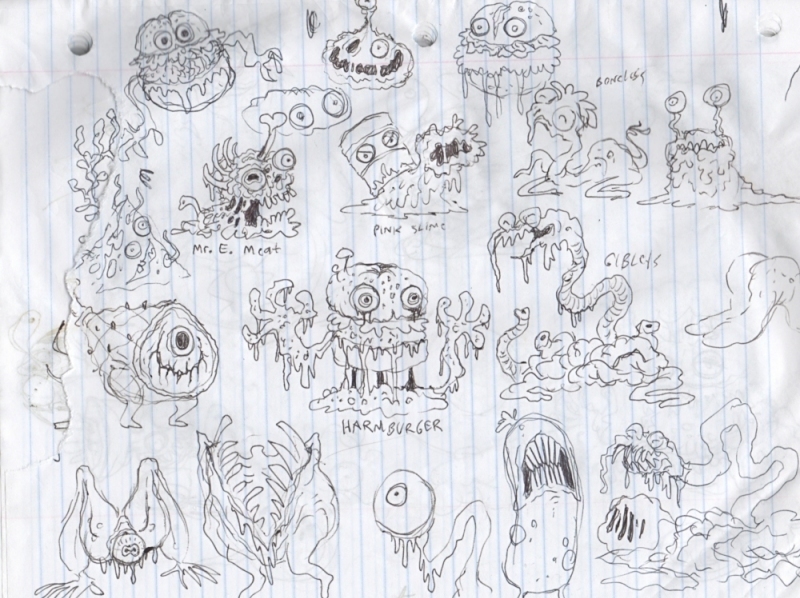 So I'm not completely certain, but I believe this may have been the very, very first drawing ever made of Harmburger, back in I think 2010 or 2011. As with Dr. Phage and many other hospital creatures, I doodled these meat monsters as if I were designing enemies for a game. I liked the idea of a horrible meat-themed world full of meat-themed creatures, but I just didn't know what to do with it. For a while, I came close to integrating it with Mortasheen and got about one monster in before I felt as though the meat-world would only be diminished if absorbed into a setting where nothing about it was all that unusual. 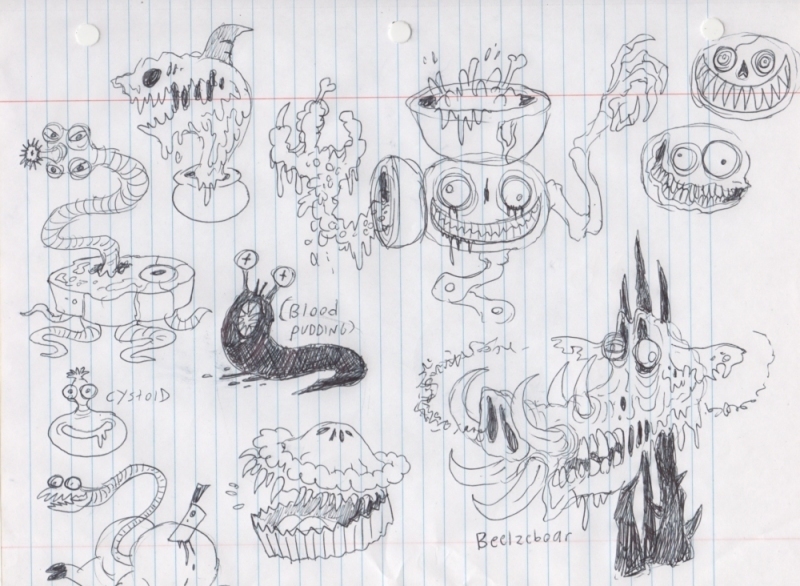 No, the meat world needed to interact with our world to have an impact. My very earliest ideas were for a game, story or cartoon short in which an animal, probably a chicken, has to escape from an increasingly nightmarish processing plant. This probably sounds like it was going to be PETA propaganda...and I'll admit, it at least jokingly crossed my mind to pitch it to them for an exorbitant amount of money knowing full well that, like their other gruesome video game creations, people might only get into them ironically.

I decided to stop putting any deeper thought into getting even tangenitally involved with people that evil, and thought more about getting back into flash cartoons or even a webcomic with an actual plot to it. 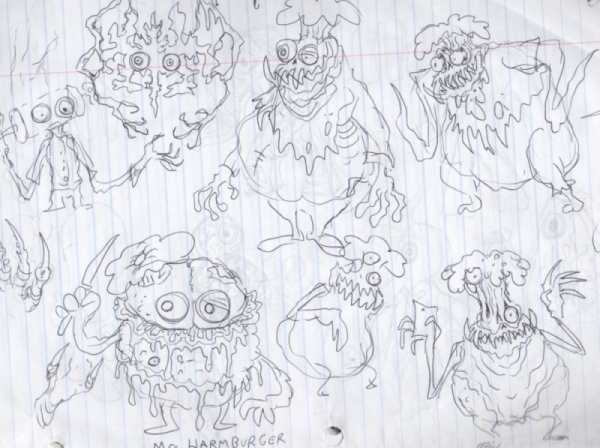 For a while, I was actually getting into designing "supervillains" with the sort of cartoonishness seen in (the better version of) The Powerpuff Girls, though I actually never did come up with any hero counterparts I liked. These villains included your typical robot-building mad scientist (reduced to just a living skull at some point in his life) a bee queen I totally didn't rip off from those 90's Secret Squirrel cartoons, and of course, a creepy butcher who does really weird stuff with meat.

Possibly due to tying in with an established concept, this wound up the only character I really gave any attention to, and went through dozens of different designs ranging from just slightly scary humans to anthropomorphic animals and finally a big, greasy anthropomorphic burger, apparently MISTER Harmburger at this point, which I wound up liking the most.

As with Dr. Phage, putting eyes on some food isn't really one of my more creative ideas, but that's exactly what I liked about it. The simpler and more obvious the idea, the more "iconic" it feels, and somehow, I just hadn't seen a gross giant hamburger as a chef and butcher in anything. This was his very first colored doodle, before I trimmed him down into a flatter and even cartoonier design.

At this point, I was still thinking of him as something a "superhero" would have to battle against, but this would have been a villain with deliberately ambiguous origins and goals. A weird, gross, cryptic meat man always up to some weird, gross, cryptic meat stuff that's obviously bad for the general populace but doesn't make a whole lot of sense. Is he some twisted human in a costume? A mutation? A space alien? It never would have been known.

Eventually, I decided I had to do something with this guy, and I settled on a short story I still get messages about from people who don't even know anything else I've ever made. If I'd written it all over again, I might have trimmed down the rambling list of unusual meat products, but I guess I just had way too much fun coming up with them and more difficulty narrowing anything down at the time. 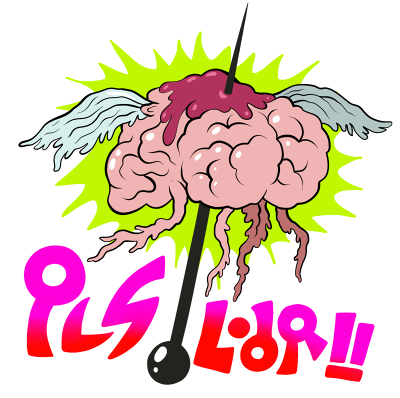 Anyway, I get asked about this most of all, so we'll have to talk at least a little about burgrr.com. It was 2013, in my mind the most numerically significant year Halloween would ever have until 2031, and I wanted to do something really special. Creepypasta author Chris Wolfe, also known as Slimebeast, had long wanted to collaborate on some big project of some kind, but neither of us were sure what, and I eventually posited an idea to expand on whatever the heck I was getting at in the Harmburger story. 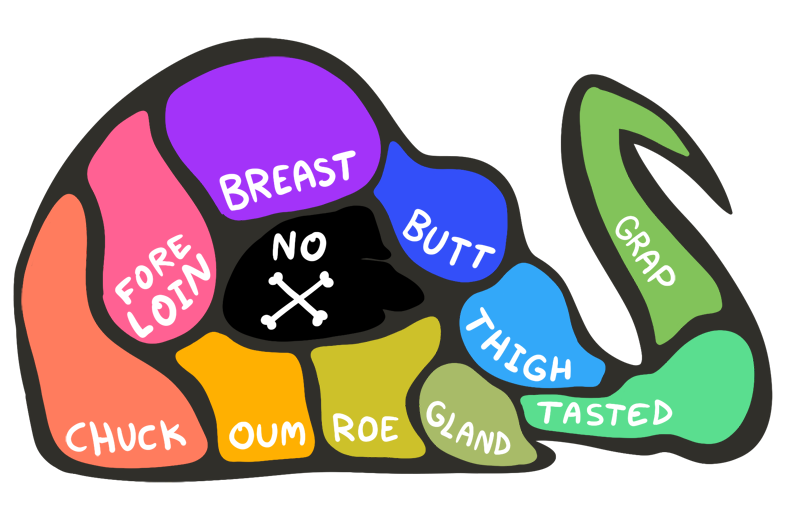 I wound up positively swamping Chris with content and ideas. I drew dozens of characters and monsters, rambling feverishly about an interconnected Alternate Reality event and a website full of secret pathways, easter eggs, puzzles and an unlockable mini-novella. He was the one who landed "burgrr.com," one of the only meat-related URL's not bought up by a real fast food company, and he would end up doing everything that building a website actually entails; the coding, scripting, layouts and buttons are his, as well as about half of the site's text, which he expanded from the "coporate statement" and other distorted nonsense I initially sent him. The storyline, illustrations, world and gibberish style were my own, along with a loose outline of the ARG pathways that he trimmed and rearranged and made workable.

By finding secret codes scattered around bogleech.com, readers could unlock the story of Harmburger's master plans chapter by chapter, which I wrote in a couple stream-of-consciousness sittings with minimal editing or initial outlining...which unfortunately really shows. Once again, I clog up a story with far too many detailed descriptions of various weird little things, more like I'm writing a list. Maybe some day I'll go back and abridge the whole thing. 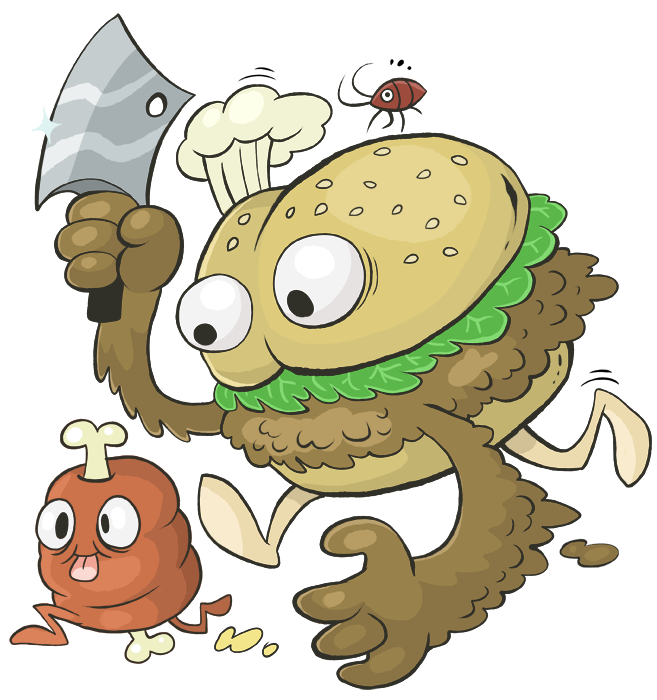 A couple of years later, Chris and I would "go our separate ways" and neither one of us could keep burgrr going. He didn't want to be paying for it, but he didn't want me to be paying him to keep it up, and I didn't want to be hosting something myself (and getting ad revenue from it) if I didn't do the technical work. You can still sort of find it on archive.org here, but a lot of features are broken. It's perhaps appropriate that what was once an endlessly cycling "trivia fact" and random meat-creature on the front page is now permanently stuck on a "secret" one that, originally, appeared only at midnight. 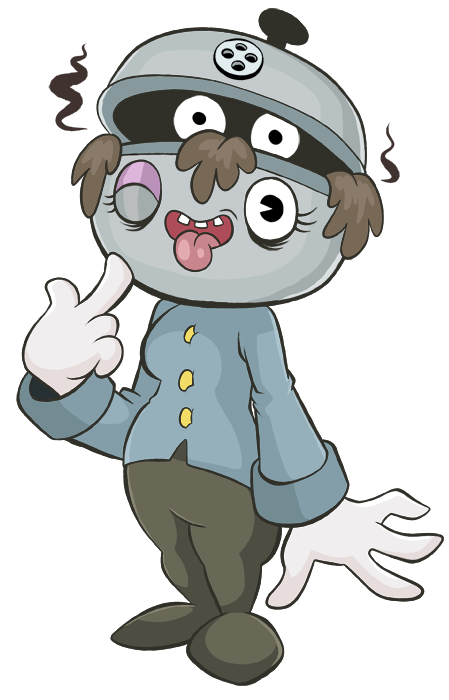 Fortunately, by that time, I'd already been running Awful Hospital and already given the meat monsters a little more development as characters. Originally, Harmburger would have only been a minor cameo in the cafeteria room, but when people got so enthused for his appearance and suggested we try to romance a giant sandwich, I knew I couldn't leave it at that, and I wound up completely improvising the non-interactive BBQ Girll sidequest and door boss on the spot, which you guys now seem to find one of Awful Hospital's most memorable sequences. 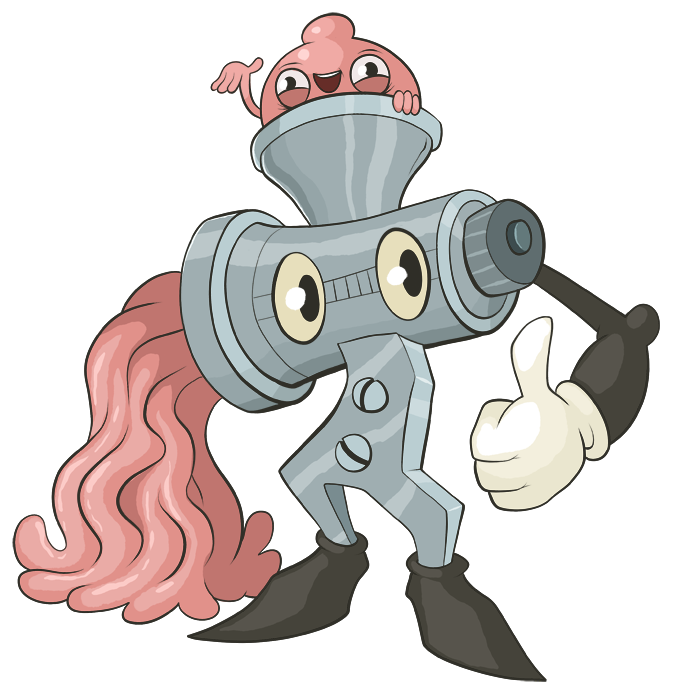 Unless you started reading this page before any of the rest of Awful Hospital, you probably know we haven't seen the last of these guys by a long shot...

Expect one more of these "behind the scenes" pages regarding Awful Hospital itself as a series, and after that, we'll dive straight back into the comic. You Fern ??? STOLE that key from the garbage, like a garbagey thief, and it's going to earn you another little story dump.