The Lepidoptera - the butterflies and moths - have long been cast as just about the wimpiest bugs on the block. Besides a couple kaiju to their name, these fuzzy fliers are the insects most frequently associated with rainbows, dewdrops, posies and unicorns. Most of a Lepidopteran's life, however, is spent as a caterpillar; a larval stage geared completely towards eating, eating, and more eating. The briefer period spent as a butterfly or moth is devoted entirely to reproduction - some moths don't even have mouths - and can be thought of as more of a caterpillar dispersal unit than "adulthood" as we know it. As caterpillars, Lepidoptera display a whole range of weird forms, and aren't always the peaceful leaf-eaters we've come to expect... 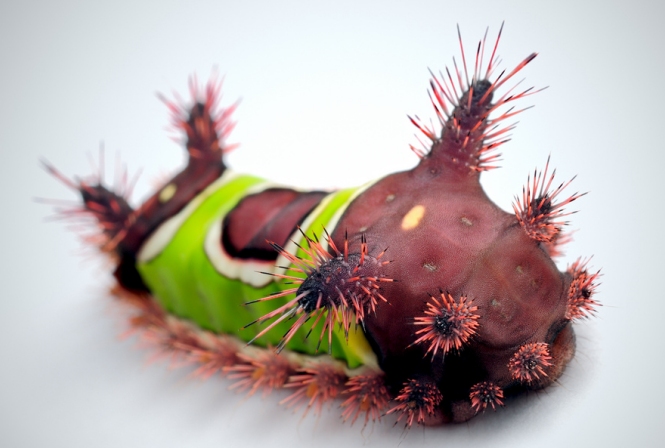 A member of the "Limacodidae" or "slug caterpillars," these boxy, tank-like "saddle backed" caterpillars are heavily protected in all directions by thin, fragile bristles filled with a noxious venom. At the lightest touch, these vicious quills break off in the skin and cause intense, burning pain that can persist for days. 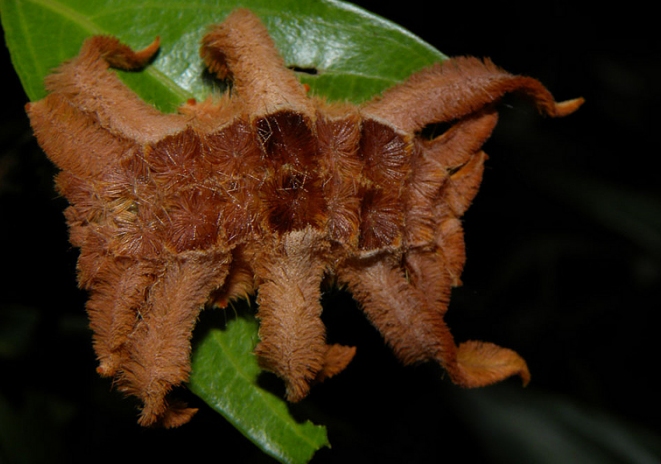 Another "slug" caterpillar worth mentioning is the larval stage of the "hag moth." Though quite harmless, these are certainly contenders for the world's least caterpillar-like caterpillars, somewhat resembling flattened, hairy hunks of rotten vegetation or tree bark. Though they lack a potent sting like some of their cousins, their gnarled tentacles can break off in a predator's jaws like a lizard's tail. 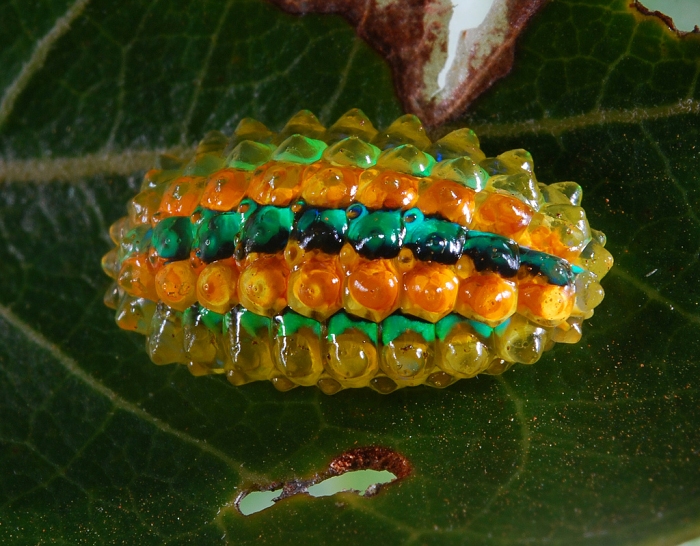 These stunning beautiful caterpillars may look like delicious, fruity gummy candy, but their gelatinous surface is apparently how they discourage other creatures from snacking on them, particularly small insects such as ants. The rubbery, sparkling outer flesh is as soft, sticky and gooey as it looks, easily coming off and gunking up the jaws of small predators. 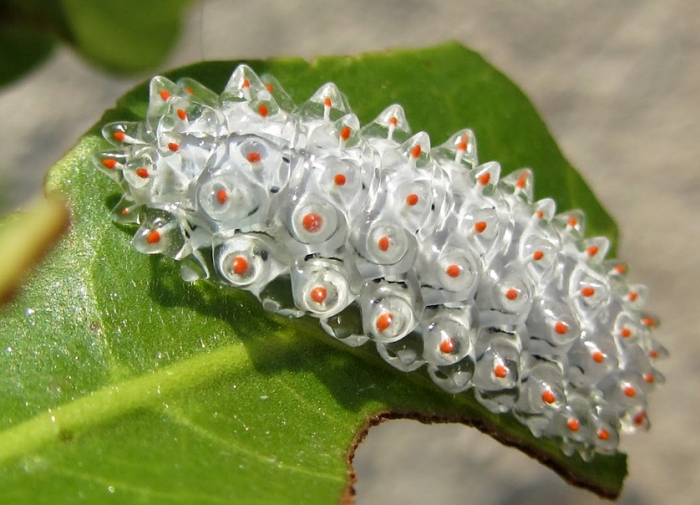 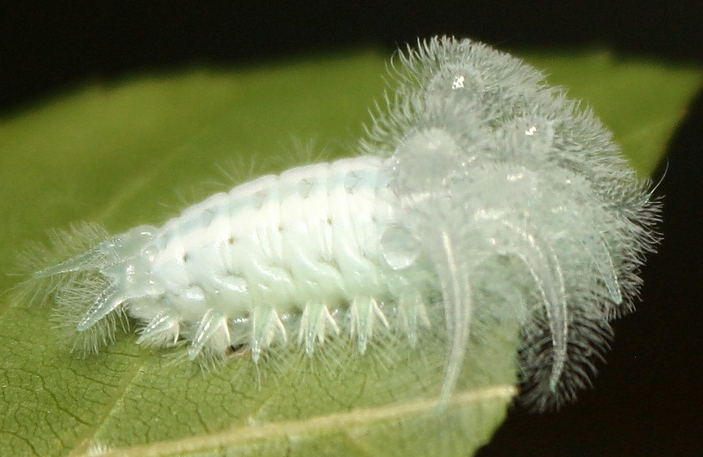 I like how this one looks like a perfect combination of our previous three; the transparency of this particular slugapillar probably helps it to blend in with the surrounding foliage, especially when sunlight filters through the leaves. Its body would not only be cast in green, but it wouldn't cast a shadow as distinct as other caterpillars. When all else fails, its tentacles can, as you may have guessed, break off. 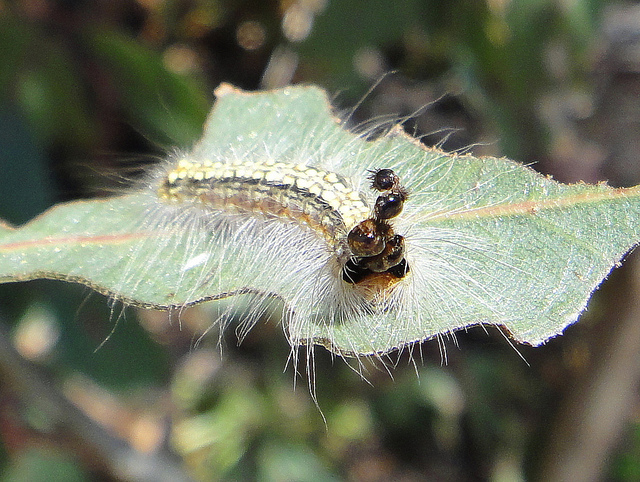 
Referred to by Bug Girl as a "mad hatterpillar," Uraba lugens is also known as a "Gum Leaf Skeletonizer" because it reduces children gum leaves to their bare veins. Every time it molts, its old head capsule (insect "skull") seems to get caught in its bristles, many specimens retaining all of their previous faces like a stack of incredibly terrifying hats. It's not fully understood what purpose this unappetizing totem pole may serve, as the caterpillars are already well defended by their toxic hairs. Perhaps they serve as decoy heads to fool some sort of parasitoid? 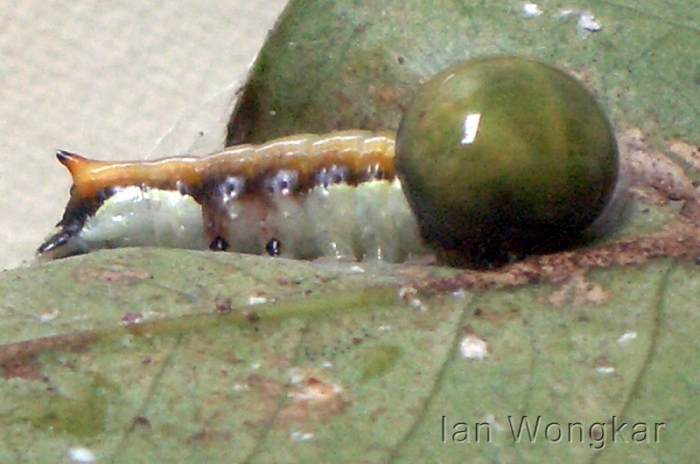 Related to the mad hatter, several species of Nolid caterpillar can pump fluid into a soft spot just behind their head, inflating it into a rather unpleasant looking globule. This has been speculated to imitate an unripe, foul tasting berry to discourage predation by birds. 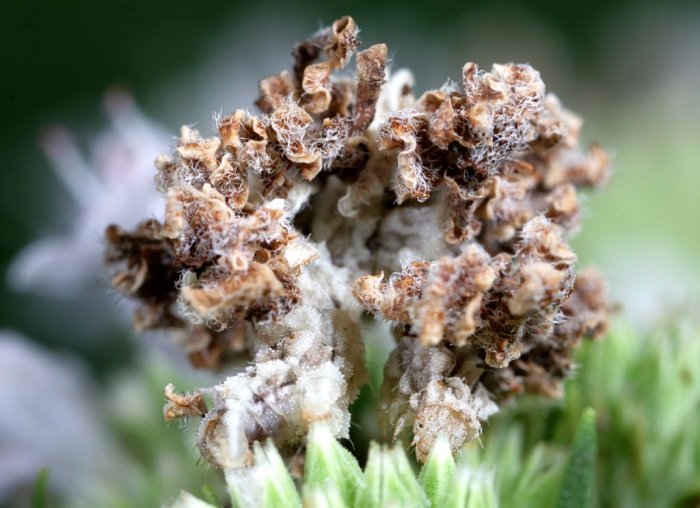 While many caterpillars resemble leaves, twigs or even bird droppings, certain inchworms in the Synchlorini tribe use their own silk to weave a custom stealth suit from bits of vegetation and other debris, resembling some sort of tiny, walking flower garland. 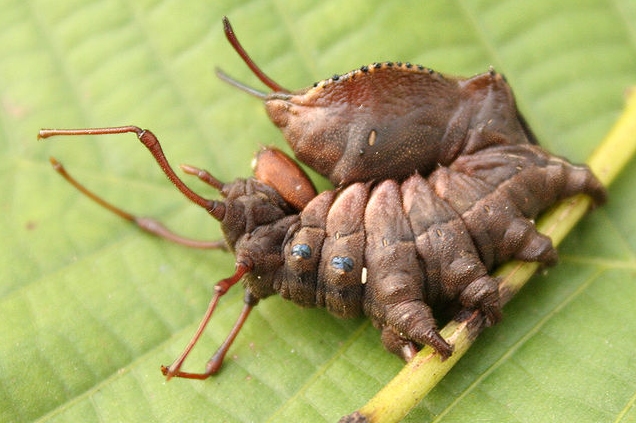 Another harmless freak, the larval stage of the lobster moth is highly unusual among caterpillars for its long, thin forelegs. As tiny hatchlings, these strange caterpillars deter predators by flailing and spasming in the same manner as injured ants, which most other insects prefer not to tangle with. When they grow larger and more threatening, they can ward off predators just by curling backwards and waving their legs in the air. This display could be an effort to imitate a venomous spider, or at the very least, not look like a caterpillar. Imagine a sandwich transforming into a completely unidentifiable soup before your very eyes...are you really hungry enough to risk it? 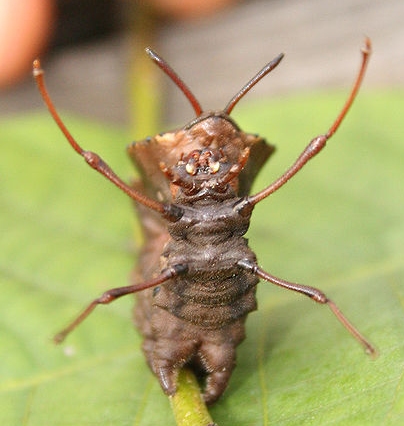 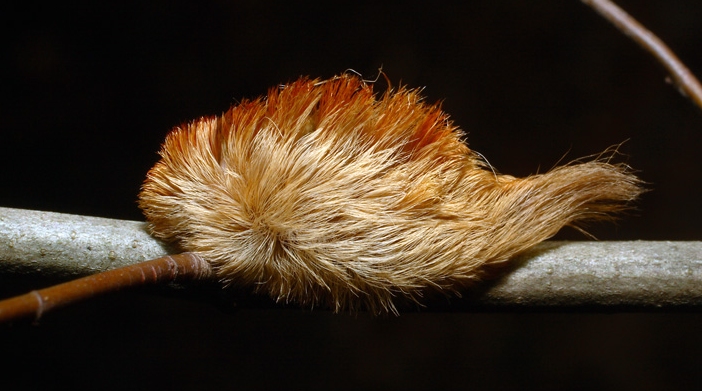 These miniature (penny-sized) walking mullets are most commonly called "puss moths" or "pussy caterpillars," but also go by the rather ominous "tree asp." The same long hairs that make it look so huggable unfortunately conceal dozens of spines even more toxic than those of the saddleback. At best, you're lucky to get off with a couple of oozing hives. At worst, the pain can spread throughout the body causing several days of headache, nausea and difficulty breathing. With such a potent defense, these toxic tribbles needn't even spin a protective cocoon, but pupate inside of their own hairy skin. 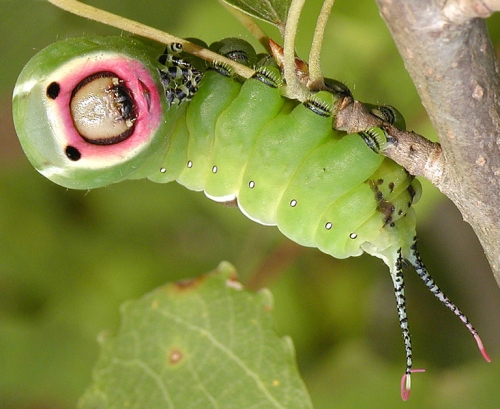 The larva of an entirely different, unrelated "puss moth," this fat, tasty worm looks fairly ordinary at first glance, but startle one and it just might startle you back. By pulling in its head and rearing up, the caterpillar shows off a colorful mask that says "I'm scary and I'll probably squirt some kind of acid into your eyeballs if you don't go away." Formic acid, to be precise, squirted from its dual tail filaments - the same acid that makes a bee's sting so painful. 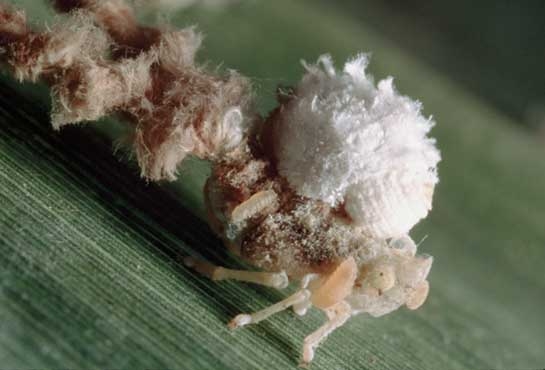 The fluffy lump atop this planthopper (a Hemipteran, or true bug) may look like a part of its body - especially since many planthoppers naturally produce a wool-like protective coating - but this cottony blob is actually a parasitic caterpillar, sucking the host juices like a plump, woolly leech while younger, smaller caterpillars attack the hopper's sides. This particular planthopper is a major pest of sugarcane, and these life-sucking moths have been introduced to many crops as natural pest control. 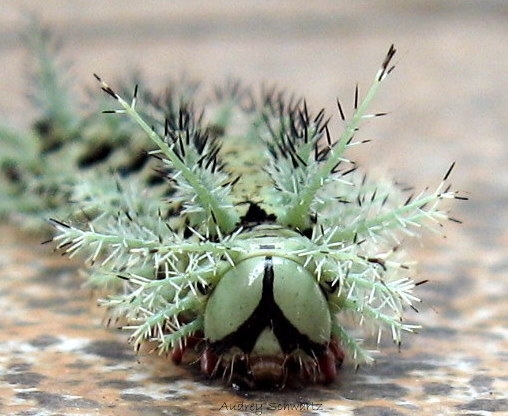 Somebody must have had a cute sense of humor when they chose "Lazy Clown" for this Brazilian caterpillar's latin name - a lazy clown responsible for several human deaths each year. While only around 2% of stings from a single Lonomia are fatal, the same can also be said of a rattlesnake's bite, and Lonomia manages this with less than 0.001% the dosage of venom. Pound for pound, its toxins may be among the animal kingdom's most powerful, and stings from multiple worms at once are enough to cause massive internal bleeding, kidney failure and the rupturing of blood cells (hemolysis). 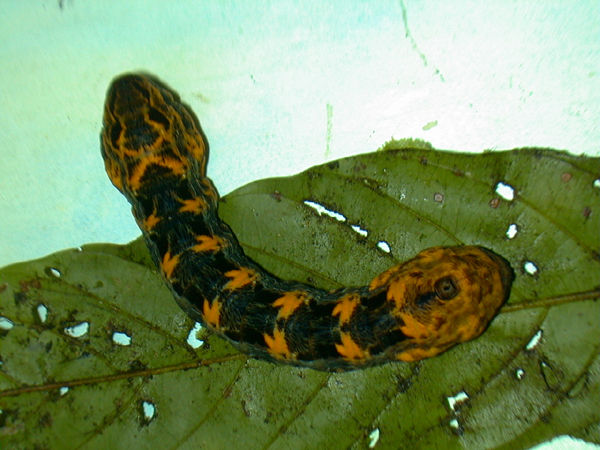 We've seen that false eyes and faces are a common caterpillar contrivance, but two species of Eumorphidae - E. phorbas and E. labruscae - sport just a single, isolated eyespot on their rump, which they can even animate, twitching tiny muscles so that the eye appears to blink and dart around. Normally, caterpillar eye spots are thought to mimic snakes in to ruffle the feathers of avian insectivores, but if snakes don't have eyelids and don't blink, what are these caterpillars trying to look like? Lizards? Rodents? Or is there some undiscovered, bird-eating eyeball slug native to the same region? Truth is, it probably doesn't matter; anything unusual or unexpected can be confusing and distressing to small birds, as any bird owner can attest. 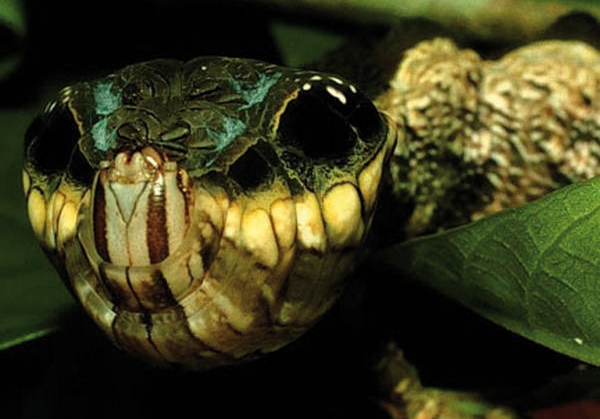 Speaking of snake mimics, certain caterpillars in the genus Hemeroplanes have taken serpentine simulation to astonishing extremes, evolving not only eye spots, but scale-like markings and a reptilian "head" shape, all concealed along the underside of the caterpillar when not in use: 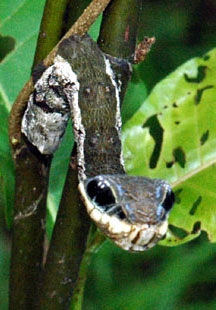 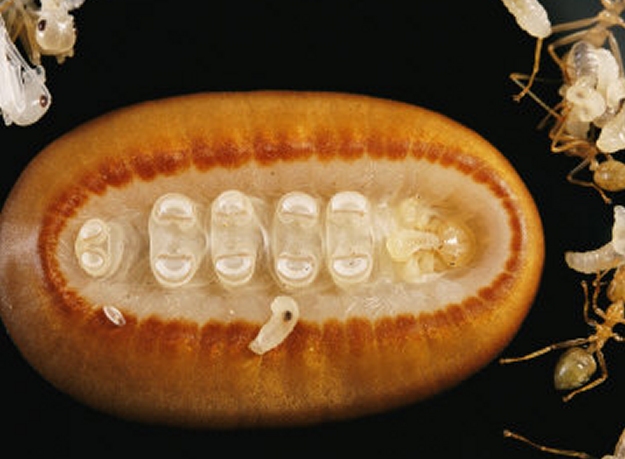 This bizarre little killing machine bears a striking similarity to the maggots of Microdon flies, sharing both the sucker-like body shape and appetite for ant larva, but while Microdon uses a pheromone disguise to avoid detection by the ant nest, Liphyra has simply developed the perfect ant-proof body, with a carapace too thick, smooth and heavy for ants to get any sort of grip on. Shrugging off hundreds of little jaws, the caterpillar can leisurely devour an entire ant brood grub by grub, trapping them under its shell-like body and sucking them right out of their own skins. After pupating in the same impenetrable dome, it emerges as a butterfly covered in soft, sticky scales that easily come off in the ant's jaws as it flees. 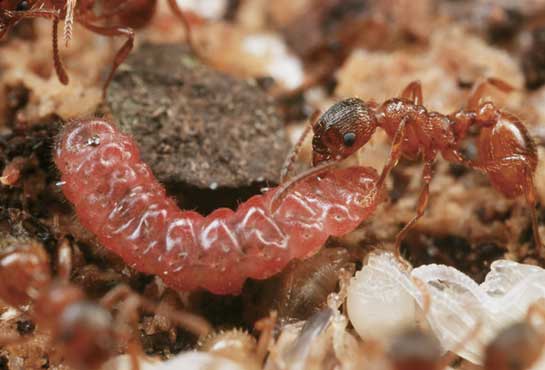 Another, more subtle inhabitant of ant nests, rebeli cateprillars mimic the odor of ant larvae, the sounds produced by ant queens, and even secrete a sugary fluid ants find irresistible. Nurtured and protected by an ant colony as one of their own, the caterpillar's signals are so strong that it may even receive preferential treatment over the true queen. In one experiment, queens were found to recognize and attack these impostors, but were turned upon by workers - their own daughters - who broke up the fight and carried the caterpillar to safety. The caterpillar will even snack on ant larvae, and workers may deliberately feed it eggs and young when food sources are low. Imagine a giant, baby-eating worm declaring itself president...and everybody falls for it. Actually, that might be pretty cool. I'm sure it would have strong environmental policies. 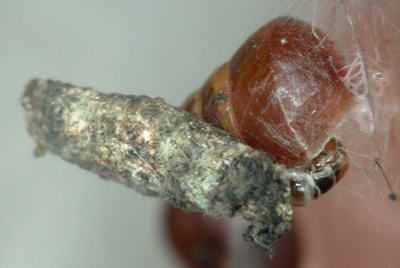 One of the few strictly carnivorous caterpillars and the only known variety to trap its prey with silk, the "mollusk eating" bag caterpillar is native to the few remaining forests of the Hawaiian islands, where it was discovered in 2005 by biologist Daniel Rubinoff. Like other "bagworm" types, this half-inch larva carries with it a casing of silk, but employs this as much as a a hunting tool than a defensive shell. When it encounters a tiny land snail, it attacks like a sewing machine, binding the prey in place with a series of silken strands. Wedging the edge of its bag under its victim's shell, it follows the snail inside and feeds at its leisure. Later, it may even incorporate the empty shell into its own bag, offering further protection against caterpillar-eating predators. 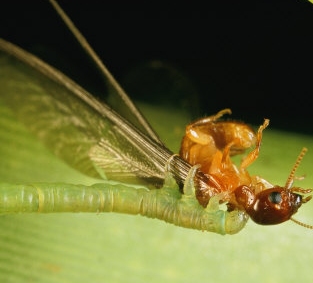 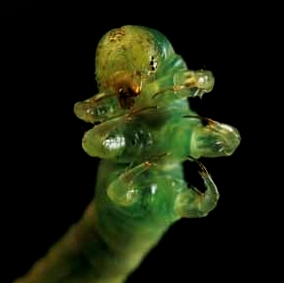 Geometrid or "inchworm" caterpillars are common throughout the world, but on the Hawaiian islands they include some of the earliest predatory caterpillars ever discovered. Like most other inchworms, they rely on their resemblance to a twig or shoot to camouflage themselves, but have modified this tactic from purely defensive to a form of predatory ambush, behaving like the preying mantis and other stealthy carnivores. 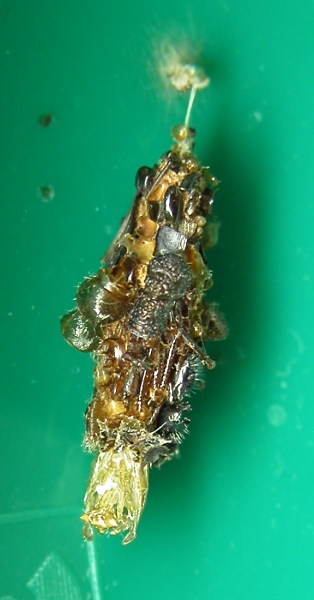 At last, we come to what may be the darkest caterpillar you'll ever meet, a close relative of the common leaf-eating bagworm and one of my personal favorite insects. Like its cousins, carnivora constructs a protective casing out of the remains of its meals, but instead of dried leaves, bark and pine needles, this portable house is as morbid as you may have already guessed. Anchoring one end of its bag to the underside of a leaf, it lies in wait for passing insects or even spiders and springs out like a murderous Jack-in-the-box, its thickly armored head protecting it from the defenses of its struggling victim. Legs, wings and random hunks of exoskeleton are added to its bag in an ever-growing collection of grisly trophies, speculated to attract even more insect prey with its decaying stench.