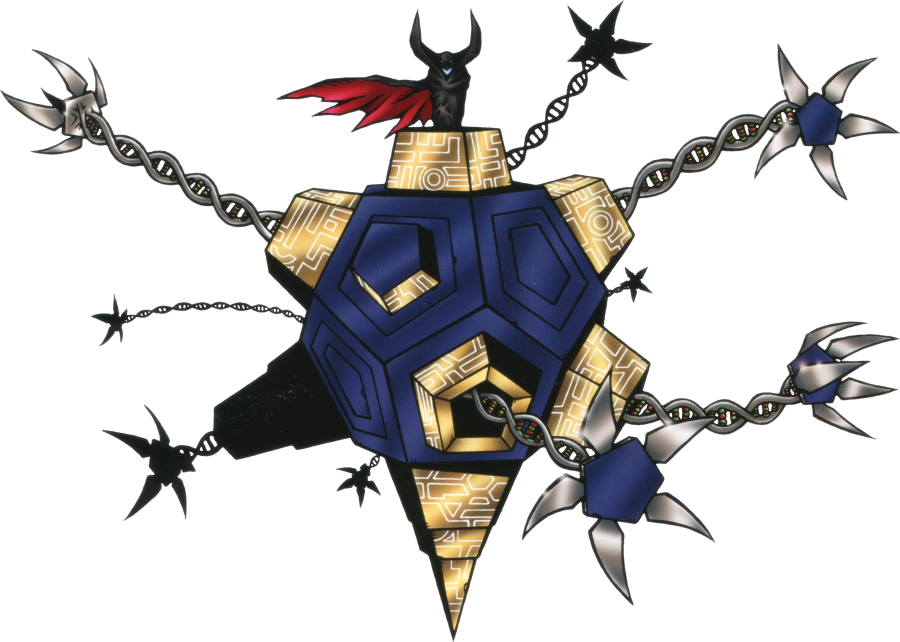 This digimon's a doozy! Just when we all thought the Dark Masters were done for with the destruction of Piemon, here came the Ultimatest Ultimate Bad Monster of the original anime continuity, a demon being supposedly formed from the data of all the digimon to have ever died or disappeared in the process of digivolution; an embodiment of extinction itself filled with hatred for the living, and appropriately the most GIGANTIC digimon ever revealed at the time! What immediately stood out to me about this digimon was the apparent inspiration it drew from Hellraiser, its polyhedral lower body bearing some very strong resemblance to the Lament Configuration (Pinhead's Rubix Cube) and the floating whatsit referred to by the second film as Leviathan, apparently the ruler of hell. Apocalymon's claw-tipped "chains" even seem like a nod to the hooked chains of the same film series, though up close, the digimon's appendages are actually giant DNA strands! Meanwhile, Apocalymon's exposed upper body seems to borrow more explicitly from The Phantom of the Paradise than even the dozen other digimon who opted for this look, which also inspired a few Jojo's Bizarre Adventure stands, the main bad guy from Berserk and loads of other anime and manga characters, because this otherwise obscure retelling of The Phantom of the Opera was a pretty huge hit in Japan and basically only in Japan (though it's not too bad a film at all).

Apocalymon, of course, throws in some more digimon-like features including big, bandaged claws and a lot of creepy, veiny flesh fused into that big contraption.

What many fans remember best, however, is how much difficulty the English dubbers apparently had taking any of this situation seriously. The dub is fairly notorious for the numbers of jokes and references it injected throughout, and even this tortured amalgamation of the dead was given such legendary lines as "why do you guys get the pizza, when all I get is the crust!?" and my personal favorite, "I am the Ultimate Evil, complete with hot and cold running water!" - which is funny as hell because he says it exactly as the scene first panned up his humanoid body, drawing our attention to those two differently colored hoses. I honestly wouldn't trade this silly dub for anything. In fact, I don't think I've ever encountered an unpopular, awkward, low-budget or otherwise ostensibly "bad" anime dub I didn't earnestly enjoy. It's really just too bad that anime fandom has gone mainstream enough that the art of calling a rice ball a "donut" has become a thing of the past.