Germs of the Body - Page Two! 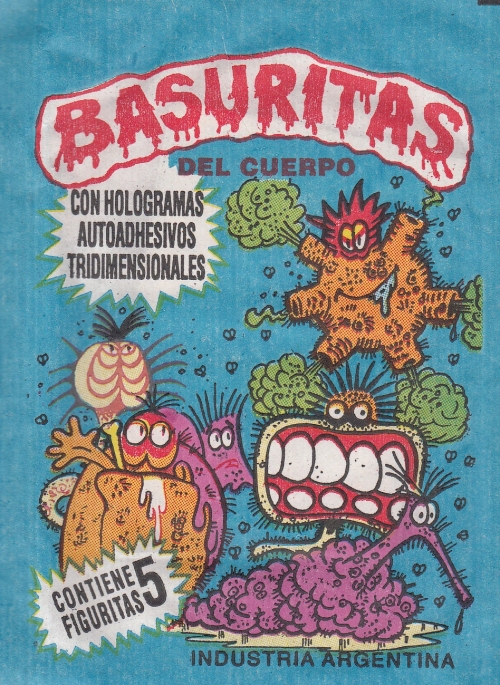 Continuing from where we left off, here's more Germs of the Body stickers! 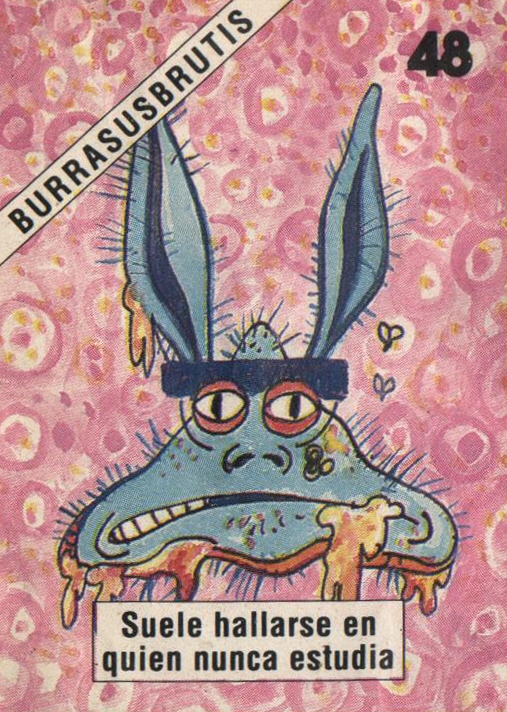 This next germ seems to be nothing but an ugly, long-eared head with a hilarious, giant unibrow and bunny-ears. Actually, this one looks a lot like some slovenly cousin to Ickis from Real Monsters. A lot of these germs would fit right in to their world. The text says this is found in those who "never study." An ignorance germ! 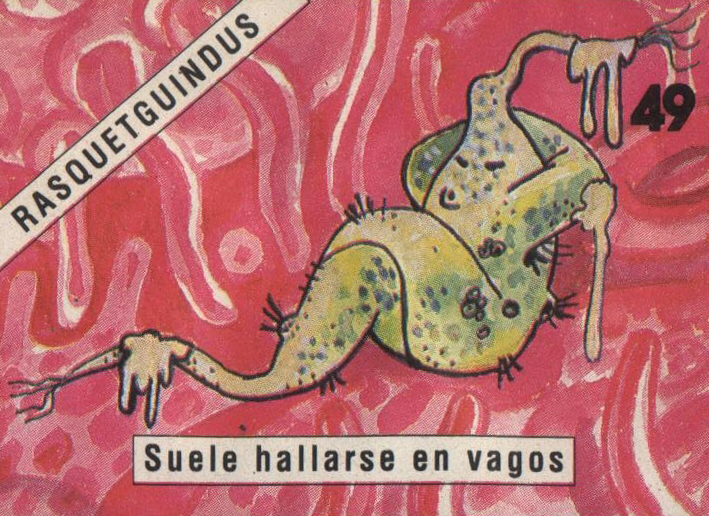 This tapering booger, meanwhile, is found in those who are generally lazy. This is an especially germ-like germ. Without the arms and face you would have a reasonably accurate representation of many bacterial species. 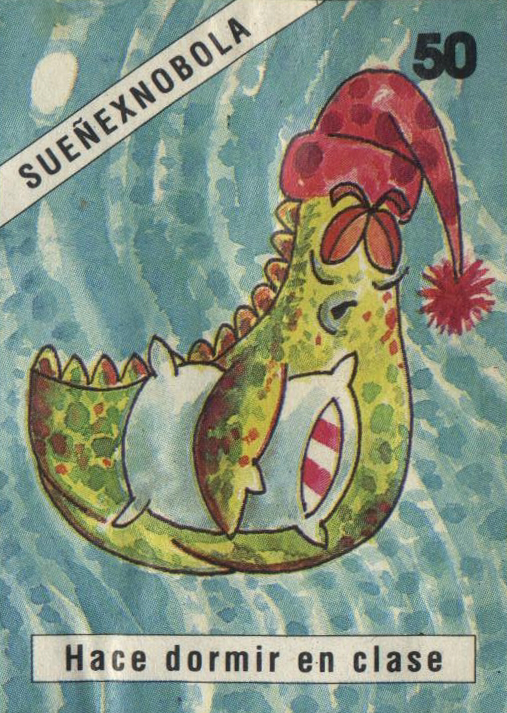 This little guy, on the other hand, is found in people who sleep during class, but still isn't a combination of our last two. Instead, all three combine into our next one, though it's not an especially interesting design: 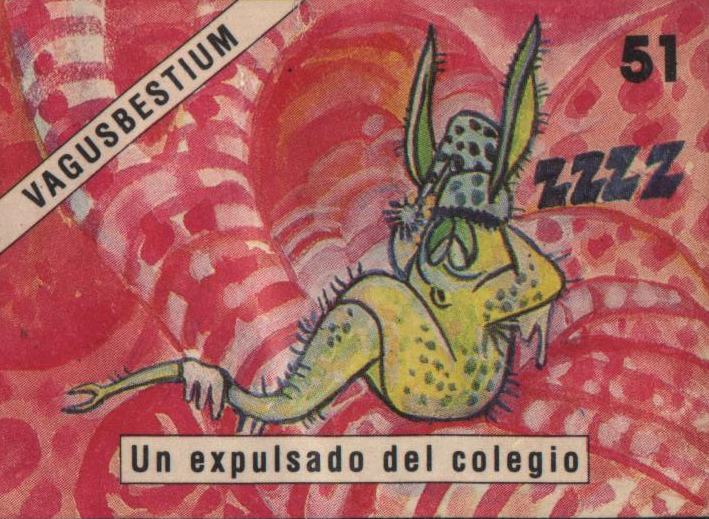 Yep, just lazy with ears and a nightcap, almost a copy/paste job, except I don't think that existed when these were made. I guess it makes sense for the laziest germ to have the laziest art. 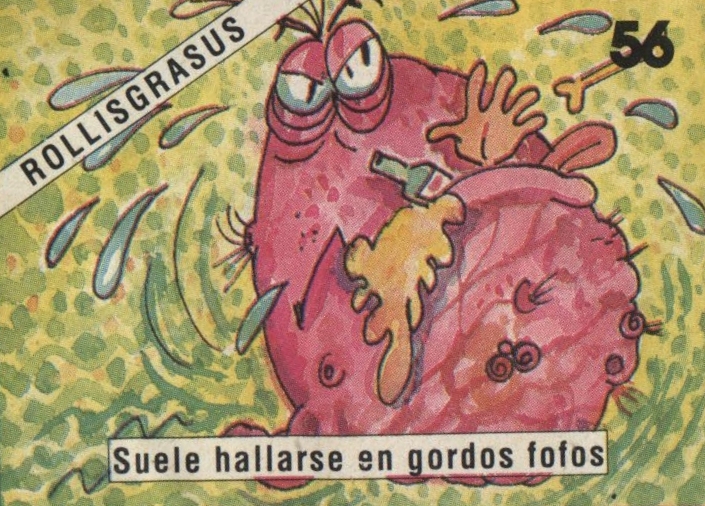 Card 56 is a repeat of tubby from the previous page, but heck, let's include those anyway. He's drawn a little more dynamically, and still munching on quantum impossibilities - now with a beer bottle! No wonder Doctor Shrinkenstein got himself eaten. Let this be a lesson to everyone about drinking in the bloodstreams of filthy little children. 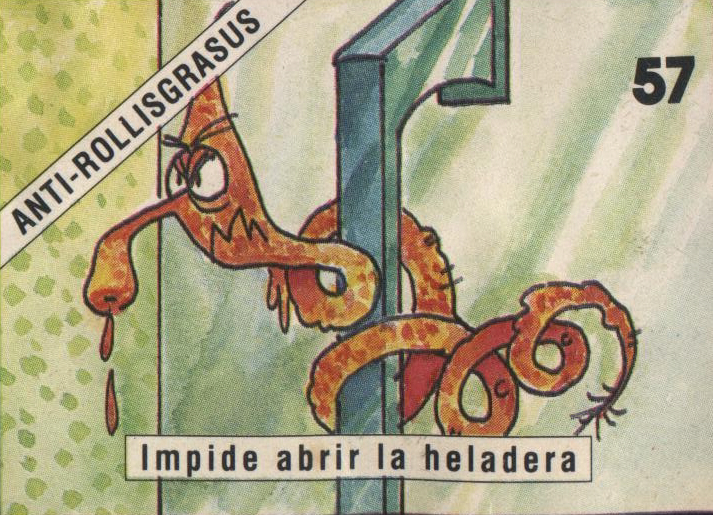 This germ's name implies that it's the enemy of the bulbous man-eater...and translation says it prevents you from opening the refrigerator. Does...does he hurt you or something? Does he spray acid from his dribbly nose and bite your fingers off with his jagged teeth? That's more than a little excessive. Maybe you should just accept yourself for who you are before resorting to giant fridge-door bacteria demons. 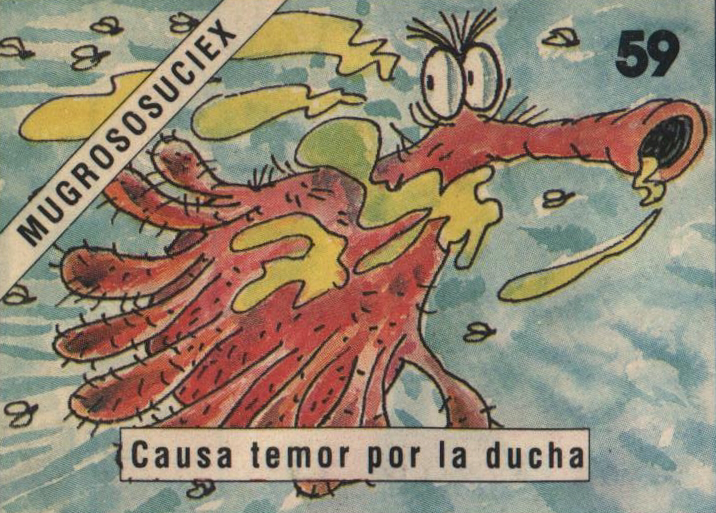 Attracting flies with its terrible stench, this snotty trumpet-faced critter causes "fear of the shower," or a refusal to bathe. As a paranoid hygiene freak this is probably one of the worst "germs" I can imagine, but I can't fault the little guy for what he is and how he lives, especially when he's so damn adorable. 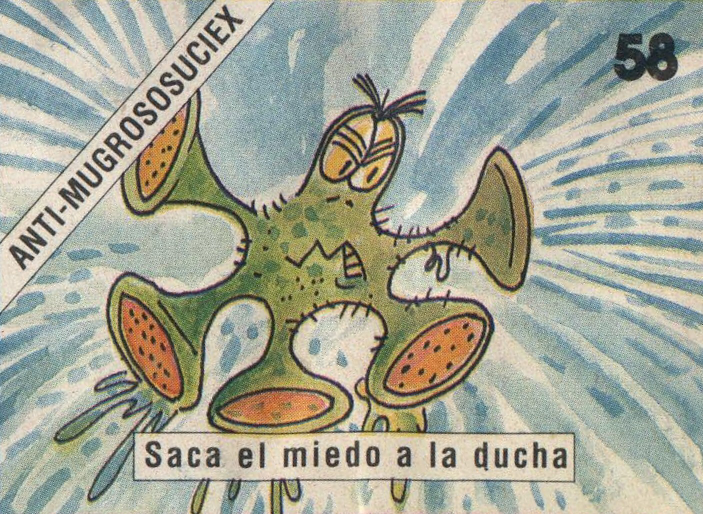 Dirty-germs foil - perhaps antibody? Is that what these are? - is another meteoric looking blob, with pretty interesting organic showerhead appendages. I'd already live in the shower if I could, but if we cleaned ourselves with little monsters like this, you'd really never get me out of there. 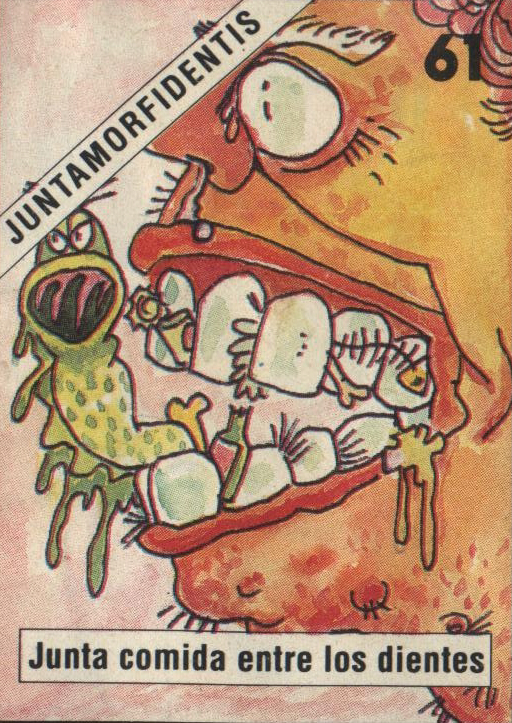 I...what? EUGH. The Germ here, associated with disgusting food residue in your teeth, is just sort of average for these guys, but what the hell is wrong with this person? Why do they have lizard eyes? Why have they been eating tiny bottles and cans? Are they a giant? Did they eat a tiny village?? 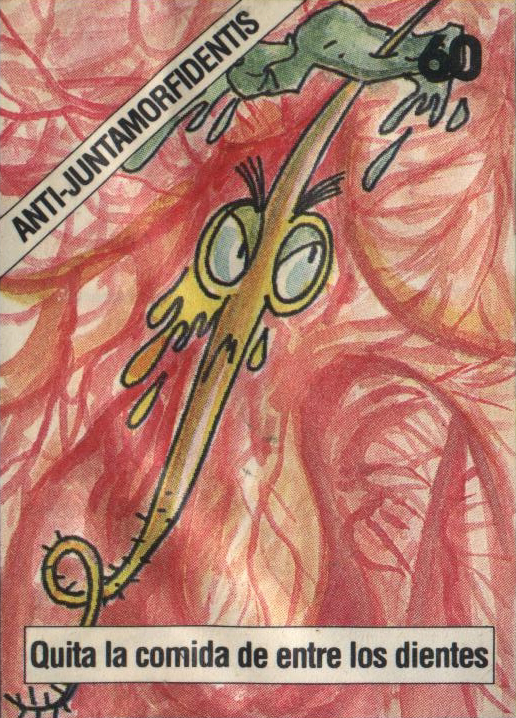 Juntamorfidentis is kept in check by a fairly logical toothpick-like critter, even if filthy teeth are the least of my concerns with the mutant ogre-man. I like the curly tail, like this thing just springs itself clear through its germ victims. 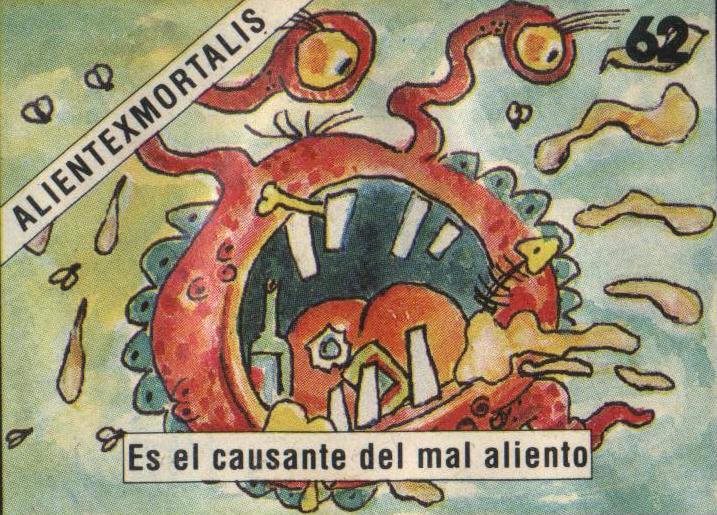 Oh man. Another germ with a mouthful of tiny garbage, though there's a little more emphasis here on the idea, with this being a bad breath germ, and the design is just darling. Wiggly eye-stalks are the quickest route to my heart, especially tipped with yellow eyeballs, my favorite monster eyeball coloration, and adorable long lashes! 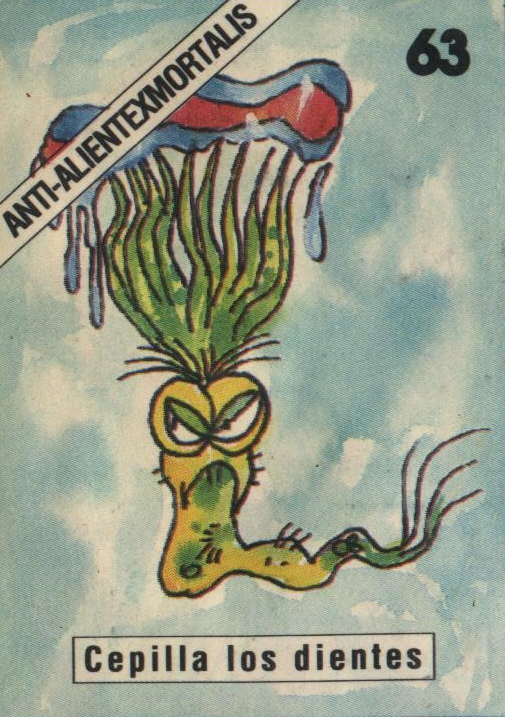 On the other hand, few things bother me worse than having unclean teeth. 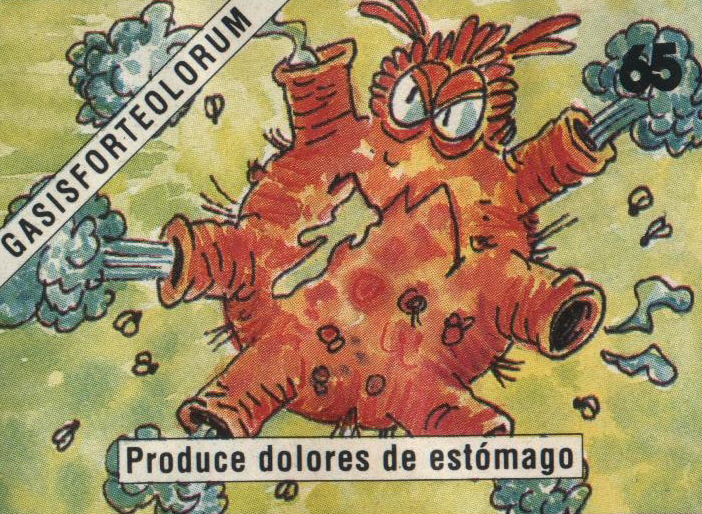 Gasisforteolorum gets an extra card of its own, and again, much more exciting artwork. The more jagged mouth is a little cooler, too, though you know where this is going already... 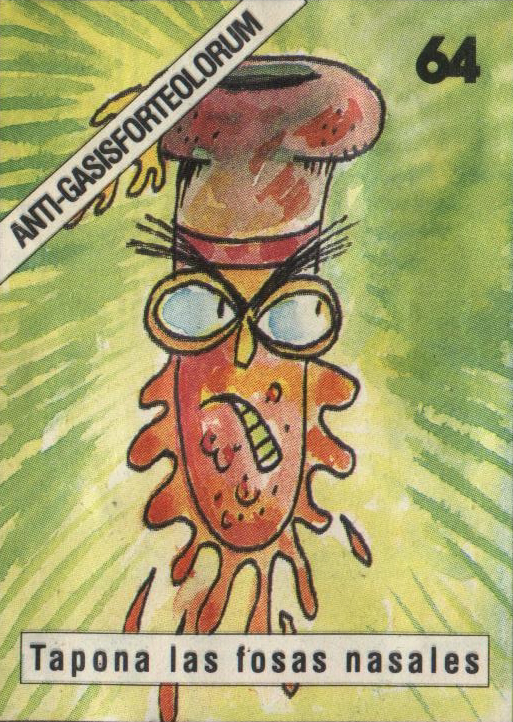 Why do almost all the antibodies look like such jerks? I mean, Gassy doesn't look too friendly, but that's in more of an endearing, grumpy animal kind of way. This test-tube looking dweeb just seems like an aggressive tool. Luckily, he's the very last of them; from here on out, disease rules uncontested. 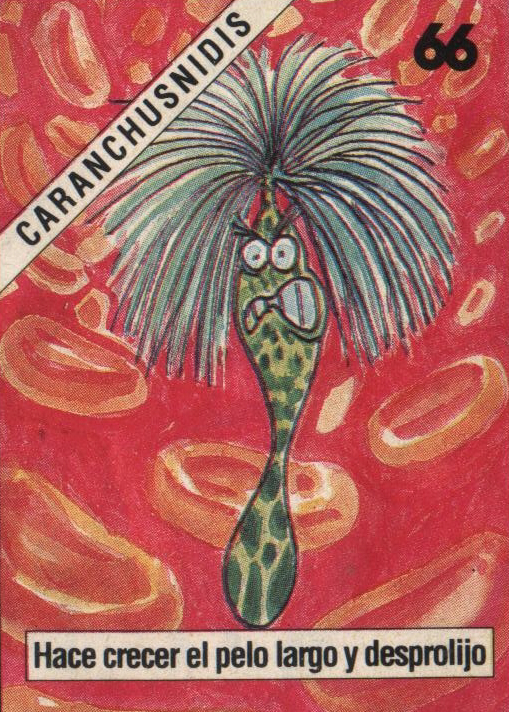 Caranchusnidis is apparently responsible for messy or overgrown hair, and has the most hilarious look of utter frustration in the whole bunch. This little dude has snapped. Maybe he's seen one too many of his friends impaled on jumping toothpicks. Or maybe he's just jealous of the next guy's awe-inspiring beauty. I would be, too, if I had to sit behind him in a sticker album forever. 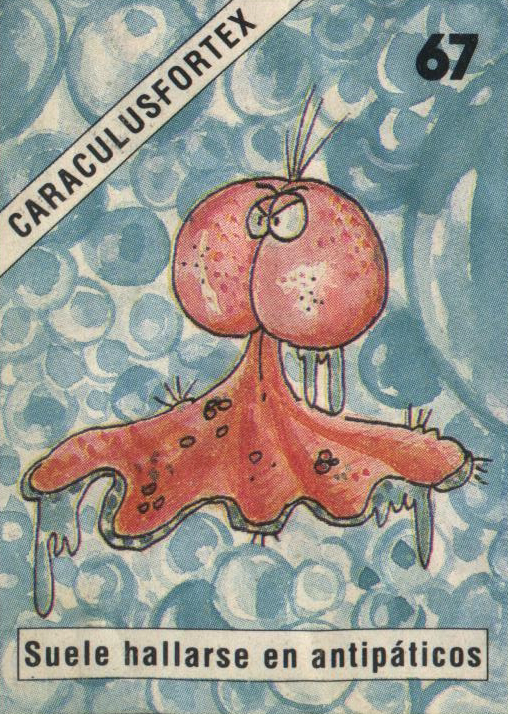 What'd I tell you? Caraculusfortex is immaculate. It has a butt for a face and a dangling amoeboid puddle of a body and together they form a creature in the shape of a leaking butt. This is it. This is the absolute pinnacle of evolution. Its text only apparently says that it's something "disagreeable." I fail to see how that's possible. 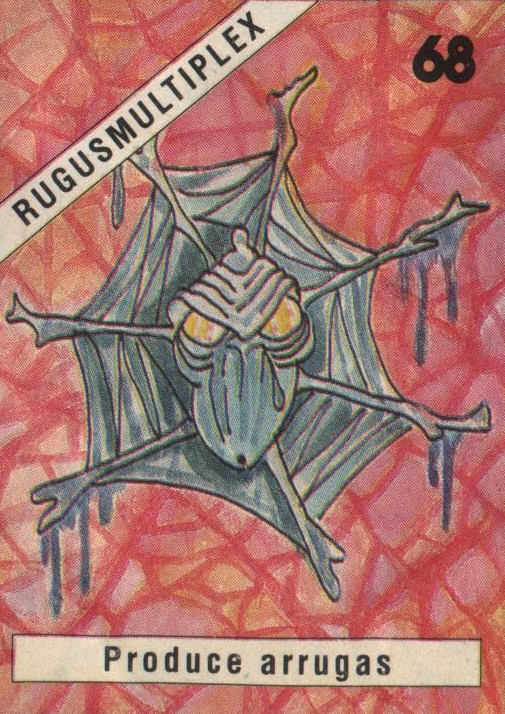 Rugusmultiplex is pretty interesting, resembling a creepy, aging alien monkey-face at the center of a fleshy spider web. It'd make a pretty terrifying monster, really, and it already is for a lot of people; it causes wrinkles! 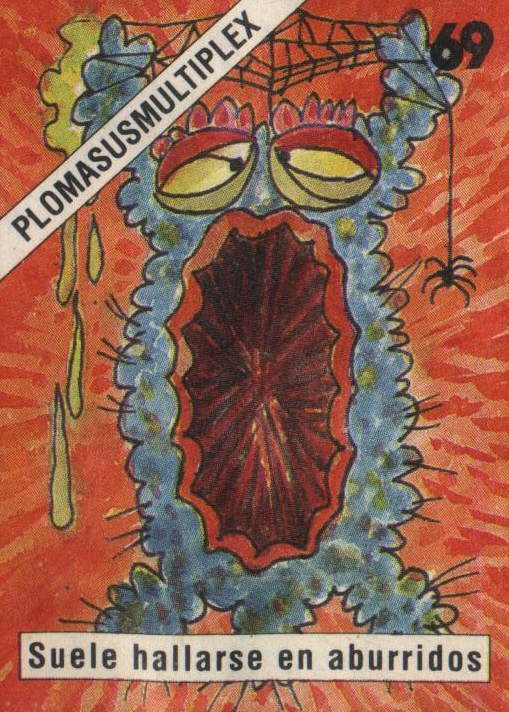 Now, this one really looks like one of the Worlds of Wonder "Germs" toys; specifically Yoggayoggyitus, the "Yawn" Germ, and even their concepts are complementary; this little guy is found in "boring" people! I don't know how anyone could be boring with groaning warty pickle-monsters in their bloodstream. The way it plays "cat's cradle" with a spiderweb is some incredibly cute multi-layered symbolism; this might be one of my very favorites.