Germs of the Body - Page Three! 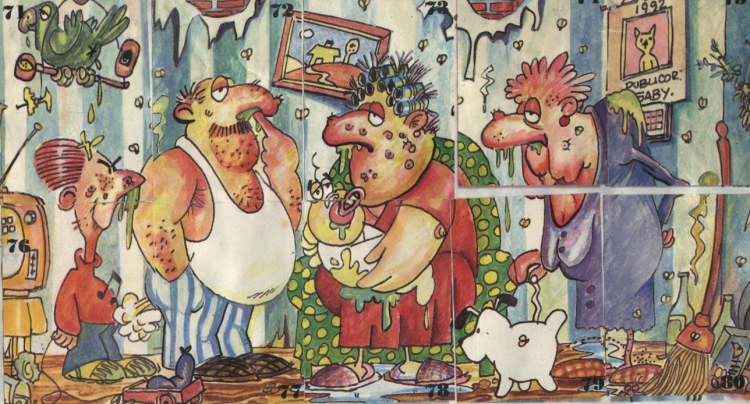 At this point, the cards take a detour into some short narratives about a filthy, disgusting human family, apparently infested with every single germ in the set. I'll be skipping most of the story scenes between germs, but at least check them out in the full album scans back on the first page! It's incredible just how revolting these cartoon people are, while the microorganisms responsible for their nauseating hygiene are such charming, whimsical creatures in a vibrant and colorful world. In other words, a spot-on representation of reality.

Did I ever mention I'm actually a bit of a germophobe? I get sick more often and detest it at least slightly more than any normal person. My entire childhood was a continuous chain of fevers and infections until I was finally homeschooled, and even today, I come down with a cold like nothing. As much as I love rotten, grimy, slimy monsters, the body fluids of strangers and what may lurk therein are my single greatest fear in life, and the very sight of snot can make me retch. This giant puzzle is pretty much what the outside world looks like in the back of my mind. This artist did a fantastic job. 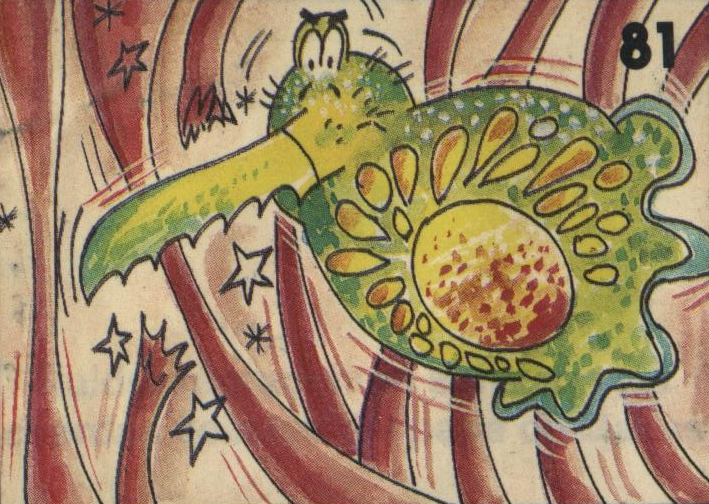 Anyway, back in the microverse, we've got this saw-beaked protist, unnamed, apparently living in the filthy dad's sinuses, sawing away at his nose-hairs to make him snore. It's a funny concept, and a really cool design. 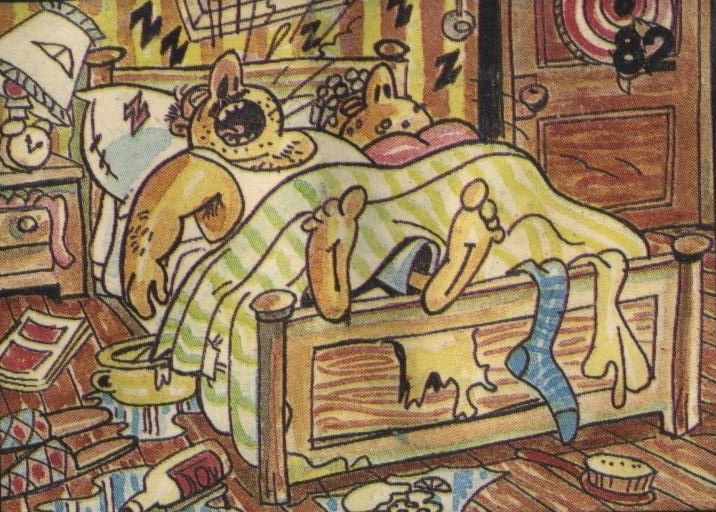 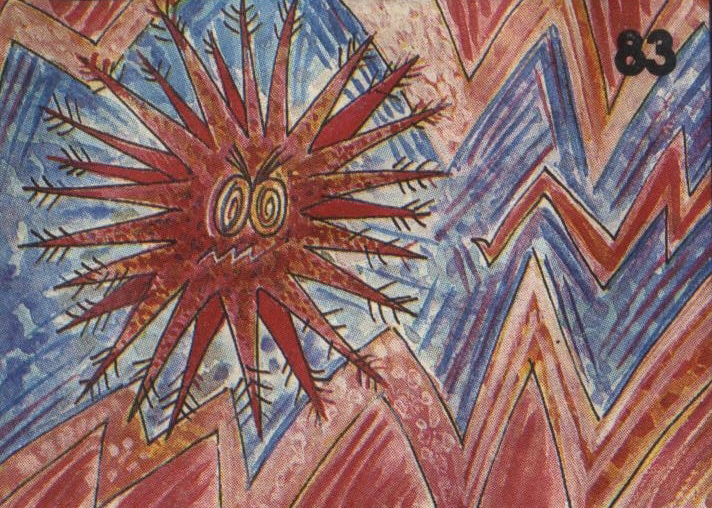 This one is explained later as Nervisflojum, a nervousness germ. It's a little more ambiguous why he's here, but might just assist the snore-germ in some way. I love its crazy eyes. 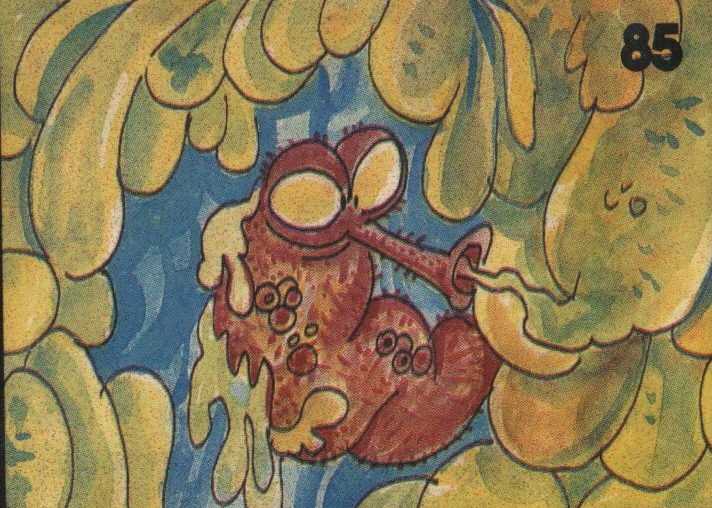 Even more snoring, I presume, since that's all filthy dad keeps doing between these shots. I'm not sure if this little creep is slurping up or producing mucus, pretty gross either way, but I'd probably still pat him on his cute little buggy-eyed fly head. 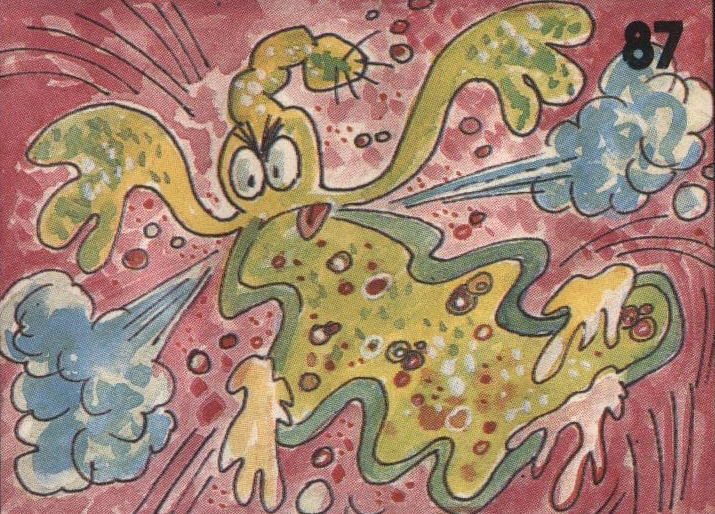 As filthy dad tosses and turns, we see armpit sweat again, doing what he does best! Merry Christmas! 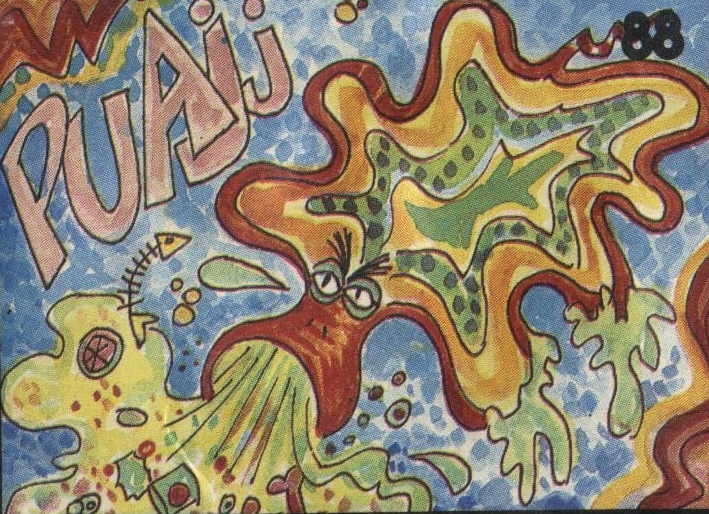 No mistaking this one. This germ causes our restless sleeper to wake up and hurl. Ugh. Still another really cool design, with its huge puking mouth-tube and colorful flatworm-like body. 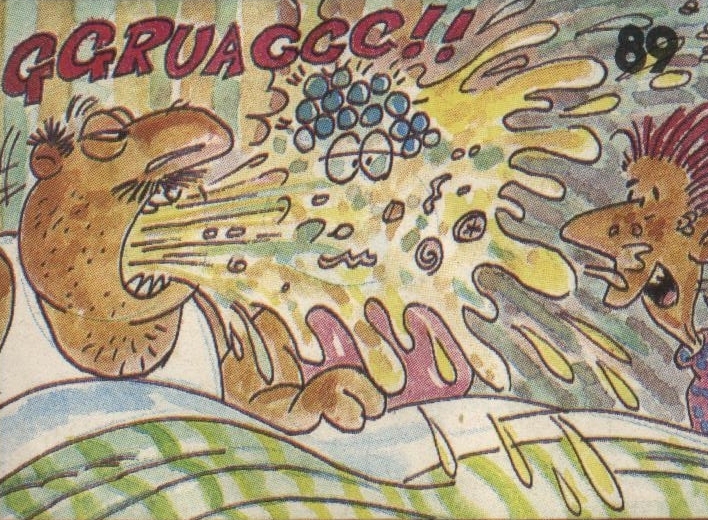 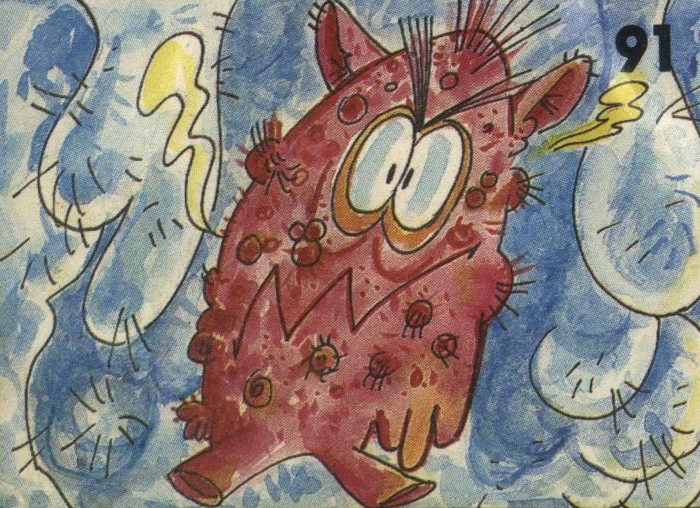 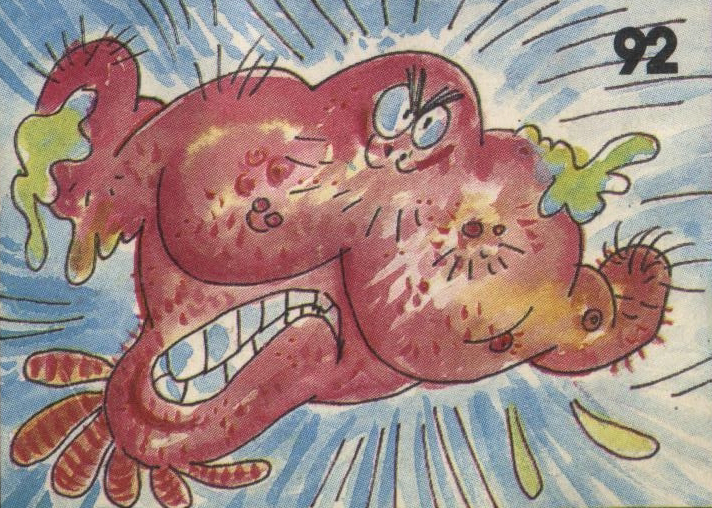 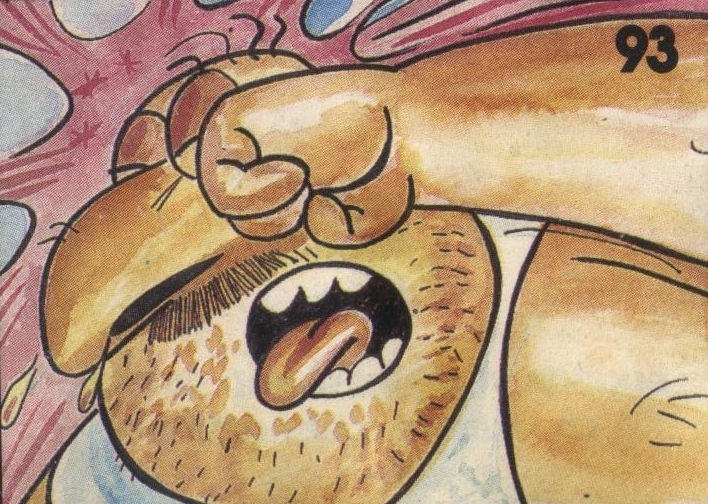 Having already had her gastric facial yesterday, filthy mom is driven by her violence germ, Violentistrompasus, to sock filthy dad right in the face. Yeah, I would too. Not much to this design, but it definitely looks like angriness. 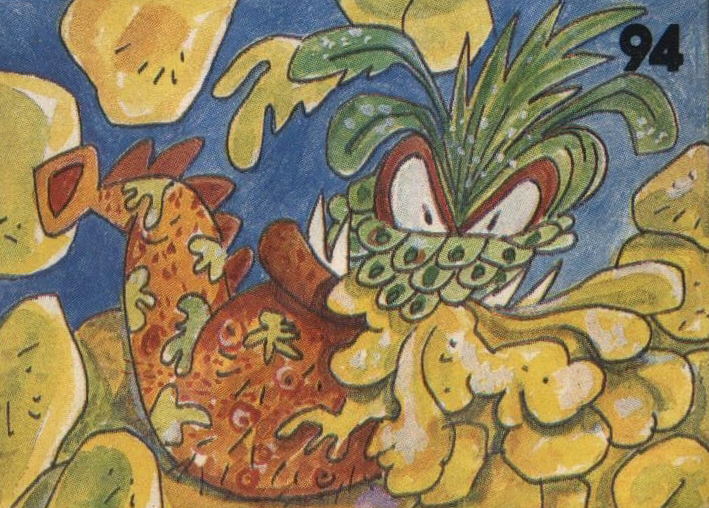 No real clues are given for this one, unless it's supposed to be a fusion of the three "snoring" germs, though it doesn't quite look like it. I like the scaly, pineapple-like head, which apparently protrudes from the middle of a big circular sucker-mouth. 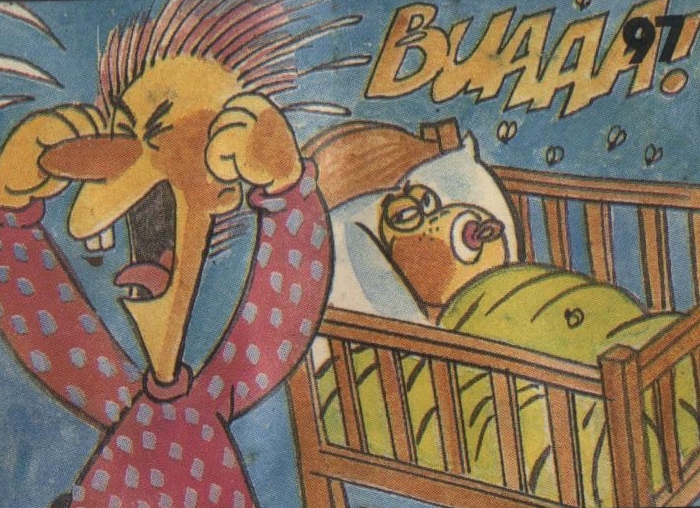 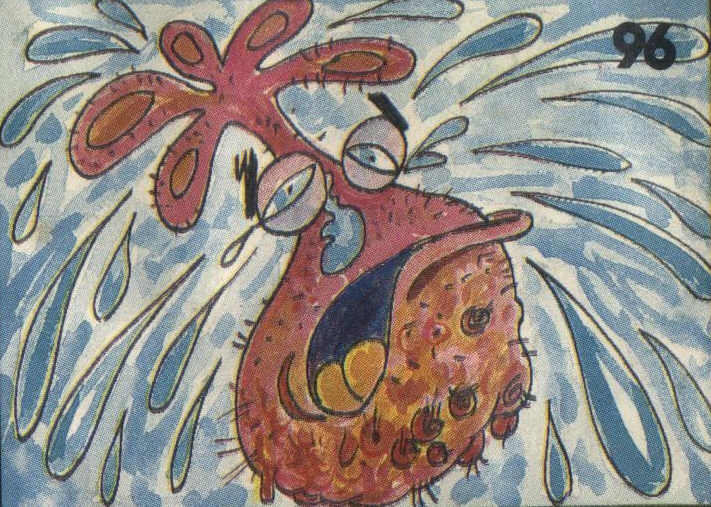 All the ruckus drives filthy teen to tears, with a little help from a truly miserable sadness germ. At least, that's what we're lead to assume, but I'd look like this too if I lived in one of these people. Things get worse, though, as the baby wakes up - a lot worse. 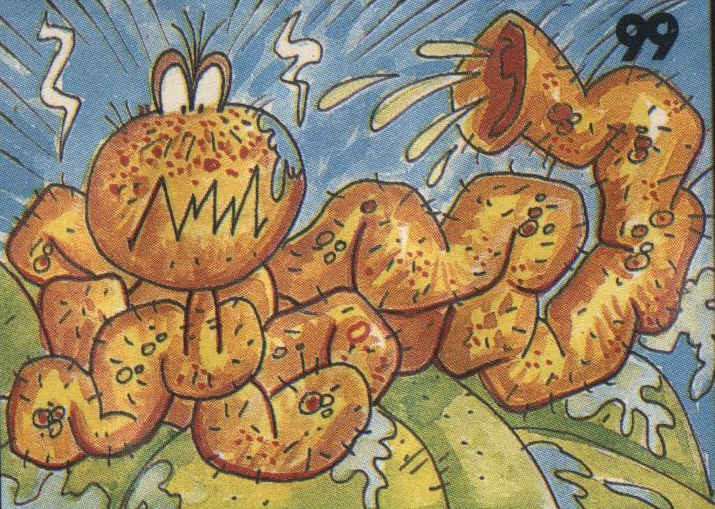 This is Diarreicusabundantis, and I think you know damn well what that means. Did I mention I'm especially horrified of the pestilence continually emanating from children? Truly horrendous, but another endearing design. You can't go wrong with anything that looks like a living intestine! Well, I guess until it causes this to happen: 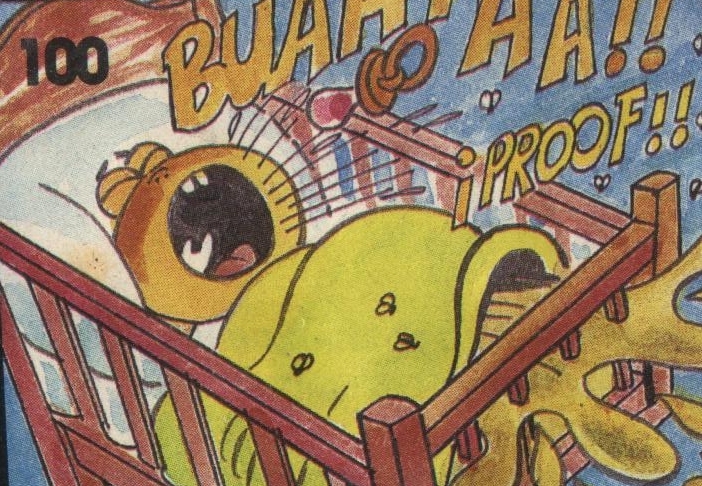 Hurl. I like how the baby almost looks like a huge representation of its own diarrhea germ. I'm pretty sure that's actually true of some babies. 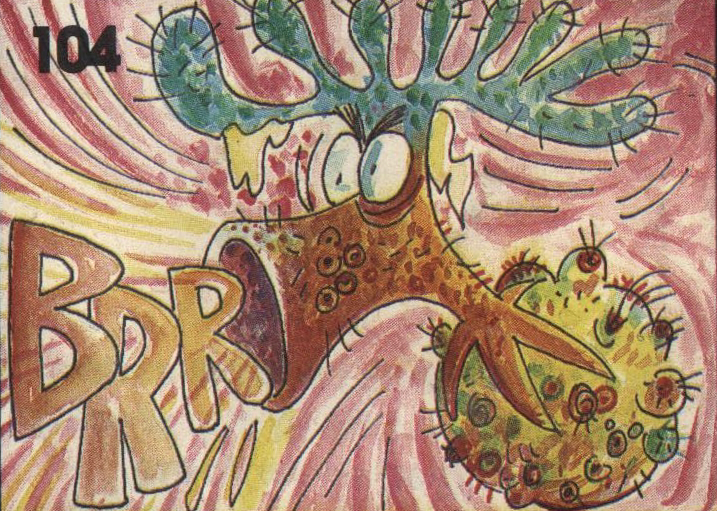 As the family eats an equally filthy, repulsive breakfast, we get to see this delightful belching-germ, like some sort of tubular, warty alien moose-chicken. Of course that's where burps come from! 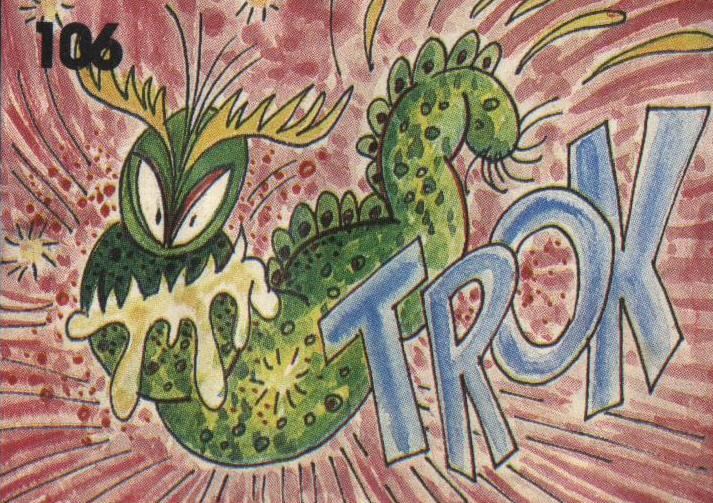 I'm not sure what this one is supposed to be, maybe just a glimpse of somethig passed on by the teen's belch, which does send bits of food flying all over his mom. Ew ew ew. 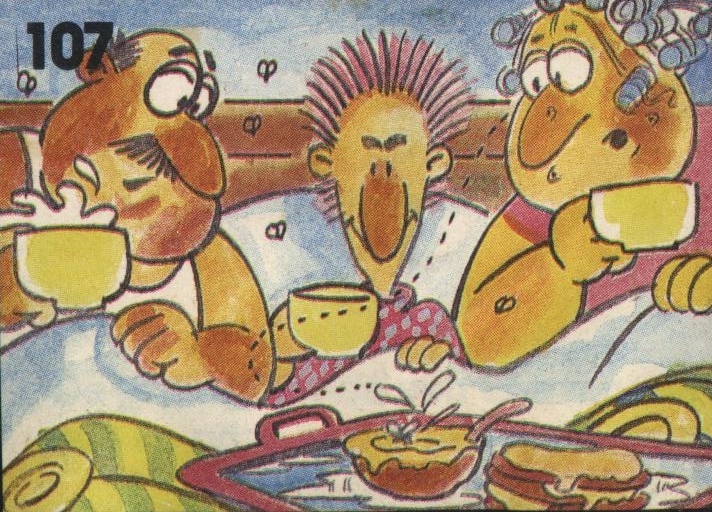 Breakfast time ends when a single, innocent little fly treats itself to a snack, which these wretched beast-people find simply too disgusting. 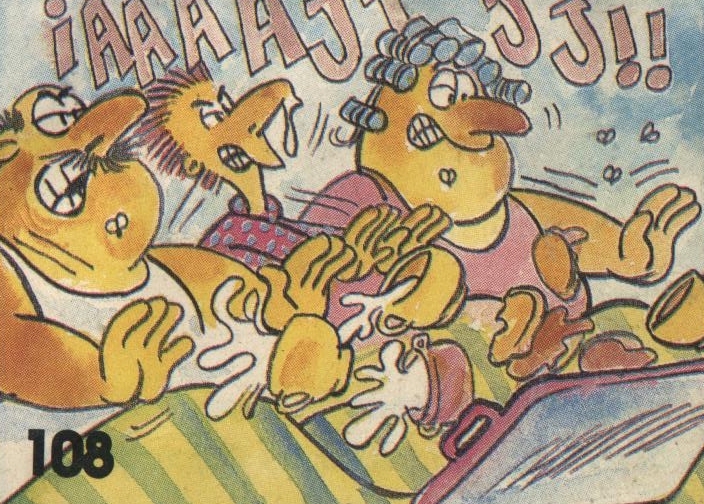 Love the irony here. Whenever I tell people I'm afraid of germs, I often hear "but you like bugs!" ...as though I have even remotely as much to fear from insects as I do from the phlegm-caked fingers of my own species. Our bodies swarm with about a million things that specifically evolved to infect our own kind. It's technically safer to give any random cockroach a big, wet smooch than it is to just shake hands with someone.