My most baffling Halloween finds (rejected by Cracked!)


No, not rejected for being too awesome, unfortunately. For the past few years, I've always managed to land the precious Halloween spot on Cracked.com (or close enough to it) with one of my monster articles. This year, unfortunately, I ran out of material and attempted to pitch an article based on weird, goofy and poorly made Halloween merchandise, combining some internet finds with stuff from my own collection - a Cracked version of my original Halloween blog.

The idea just didn't meet Cracked's standards - for every article that gets in, dozens have to be passed over for just not being quite as compelling, outrageous or attention-getting. I thought I'd put up what I submitted here, for those of you who might enjoy scavenging my waste from the Cracked reject pile!

"Groundbreakers" are a pretty common category of Halloween yard decor. You can buy all sorts of mummies, zombies and skeletons designed to look like they're climbing up out of their grave...but this is quite clearly a werewolf. A werewolf climbing out of the ground to present us with a dangling human heart. The only scenario in which this could ever make sense would be the final scene in a horror movie where this couple falls in love and the dude has like this whole sappy spiel about giving the chick his heart and they say it enough times through the script that you [i]know[/i] it's going to mean something later and then he gets bitten by both a zombie and a werewolf at the same time and she thinks he's dead so she buries him but years later she comes back to visit his grave and....thump.....what's that?.....th-thump....wh...oh god....th-thump th-thump TH-THUMP TH-THUMP GRRRRAAAOOOUUWWWWWWWLLLL *EEEEEEEEE* FADE TO BLACK OVER WET TEARING SOUNDS.

Jesus, is that an adult human skull? And a tombstone? This goose witch is like fifteen feet tall, and even though it's made of ceramic it's been sculpted so that the goose - and just the goose itself - looks like it's made out of wood, as though this figurine literally represents a gigantic, magical goose monster made of animate wood who haunts graveyards digging up corpses for its dark rituals. And what the hell is "K.I.P?" Kill In Peace? Kayak in Peace? There isn't a single K-word that makes sense here.

"Evil Clown Trailer Park." That's actually what this is called. This is the "Evil Clown Trailer Park" from Michael's ever-expanding Halloween Village collection, because your Halloween Village will never be complete without that one family the cops park out in front of each year. This isn't even necessarily a Halloween item. There are people who live and dress like this every day of the year. You can see them every weekday at any of the last surviving K-marts in America, being told by the same cashier for the tenth week in a row that they don't carry faygo. 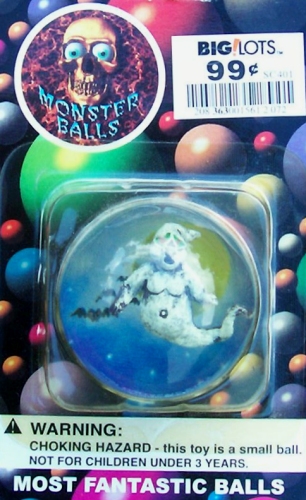 Who do monsters think they are, anyway? They already feast on our precious blood, plant their larvae in our abdomens, step on our dojos and and stick their tentacles in our anime chicks. Boldly pointing out how fantastic their haunted, detachable balls are is just adding insult to injury, even if they are only 99 cents at Big Lots. Hell, that's just saying "we've got SO MANY balls, we don't even need them all!" They're being total douchebags at this point, and they know nobody's going to say anything about it because they'll just flip inside out and dissolve someone's face or something. Man, fuck monsters! If it's "fun" blood, why do we have to be careful with it? What exactly does it infect you with? More fun? So much fun you die a hideously fun demise? Maybe you reanimate as some sort of fun zombie, oozing fun fluids and spreading a fun blight upon the world until all mankind is consumed in a fun pandemic of sheer enjoyment. Thank god somebody put it in a clearly labeled bag, or we could all be having fun right now. >Chilling. Skeleton crossing would have made some semblance of sense in the context of Halloween, especially since there's an entire skeleton hanging off the sign to drive home its point. This, however, warns us of a skull crossing. In what horrible nightmare scenario do you have to worry about fleshless, decapitated human heads trying to cross the street, and where exactly do they think they're going? Do skulls have some kind of mass migration every year to skull spawning pools? Are little skulls just rolling home from skull school? Maybe they're just trying to get back to the office after their lunch break. Yeah, that's it, there are offices out there that just hire a bunch of freaking skulls, right? 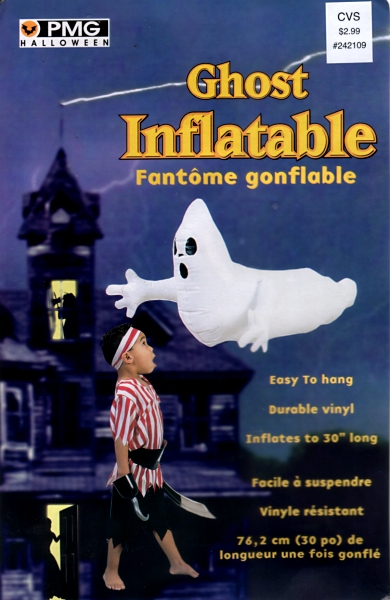 Even axe-wielding maniacs in blurry haunted mansions can't instill as much awe in a hovering pirate child as the magnificent ghost inflatable or fantome gonflable. 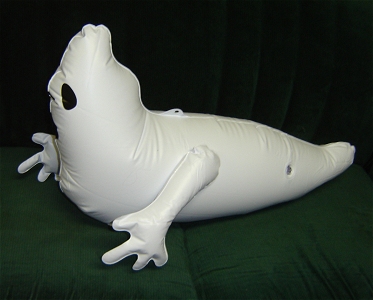 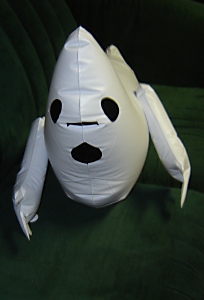 Unfortunately, the fully gonflabled specter looks even more like a sad, floppy dollop of spunk than it does on the package. There's a hole you can use to hang it from a ceiling like it's flying around, but it's still clearly molded in a slithering, slug-like position, which is honestly the closest this thing is gonna come to being scary. It's ten times more convincing if you think of it as the miserable, crawling soul of an aborted marshmallow peep, dragging itself back from marshmallow hell to watch YOU inflate in the microwave. 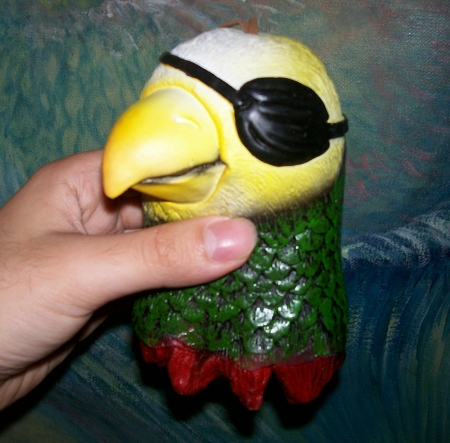 Pirates have certainly always had their place in the season, but this is what happens when you really start scraping the bottom of the barnacle-encrusted barrel. A gory, severed head is usually only scary because it belongs to either a human - which could have been you! - or a monster, which had to have been an entire monster at some point. Parrots, however, are somewhere between three toed sloths and banana slugs on the list of "scary" animals, so the only thing creepy about the severed head of a tropical bird are the depressing implications of wanton animal abuse. What did this parrot ever do to deserve this? He only had one god damn eye, he couldn't have even flown in a straight line. There is no possible story to this item that isn't sad, and nobody goes to a Halloween party to be sad. People go to Halloween parties to have empty, drunken sex with giant bumblebees and zombie cheerleaders.

We all know black cats are a major Halloween icon, but I can't imagine a weaker Halloween decoration than a rubber prop of a common, harmless household pet in a completely unremarkable standing pose. Honestly, who makes a fake cat with Halloween in mind and doesn't at least have it snarling or something? This pudgy, lopsided feline just looks like a mysterious fart wafted into its face. "That wasn't me....but nobody else is here!"

At least they did sculpt a full set of hairy balls on it, you know, for realism. Some Halloween decorations go for straightforward horror, with themes of gore, torture and death to piss off your fundamentalist neighbors and reserve your tootsie rolls for only the ballsiest kids on the block. Other Halloween decorations are cute, whimsical, and welcoming to even the youngest trick or treaters. Then...then there's this. The art style tells us this is supposed to be child friendly, but it's still a woman tied to a tree. There is absolutely no wholesome situation that this can represent, especially with that look of nervous excitement on her face. She can't wait to find out what the drunken, violent villagers are going to do with her before they light her on fire. "Gulp!" She seems to say, "not all of you at once! Wink, wink!"