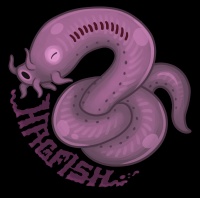 Get this on a shirt and buttons!

Since 2009, marine biologists have declared a single day out of October to be National Hagfish Day, a time to stop and appreciate the beauty of those creatures deemed ugly, frightening and unappetizing by the vapid and superficial public. Bogleech already does that 365 days a year, but I last devoted an article to hagfish themselves a whopping ten years ago, when I reviewed what was their only known merchandise at the time. I'm still proud of how that one reads from start to finish, but today, we're going to re-review the unique qualities that makes these ancient creatures so special; seventeen facts for the seventeenth of the month!