Last year, bogleech hosted its very first short horror-writing competition, and the results far exceeded any expectations I could have had. Every last one of your 130-something entries brought something new and interesting to the world of weird web fiction, whether you tapped into the subtle nightmare potential of something inconspicuous, offered a vivid glimpse into some alien reality or just something grotesquely insane, you vastly expanded the internet's selection of creative, truly quality horror literature.

And now, we're gonna do it again! From now until DECEMBER 31, 2013, I'm accepting YOUR original horror fiction through my E-MAIL. That's bogleech@hotmail.com. ENTER AS MANY STORIES AS YOU LIKE and please include whatever name and/or personal link you want to be credited under!

ALL MEDIUMS AND NARRATIVE STYLES WELCOME, ALWAYS. The term "creepypasta" has already grown over the years to encompass virtually any dark, unsettling or strange stories posted to the internet, and we're using the term even looser here. You can submit anything that you think qualifies as creepy fiction. Anything. A brief poem, a thousand-page novel, videos, comics, games, any tone and any style! Your stories, like horror itself, can take any form.

THE ONLY SOLID RULE is that it must be your own, original work! It also shouldn't already be available to read online; send me something new!

I WILL RESPOND within 2-3 days to every single submission that reaches me to let you know I've received it. If you do not get a reply, leave a comment on this page (no registration necessary) to let me know!

THERE WILL BE WINNERS AGAIN, although I found it virtually impossible to really narrow down any favorites the last time and I may actually put together some sort of secret voting panel for this round to take a bit of the pressure off. The top five submitters will once again get any t-shirt they want out of the bogleech store! NO EXPERIENCE? NO PROBLEM! Many of the greatest online horror tales, such as Candle Cove, even include deliberately unrefined grammar and spelling for a more raw and realistic feel. Even if that's not what you're going for, it's the story that really counts; don't stress over whether you can write like a "pro" or not! Some of last year's most popular entries were first-time writers!

AVOID CLICHES. The creepypasta wiki has this list of things they've seen submitted far too often to still be scary. You could, of course, very well rock something that's been done before, but we've all seen zombies, demons, ghosts, slendermen and evil video game glitches out the wazoo, so try not to recycle something you've seen before unless you're pretty sure you can put a bizarre new twist on it.

GO FOR WEIRD. Some of last year's submissions included man-eating carpets, a never-ending train, an inflatable Santa Claus and a cat's rear end. They were terrifying. If you think your idea is too ridiculous, too nonsensical, too childish or goofy or just plain odd, then good. You're on a great track. Don't tone it down! Don't reel it in! Let the weird flow through you.

INSPIRATION IS EVERYWHERE. Read up on real-world parasites, deep-sea organisms and rare diseases. Think back to the odd things that inexplicably scared you as a child. Recall your most traumatizingly abstract nightmares. Pick something out of the room and try to imagine what unnatural thing it could do to positively chill your spine. This isn't a "rule" and you can feel free to ignore it if you're not sure what I'm talking about, but the only big difficulty on my end last year was converting such a wide variety of text files to plain HTML.

Again, ignore this if you don't know what I mean, but if it isn't any trouble, you can make this process slightly faster for me by writing and submitting your story in either a plain text (.txt) file or a wordpad rtf


THE GOLDEN RULE OF HORROR:

It's the same thing I said last year, and you guys seemed to take it to heart with great success: LESS EXPLANATION, MORE MYSTERY! Before you offer too much background information on your oozing monsters and unnatural phenomenon, consider whether or not its explanation really makes it creepier. More often than not, the creepiest answers of all are none at all. The root of most human fear is the unknown and unknowable! 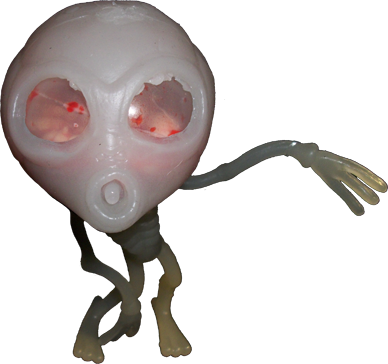 LAST YEAR'S ARCHIVE - There's no better way to get in the right mood than to browse around the previous entries! Don't just look at the "winners" and "runners up"...dozens of my top favorites still couldn't make those for reasons of sheer time and space! NOW GET OUT THERE AND WEIRD ME OUT!