So the creators of The Trash Pack have chosen this fine Spooksmas to debut another, very-nearly-as-grotesque toy line, and I'll just let its commercial fill you in.

Yes, Mutant Mania, a series of tiny yet finely detailed monster wrestlers with interchangeable heads, torsos and legs held together by a stretchy, rubbery core. It's a fun premise with a unique execution, and like other Moose toy lines, it offers a butt-load of different characters to collect, in an art style that could very easily share the same universe as the Trashies, and most likely does.

Unfortunately, the character designs are quite the mixed bag. I guess I can't get as enthused for an all-humanoid series as I can for one where pizza boxes and fish corpses qualify as characters, but there are still some interesting nuggets throughout, so let's review Yes 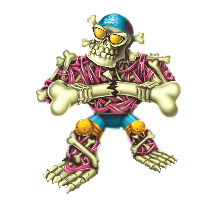 One member of each "team" seems to get much prettier, better shaded artwork on the official site, I guess the ones they're using as their main mascots. Bone Cracker is the obligatory skeleton guy, but not a properly assembled skeleton. Rather, he's a big mass of broken bones held together in a humanoid shape by strands of pinkish tissue...or maybe that's bubble gum. Anyway, I'm glad a mass of broken bones held together with gum is also wearing sunglasses. 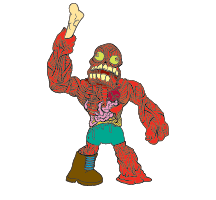 This is one of the "EVIL ZOMBOIDS," and a beautifully nasty, skinned corpse, complete with visible entrails. One of his legs is even half-melted, implying that he's been through even more than mere excoriation. The skin was probably just the first thing to go when the doomsday bomb went off. 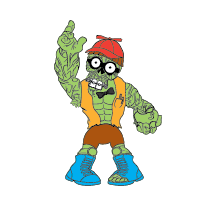 Are we really still at a point where this "nerd" cliche is even a thing among kids? Do they even call each other "nerds" anymore for wearing glasses or liking school? Whatever. It's pretty funny either way. The official website says he "bores opponents to death" by talking about math. That is awfully non-violent for a mutated zombie who entered a wrestling tournament, unless they literally mean bored to death, in which case that is some hardcore superpower. Maybe it's a Brown Note kind of effect, and he just knows how to recite exactly the right mathematical formula that, somehow, makes somebody die by hearing it. 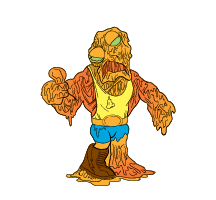 Oh man, nasty. Even nastier than gutless. This is a guy straight up melting because of radiation, or something, and look closely; he's holding out his own ear, presumably after it fell off. That's a pretty amazing and menacing battle intro, like the other guy is spouting off all these threats of bodily harm and Atomic Drop is just like "what's that? I can't hear you over the sound of ALL THIS FLESH SLOUGHING OFF." The old "holding your own eyeballs" standby. Popularized by "Aaahh!! Real Monsters!" but definitely older than that. I like the implication that someone might get challenged to "arm wrestling" and be like "oh that's not so bad" and didn't know it meant they'd be wrestling a man of entirely arms. That's not what you thought you agreed to! CURSE YOU, MUTANT WRESTLING LEAGUE, AND YOUR INSIDIOUS WORD PLAY. 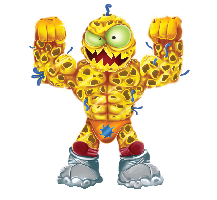 This is one of the limited edition space characters, and really setting off my trypophilia. I've found irregularly clustered holes extremely appealing all my life, putting my artistic tastes at serious odds with a majority of other people I know. I appreciate that there are little tentacles sticking out of just some of this guy's craters, no indication of what they might be attached to. 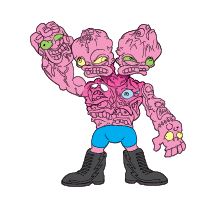 Haha. He's made entirely out of skulls, but apparently none of them are particularly intelligent skulls. Not even collectively? Surely they can figure some stuff out through trial and error, like an ant colony. 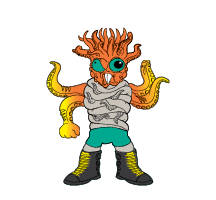 I like the "bandaged" torso that's just more tentacles, or maybe it's supposed to look like a straight jacket, like how some wrestlers in the 80's had a whole "escaped madman" gimmick and would show up strapped to a gourney and everything, I think. I never watched wrestling. I'm pretty sure that was a thing though. Maybe Shocktopus is so deluded, he THINKS someone put him in a straight jacket and he's pissed as hell about it, so somebody actually probably should get him the help he needs, but since this is a world of mutants made out of skulls and shit, they're just gonna go ahead and let him do his thing. It both is and isn't a better world than ours. 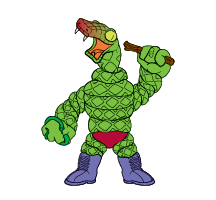 There are multiple snake characters, including a rattlesnake man dressed as a cowboy, but this one is almost entirely a giant snake just coiled up in the approximate shape of a person, with fists that I'm going to wager are attached to severed arms it carries around, or maybe there's just a whole headless corpse underneath the snake. Why is it even necessary to hold a particular shape? Does a wrestling league full of giant bugs and shit really discriminate against just a huge talking snake in the ring? 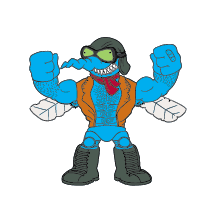 This mosquito guy is cute, you can't go wrong with putting flight goggles on an insectoid, though his official bio emphasizes "his" love of feeding on blood. Male mosquitoes can't process blood! Maybe Mozzumi was a man and a male mosquito that got fused together by atomic waste, but then he got bitten by a vampire. Actually, maybe all the bloodsucking male mosquito characters were bitten by vampires. I realize they could also just be transmen, but I just really like my vampire idea. 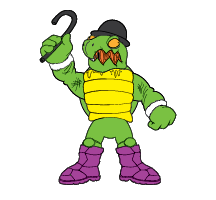 A giant snapping turtle in a bowler hat that beats you up with a cane is really really funny to me. 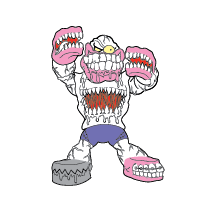 I feel like this is the single scariest of the line, just a grinning man of gums, teeth and veiny white flesh. I love how one of his feet is just a metal trap, and his other "foot" has braces on it. Why do you even care about your foot-teeth being properly aligned, Chomper? Don't you just kick people with them anyway? 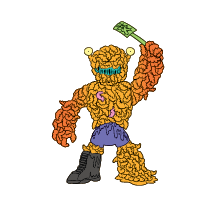 Okay, you got me. This one is the only reason I really bothered reviewing any of these guys, and I just had to pad it out to thirteen because that's what I do. Thirteen is the minimal Halloween season list number. Do you know how badly I've wanted, all my life, for there to be a figure made entirely of maggots? Do you know how badly I've wanted anything to be made entirely of maggots, that I didn't have to come up with myself? None of these other characters even matter to me in light of Maggot Face's existence. I just need a bunch of Maggot Face in my life. I need this line to be successfully almost entirely for the increasing odds of other Maggot Face merchandise.


Mutant Mania is a fun concept with some nice looking toys, but as you can see, the truly weird, monstrous characters are kind of slim picking. Hopefully, they might expand upon it with some even stranger characters, maybe even cross over a bit with The Trash Pack and have some rotten fish and giant germ people. They don't even have a fly guy yet, just a "bee" that kinda looks like a fly.


To offer one more critique...isn't this mutant wrestling league a bit of a dudefest, too? You telling me they've got all these hot-ass ripped men made of worms and snakes and no hot-ass ripped ladies made of worms and snakes? It's 2014, Mutant Mania wrestling league. Or I guess for you it might be like 2000014, in which case this is even more glaring.