It was all the way back in August that I first discovered a wonderful new toy line exclusive to Target stores; a toy line that has quietly creeped into their "bargain" section with no fanfare, no advertising, not even so much as an official webpage, which would have been the very least this series deserves. Not only are these my favorite new item to review for the season, but already quite possibly one of my favorite toy series ever, so cool that even as I approach a complete set, I've decided to split my review of the series into multiple parts, just so the fun of sharing them with you can run a little longer than one measly post. Why are they that special? One look at the packaging should make it quite clear:

Yes, Slimy Sludge. A series of tiny, cheap-as-hell monster toys who come packed in pouches of ooze and belong to two possible "teams," the Sludge Monsters or Rot Zombies. There couldn't possibly have been a more "me" toy series landing directly in my Halloween season, and whoever actually conceived and designed these characters is either a kindred spirit to an uncanny degree or has been telepathically reading my subconscious from afar. This is practically Bogleech: the discount toy line, even featuring a character who IS a giant leech, made of slime. Are you kidding me. I want to marry these things. Almost every single character you can get is pure gold, and with eight per team, there are sixteen gooey ghouls in all! We'll be splitting this up into three or four articles, alternating the "teams," and we'll see if I can get ahold of the last few figures I need by Halloween! 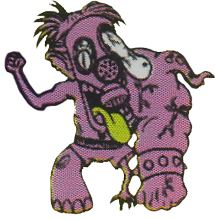 TOXIC TOM: This seems like a good enough starting point as any, since he's the one dominating the "Rot Zombie" packaging art, and they made an excellent choice for the face of the undead gang. Right off the bat, you can see that these guys are way more than just "zombies" in the sense of reanimated human corpses. No, these guys are mutant zombies, and we're left wondering whether they mutated before or after the first time they died. This gas masked beast features everything you expect out of a good toxic abomination, from melting eyeballs to the classic mis-placed cephalopod tentacle, and to top it all off, he looks like the kind of raving maniac his own friends have to keep locked up until they need something with a giant arm to indiscriminately smash everything that gets in its way. 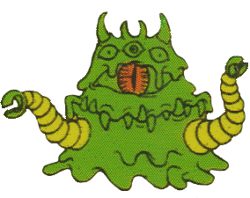 SLIMEBOT: This one, the other hand, seems to be the main mascot for the Sludge Monster packs, and apparently, his mechanical-looking claws are enough for him to have "bot" in his name. I suppose it's possible that Slimebot is packing more mechanical elements under all the ooze, though it's hard to imagine how Slimebot works or why it exists. Was it a robot that became a sludge monster when it fell in a vat of mutagenic acid? A sludge monster that engulfed and took control of an old computer? A cyborg built by its fellow monsters to uphold Sludge Monster law? We may never know.never know. 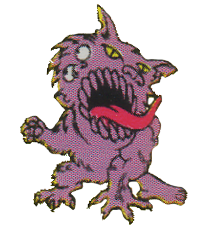 BOOGY THE BOYDOG: Originally, I thought I'd like the Sludge Monsters several times more than the Rot Zombies, but each team really brings a lot to the table. Boogy's circular, fang-lined maw and protruding tongue are perfectly nightmarish, if only thanks to the fused "dog" and "boy" faces who have to share the same grisly gullet. It's a little disappointing how this idea seems to have been lost in the translation to plastic figure, the boy-face basically becoming a cluster of nondescript eyeballs, but it's the thought that counts. I'm going to hazard a guess that they used to be a separate boy and his beloved pet, until they were fused together by whatever it is that screwed up the other zombies. Again, no telling whether this happened while they were still alive or as a part of their resurrection. I'm also going to assume the "dog" half is usually in control, with the still-conscious child just along for the ride and stuck tasting everything his dead, monster dog considers food. What can I say, hypothetical scenarios in which children suffer bizarre and morbid fates are practically my livelihood. 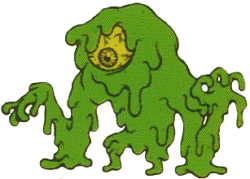 LARGE EYE LARRY: Simple though he is, Larry is tied for one of favorites of the Sludge Monsters. He just has extreme proportions I find really pleasing, with those tiny little legs and huge orangutan-like arms. A drippy ooze guy with one big eyeball almost never fails to delight, and I love how having one large eye is apparently Larry's whole claim to fame even if some of the other Sludge Monsters have equally large, prominent eyeballs and usually a few extra, regular sized ones to boot. Maybe Larry's Large Eye has its own unique and mysterious powers? Maybe it's just a very special Large Eye, even if it's all alone and not even technically the largest in town. If it were, he would be Largest Eye Larry, and that would just go to his head and make him act like a big asshole. Actually, that happened once, but he got over it and everybody learned a valuable lesson about accepting your limitations.


We'll leave off on that high note for now, and continue going through these weirdos four at a time across the next few weeks, as I continue my grueling hunt for their most elusive friends! If you've got a Target near you, try looking for these around the toy aisle - usually on an end cap of off-brand "$5 And Under" items. Hit me up if you do get any; maybe you'll find the missing characters before I do, and we can make a deal!