This was, originally, going to be the very last we would ever hear about Slimy Sludge for the forseeable future, the last four characters in the series...or so I thought. 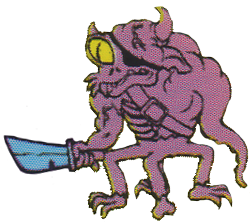 Sadly, this is the single figure I was never able to find...and neither has anyone else. It seems like they might have plumb forgot to even ship out any packs with Mitches in them, and that's too bad, because the more I look at this guy, the more I find to appreciate. He has a lot of unique characteristics going for him, like a tentacle arm, exposed ribs, a missing eye, four legs and a malformed cow head, yet the fact that he owns a machete is apparently what he considers his most noteworthy trait. How much does Mitch Machete love his machete? Well, for starters, he adopted it as his last name, which can clearly only mean that he married it. 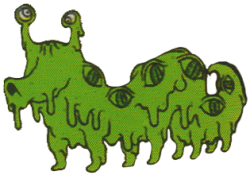 Tied with Larry as my favorite Sludge Monster, Slimepede fills a necessary gap as the only "bug" based monster, and I'm glad they opted for a gooey caterpillar-slug with a noot snoot and rows of disturbingly human eyes. Slimepede is at once adorable and genuinely creepy; you can just imagine those goofy eyestalks mindlessly waving around as it creeps up on its prey, who could have already been glued in place by projectile slime, ala velvet worms, which pedey also somewhat resembles. I also like the anthropomorphic shape to the legs; between that and the eyes, I feel like Slimepede may have once been multiple human beings, maybe all standing in a row when they got splashed by alien phlegm, or whatever happened. Or maybe someone made a human centipede, and then that fell into a vat of mutant sludge monster mucus by "accident" and totally not me pushing it in there to see what would happen. You know, after making it. 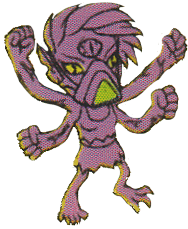 There's often just one explicit female in a group of weird monsters, and she's usually the least monstrous of them all. This is normally a bit of a let-down, but as human as she looks, Vera Fast is definitely one of the coolest and most menacing of the Rot Zombies, with a whole punk-ass wasteland raider motif and presumably terrifying running speed, if her name is any indication. She's also one of the few Rot Zombies without any obvious weapon, which only makes her scarier. She has four arms she could be holding guns or hatchets or chainsaw-swords with, but no. She feels her bare hands are all she ever needs, dashing around and possibly just ripping the spines out of things, then fatally shoving those spines into the enemies who don't have spines.

Another point in Vera's favor? The most human-looking individual in a group of monsters is almost always one of the highest ranking, if not the leader, so while I'm weaving all these complex headcanons as it is, I'm gonna go ahead and declare Vera Fast the feared Wasteland Queen of the Rot Zombies. 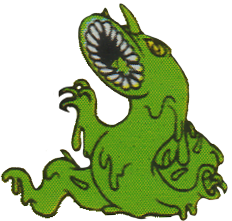 So, now the Rot Zombies have an appointed leader, and that just leaves the Sludge Monsters in need of a hierarchy. We may as well give the crown to the very last one we're reviewing, who is nothing but a clawed, barbed lamprey-leech monster with the single best name in the series, if not one of my new favorite character names of all time: Billy Terrify. That's his name. Billy. Terrify. Is it stupidly awesome, or awesomely stupid? It's like some old folk name for a legendary bogeyman, who just happens to be a thorny phlegm snake with a giant, fanged sucker-face. He's actually the smallest of the Sludge Monsters in overall mass, which I feel kind of makes him even better "boss" material. It's always the little guy, you know?


The story of Slimy Sludge According to Bogleech.com almost ended here, until I made a discovery that would ROCK the very foundations of the completely non-existent Slimy Sludge fandom that I made up.