The final stage, "The Palace in the Sky," introduces little in the way of really weird or inventive enemies, but still maintains the quality we've seen in prior stages, and builds up to the final boss, Medusa!

I like the idea of a giant, flying devil-faced echinoderm just smacking into you, sticking there, and chewing on your flesh. Too bad they don't really do anything like that in the game itself; just another generic flying thing.

Likewise, these plucked, fanged flowers just zip around the screen in packs. Cool, though; I know it's not the idea here, but I can just imagine whole fields of flowers routinely "taken over by evil spirits" en masse and scattering in the wind as part of their natural life cycle. Sorry, I'd rather stay indoors today, it's murderous demonic blossom season.

They unfortunately don't illustrate it, but this cloaked cyclops actually splits into pieces and keeps coming when it takes enough damage. I guess that's the "revenge" part.

They seemed to be running out of new things to say at this point, and I suppose I'm coming up short for this one too. I do think the goofy pink nose is an unusual and creative feature for a nearly faceless, robed phantom.

Another dull one, more of an obstacle or trap than an enemy you can really "fight." Show me something cool!

Or some huge tits, sure. Back in the 80's, naked lady boobs in an NES manual felt like a big deal to us kids; a filthy, filthy secret between us and our game collection. A couple decades later, us grown-ups can straight-up buy a hooker in a video game, then run her over with your porsche, yet children's games have only gotten more uptight and could never get away with a cartoon drawing of where milk comes from.

I think they actually mean "thanatos." Neat to give Medusa's hair-snakes their own name and personality, though.

Finally, we have Medusa herself, the game's primary antagonist and final boss. This fat, warty cyclops fits in well alongside such classic Nintendo villains as Bowser, Wart, King Dedede and Ganon. Unfortunately, this is one of the few characters to be given a total overhaul in the new "uprising" game, opting for a drastically more serious, more "attractive" character design.

I can honestly understand giving Medusa a more elaborate and more menacing appearance, I really do, but what was wrong with her being a bloated, reptilian, cycloptic ogress? Why does every female villain and monster need to have generic sex appeal? The new design might have technical artistic quality, but shows virtually no creativity or character at all, and feels interchangeable with all the most conventional interpretations of Medusa throughout popular culture. The talented Niklas Jansson shows just how cool Medusa still could have looked here, along with other gorgeous interpretations of monsters you should immediately recognize.

I know my perspective on this won't be a popular one; to this day, I feel similar sentiments towards Ganondorf from the Zelda games. Pig-monster Ganon is at least a million kinds of cooler, no contest.

Not ready to go out on such a downer, I've saved one of the best for last, although Eggplant Wizard actually appears in all of the "labyrinths" between regular stages. One of the weirdest and most frustrating foes in any early Nintendo title, this purple nightmare's projectiles were tricky to dodge and really did transform you instantly into an eggplant with legs, completely and utterly defenseless until you found the one "hospital" room in the entire sprawling, nonlinear and repetitive maze, unmarked on your map. Once you even figured out where the damn place was, you could find yourself backtracking there a dozen times - assuming you didn't get your purple ass eaten by ghosts, or something.

It's worth pointing out that in Japan, eggplants are the classic "yucky vegetable" that children are universally expected to detest, like how American cartoons always treated asparagus, spinach, broccoli...I guess anything good for you, actually. Eggplants are horrible poison in a number of other video games, including Bubble Bobble and Adventure Island. 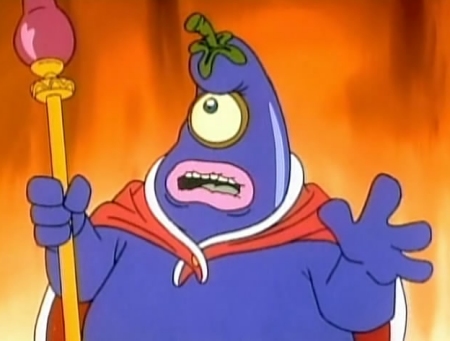 The Eggplant Wizard's strange and comical concept is probably what landed him a major role in the notoriously bizarre cartoon series Captain N: The Gamemaster, where he worked alongside King Hippo (of the game Punch-Out) as a minion of Metroid villain Mother Brain. His design in the show was a little blobbier and uglier, which I'm quite fond of, and his personality that of a sniveling, imbecilic coward, which I have to say always endeared him to me more than anyone else in the admittedly stupid show. 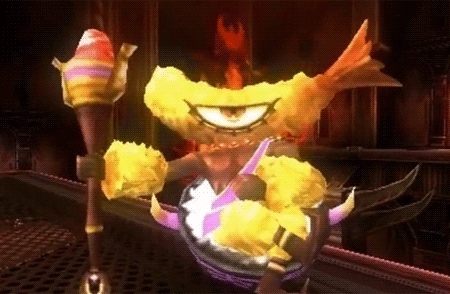 In Kid Icarus: Uprising, the Eggplant Wizard not only returns completely faithful to his 1986 debut, but is joined by another nefarious culinary sorcerer, the Tempura Wizard. Are they ancient allies, or bitter rivals?

I've said all I can for now on Kid Icarus monsters. Hopefully, at least some of you didn't find this a complete and utter waste of your time!