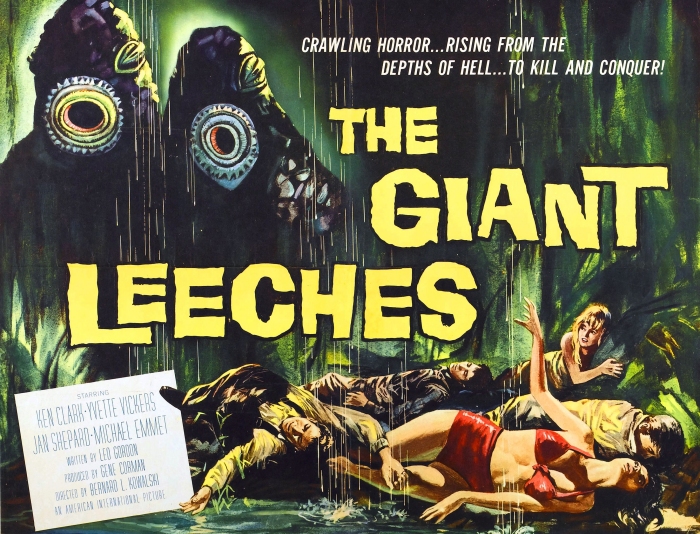 It's amazing, really, to consider that I've written about slimy, boneless, bloodsucking things off and on for about a decade, on a website called Bogleech, and until now had never really devoted a full article to actual leeches, or annelids of the order Hirudinea. Why, I really can't say. Maybe it felt a little too obvious. Maybe they just seemed so special, I didn't feel like just another conventional creature article could even do them justice, but until I can code a webpage to actually reach out of the monitor and suck human blood, nothing's ever really going to feel climactic enough. I've put this off for far too long. 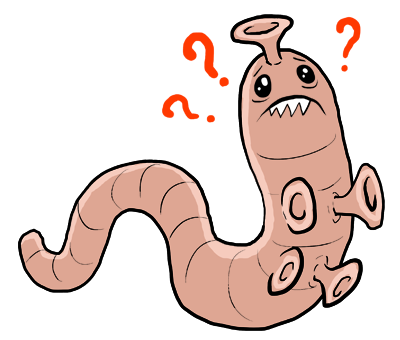 I can still remember the very first time I ever heard the word "leech." I don't recall my precise age, but I recall that I was tiny. An older, snottier pre-teen passingly mentioned a local stream being "full of leeches," which he described for me only as "worms with suction cups, that stick on you and suck your blood." I was fascinated instantly. A blood-sucking worm? With suction cups? What kind of worm? What kind of suction cups?! Being an older, snottier pre-teen, he spitefully refused to nurture my developing mind. "I said it's a worm with suction cups. No, I'm not going draw it!" Even adults were of little help. "It's just a worm," they said. "It's a worm that bites." My mind soared with the infinite possible ways such a thing could actually look or function. Nobody seemed to understand how tormentingly vague they were being, how important it felt that I know exactly what these new mystery creatures looked like and exactly how they obtained blood. Alone in my quest, I would slowly but steadily piece together a deeper knowledge of the Hirudinae from second-hand biology books, not intimately detailed, but enough to solve a few of the mysterious denied me by the apathy of obnoxious tweens and exhausted adults. I now knew that a typical leech was similar in many respects to an earthworm, and indeed closely related, but armed with a single sucker at each end of its body - one of which concealed the legendary, vampiric feeding orifice. It still remained, of course, to actually meet one of the creatures in person, and while some of you lucky bastards have encountered more leeches than you would have preferred, I personally wouldn't find a single living example until nearly 2010, after nearly twenty seven solid years of actively hunting invertebrates in swamps, streams, ponds and forests. My leech was found in the botanical gardens at Florida Technical Institute, curled under a damp plank of wood in a pit of creamy, green-black mud. It never showed up well on camera, but was a dead ringer for the slug-eater shown here, and readily reduced small earthworms to crumpled, ghost-white tubes of flesh for the few special months it survived in my care.


Leeches are most commonly associated with water and blood, but many if not most species are omnivorous scavengers or free-living predators, and may be amphibious or completely terrestrial, comfortable so long as they can keep reasonably moist. On land, they may slither gracefully through the underbrush or walk sucker-over-sucker like some ridiculous, rubbery inchworm, as we can see here. Most leeches can be placed into one of only a few large orders, the most familiar of which are by far the Gnathobdela, or "jawed" leeches. It was this group to which my little Floridian friend almost certainly belonged, making her a close cousin to the famous "medical" leech, Hirudo medicinalis. In centuries past, illnesses of both the mind and body were widely attributed to an impurity or even excess of blood, and the practice of bloodletting through leech therapy was believed to heal a wide variety of unhealthy conditions. Though this pseudoscience crumbled by the 20th century, leeches would eventually return to the medical world as a relatively inexpensive yet highly effective means of draining pooled or coagulated blood near the skin's surface. Hirudin, a compound in leech saliva, remains one of the most effective anticoagulants known to modern science, difficult and expensive to synthesize artificially, making leech farming a profitable industry once again. Gnathobdela are known as "jawed" leeches for a reason, sporting up to three opposing, tooth-lined jaws in the center of their muscular oral disc. Twisting in and out towards a central point, it's not unfair to compare these tiny structures to organic rotary saws, so tiny that the bite of even a large medical leech is virtually painless. Detrivorous species may use these jaws for chewing and swallowing soft food particles, while carnivores may rasp a hole in the body walls of invertebrate prey and steadily suction out the soft, juicy innards. One of the most unusual of the jawed leeches is the delightfully named Tyrannobdella rex, formally described in only 2010. This "new T-rex" hails, as a frightening leech ought to, from the waters of the Amazon, where it specializes in entering the mouth, throat or nostrils of mammalian hosts - including humans. Uniquely, it has only one large jaw, its single row of eight teeth by far the largest of any known species. Like many other annelids, leeches are hermaphrodites with both male and female reproductive organs, each partner fertilizing the other during mating. Eggs may be laid individually, in clumps or in fuzzy, spongy cocoons, and many species will carry their brood under their own body, gathering prey such as insects or aquatic snails to feed their little ones directly. How precious can they get? Just look at that proud, goofy smile, right under mama's dopey, close-set little eyes. Oh yeah, did I mention their eyes?

Leeches of almost every variety frequently possess at least a single pair of tiny, beady eyes, though they may have up to sixteen, arranged in patterns as varied as those of spiders. In some species, the frontmost few segments may also flare out into a simple, distinct "head!" The revelation that these animals had eyes didn't come quite so late or so abruptly as it did with Ticks, but certainly took its sweet time regardless; they're often difficult to see against the skin of darker species, and not always mentioned in generic anatomical descriptions. As you might have guessed, not all leeches are of the "jawed" variety; the order Rhynchobdellida lack slicing teeth, but compensate with a drilling proboscis, sometimes lined with tiny barbs, and also include both predators and vampires. It's this order that displays the most parental care, with even parasitic varieties carrying their babies to new hosts! The proboscis-bearing leeches also boast the very largest living leech known to man; another rare Amazonian bloodsucker, Haementeria ghilianii, its wiry proboscis nearly four inches in length. Once thought extinct, a single pair of adults were recovered from a pond in the 1970's and subsequently established a successful captive breeding colony. One of the original pair, nicknamed Grandma Moses, gave birth to more than 700 young in her lifetime.


The third major category of leeches are perhaps the most mysterious. Lacking a proboscis or jaws of any kind, they simply slurp earthworms and other soft-bodied prey alive and whole into their gaping throats, and slither with almost snake-like speed. These gluttons are traditionally classified as Pharyngobdella, a "toothless" sister group to the Gnathobdella, though some may in fact represent "proboscisless" Rhynchobdellida. An especially unusual "swallowing" leech is Americobdella valdiviana, the only species in its unique genus. Possessing very rudimentary jaws, it likely represents an intermediate form between those with jaws and those without. Like most things in nature, leeches are at their most exotic in the sea, where they may appear warty, knobbly, fuzzy and strikingly colorful, sometimes blending in beautifully with a tropical reef environment, or in this case, suspiciously resembling a seahorse. Seriously, back up and tell me that's not deliberate mimicry. It's not a formally documented defense mechanism, but I'm not even the only one to notice the connection, and there's a lot a squishy parasite could gain from a disguise as a crunchy, spiny fish. Maybe we need a marine biologist to weigh in. Maybe a new study is in order! More pictures at the Source!

One of the strangest leeches by far might be Croatobranchus mestrovi, an example of a troglobytic leech, completely adapted to subterranean cave systems. Lined with finger-like growths that may be breathing appendages, its oral sucker also branches into eight short "tentacles" of unknown function, its diet and reproductive habits yet to be unraveled. For such widespread creatures, leeches always seem to be hiding something new. Bogleech got its name rather spur of the moment, when I slapped together one of my favorite animals with my favorite synonym for its preferred swampy, mucky habitat. As the site and its fanbase have grown over the past ten years, I feel like my bond with these boneless ghouls has only deepened. Even having seen only a couple in person, I'm pretty sure leeches would be among the top contenders for my patronus, and I'm proud that my lame artistic and literary legacy is associated with their esteemed name.

The obvious next step? To finally just up and buy some leeches from a good private supplier and see how they fare. Prices are a little steep, but I wouldn't be the first to consider them pet material.